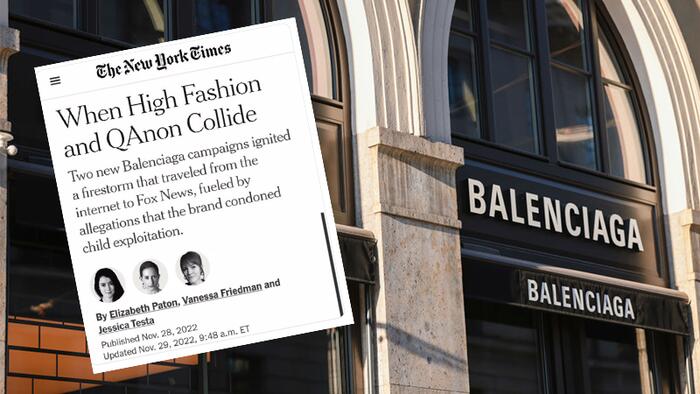 In the wake of the ongoing Balenciaga pedophilia propaganda scandal, the New York Times produced a piece Tuesday that essentially claimed the entire thing is some sort of QAnon conspiracy theory.

In the report, the Times suggests that only the likes of QAnon, Tucker Carlson, The New York Post, and Fox News are spreading the idea that the luxury fashion brand condones child exploitation.

The battle is already engaged people. Sooner or later, you must choose a side. This is not a time for luke-warm people.https://t.co/5bxjWlf8hu

The piece states “they ignited a firestorm that traveled from the internet to Fox News, fueled by allegations that Balenciaga condoned child exploitation. The controversy has become one of the most explicit collisions of internet culture, politics, fashion and conspiracy theories to date.”

It further posits that “As online criticism of the campaigns spread, the story was picked up across right-leaning media outlets, including The New York Post and the prime time Fox News show Tucker Carlson Tonight. The show has helped to publicize and mainstream QAnon, the internet conspiracy theory that ‘a group of Satan-worshiping elites who run a child sex ring are trying to control our politics and media.’”

Hey @nytimes, how was the ad NOT child exploitation? From the bondage-gear clad teddy bears to the legal documents related to child pornography in the frame, where’s the conspiracy exactly? pic.twitter.com/Q4z9ECbabJ

A reminder of the shoot in question…

Go down the rabbit hole and it’s even more brutal…

This cannot be accepted, they’re not even hiding it anymore. Stop grooming out children. pic.twitter.com/MBRRUofk5P

A thread on WHO is REALLY behind the #Balenciaga ads:

The Devil In Disguise: Lotta Volkova

1. She has been one of the main stylist in Balenciaga since 2014.
2.She has a relationship with an accused pedophile.
3. We can’t only boycott #Balenciaga but also the people behind it. pic.twitter.com/RjDYU283wj

Why do clearly sick and disturbed people so often get into positions of power and influence? https://t.co/qqWnZ1rjGk

The fashion company even apologised and brought a lawsuit against the ad agency responsible.

Many charged that the Times is protecting the fashion label:

The gas lighting in this article by not 1 or 2, but 3 writers for @nytimes is disgusting.
Pedophilia has nothing to do w/politics.
It isn’t a conspiracy theory. Balenciaga knows what they did.@nytimes stop protecting your rich friends. #BalenciagaGatehttps://t.co/m0vQGkpmWX