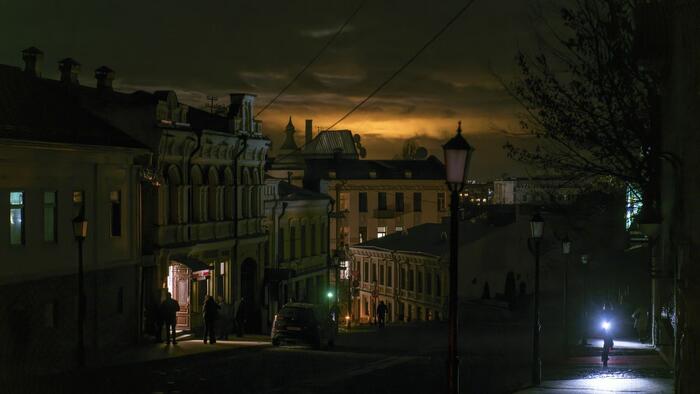 
Large swathes of Ukraine still remain in the dark, with emergency and utility crews currently racing to restore power and heat to major cities, at a moment Ukrainian President Volodymyr Zelensky is warning the public to brace for more major Russian airstrikes.

Zelensky told the country Sunday night that the Russians “are preparing new strikes and as long as they have missiles, they won’t stop.” Last week saw some of the most brutal and large-scale waves of aerial strikes on Ukraine’s energy grid since the war began, leaving at least 10 million Ukrainians without power.

“The upcoming week can be as hard as the one that passed,” Zelensky added in the fresh remarks. Even parts of the country that have had power must endure rolling emergency blackouts. “We understand that the terrorists are planning new strikes. We know this for a fact,” Zelensky forewarned.

Kyiv Mayor Vitali Klitschko has said that millions within the capital city might have to be evacuated as temperatures continue to plunge, and as it sees the first waves of snowfall this month. Missile attacks have shut down essential services, and warming centers and shelters have been set up where there is availability.

But President Zelensky in a rare moment suggesting internal government infighting lashed out at his own officials:

“I know that, unfortunately, not in all cities the local government has done a good job. In particular, there are many complaints in Kyiv. I expect better quality work from the mayor’s office… it is the responsibility of every local official to ensure that everything that should be there for people actually works,” the president said.

Western countries are reportedly getting ready to boost humanitarian aid efforts as the coldest months of the year are just around the corner for Ukrainians.

The New York Times on Sunday also reported that the weather is an ever more difficult factor on the battlefield: “Increasingly frigid winter weather presented new challenges for Ukraine on Sunday as mud churned up the battlefield and snowfall made the government’s task of restoring power supplies devastated by weeks of Russian bombing all the more urgent.”

“The state energy company, Ukrenergo, said that there was enough electricity to cover 80 percent of the country’s consumption needs because nuclear power stations, disconnected from the national grid by Russian attacks last week, had been brought back online,” NYT continued.

In case you wondered why Russia attacks the power grid in Ukraine. Lessons learned from US/NATO. pic.twitter.com/OPSyax9vBh

The government meanwhile has continued calling on Ukrainians to make conscious efforts at cutting back electricity usage: “If consumption increases in the evening, the number of outages may increase,” Zelensky had warned over the weekend. “This once again shows how important it is now to save power and consume it rationally.”