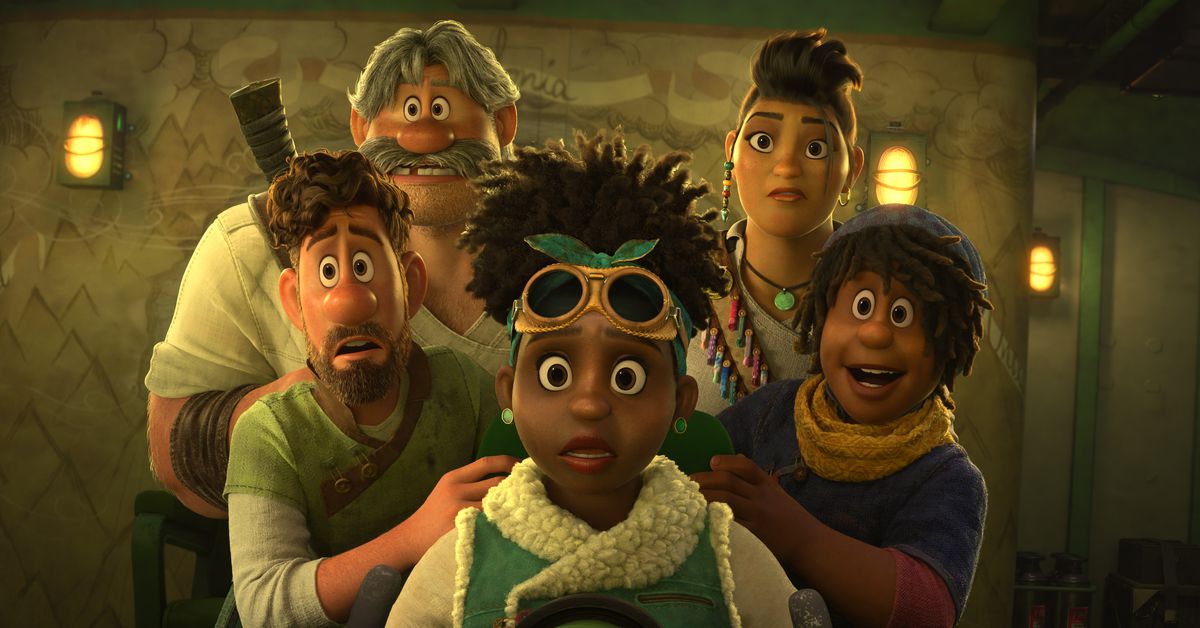 
In Disney Animation Studios’ new feature film Strange World, farmer Searcher Clade (Jake Gyllenhaal) and his family stumble into a breathtaking land deep beneath their hometown of Avalonia. But the storyline isn’t just about discovering new places and conquering distant lands. While the movie visually draws from pulp science fiction comics and films, as well as French and Belgian adventure comics, director Don Hall cites the work of Studio Ghibli writer-director Hayao Miyazaki as one of the central influences for the movie’s theme.

Miyazaki movies like Spirited Away and Princess Mononoke are particularly known for addressing the often destructive relationship people have with nature, but Hall was looking back to the beginning of Miyazaki’s career, too. “A lot of his earlier films had very strong environmental messages,” explains Hall.

Searcher and his family go on their adventure because they need to save their world’s energy source, a mysterious power-producing plant called pando. Searcher discovered pando 25 years ago, while on an expedition with his father, Jaeger (Dennis Quaid). Pando lets Avalonia’s citizens have their own technological innovations, from coffeemakers to personal flying airships. But recently, the pando’s power started to fizzle out.

The movie’s big plot twist, though, isn’t just about the true nature of this plant — it’s something that adds an extra allegorical layer to Strange World. Below, the directors explain the movie’s ultimate reveal, and what shaped it as part of the story.

For starters, the pando isn’t a power-generating plant — it’s actually a sort of parasitic infection that is slowly killing the Clades’ world, which turns out to be a gigantic creature floating in the middle of an endless ocean. Surprise! Avalonia is actually built on the creature’s back, and the “strange world” the Clades were exploring throughout the film is actually the creature’s insides, which explains the warm colors and organic blobs.

According to Hall and co-director Qui Nguyen, who also wrote the screenplay, this big plot twist was one of the first things they came up with for the movie.

“Day one — that was in the original pitch,” Hall tells Polygon. “It was just a question: Imagine you discovered that you’re living on the back of a living thing, and what you’re doing is harming that — what would you do? We built the story out from that.”

After that revelation, the Clades have to decide whether to save pando, which would kill the creature they live on, or destroy pando and save their world, while giving up the conveniences of their life and ultimately affecting the lives of everyone in Avalonia, without them having a say in the decision. While there’s some scuffle between the Clades and the rest of their expedition team about what to do, they eventually all agree they need to save the creature.

“[It] came down to the basic question that we actually wrestle with in the real world,” Nguyen says. “Two things that are always a battle are the conveniences of today versus the need for tomorrow. If we lost certain energy sources, it would make things harder, but ultimately might be better for the world and make the future last.”

Nguyen says, “We camouflaged it as the potential antagonist of the movie, but then ultimately went, Hey, this thing that brought you all these amazing things like airships — are you willing to give that up for the benefit of keeping your world alive, and ultimately giving a place for your kids to be able to have a future on?”

“It also helped that we gave Searcher the onus of discovering [pando],” adds Hall. “And then bringing it back to Avalonia and then farming it, so he’s got a very deep personal connection to pando. It made it personal for Searcher that he was giving up something that he brought to the world, even though now, it’s turned into something that’s not benefiting it.”

Of course, the way that environmental conflict plays out in the movie happens far more smoothly than it probably would in real life. The film’s epilogue, which takes place a year after the main events of the movie, shows the citizens of Avalonia more or less adjusted to their new way of life, without all the modern conveniences they once knew. It’s aspirational — and likely a happier ending than the Miyazaki version of the movie would have gotten, as well. But then again, what’s a Disney movie without a happy ending that prompts audiences to dream bigger and be kinder?

Strange World is out in theaters now.