Get Your Free GBP Forecast

Rishi Sunak’s deputy has requested an independent investigation into complaints about his conduct during his time as foreign minister and justice minister and now a third complaint has been lodged. The prime minister will be the one to deliver the judgement whether Dominic Raab breached the ministerial code and thus far no timeline has been provided for the verdict. This latest issue adds to the negative publicity suffered by the Tory government since Liz Truss’ government embarked on a journey of fiscal adventurism, proposing to cut taxes and increase public borrowing which sent UK financial assets into meltdown.

UK retailers are hoping that Black Friday shopping will boost spending ahead of the festive season during one of the worst cost of living crises the UK has seen in years. Research suggests that 8.7 billion pounds will be spent between the 25th and 28th of November, a rise of 0.8% year on year which, when adjusted for inflation, represents an uninspiring figure. Inflation remains at a 41 year high of 11.1%.

Major Risk events for the Week Ahead

Next week sees a distinct lack of UK specific data but there is plenty of high importance US data to get markets moving after the Thanksgiving weekend. On Wednesday we see the second estimate of Q3 GDP growth which is forecast to remain strong after a contraction in both Q1 and Q2. With the dollar driving major FX pairs like the pound, Fed Chair Jerome Powell is set to speak on Wednesday in his first speaking engagement since the November FOMC meeting. The jury is still out whether he will retain his hawkish ‘higher for longer’ messaging on inflation or whether he will side with the viewpoint of a, “substantial majority of participants judged that a slowing in the pace of increase would likely soon be appropriate”.

Thursday sees a very important inflation print, the PCE data print after the 10th of November CPI version revealed cooler than expected inflation for October which started the current USD selloff. A similar PCE print favors further USD weakness as it serves as stronger evidence that inflation may have peaked. A print above forecast could come to the aid of the dollar but upside potential certainly appears more limited as the US 10 year treasury yield has declined significantly from the peak.

Friday rounds off the week with US non-farm payroll data which is expected to show an increase in employment by 208k for November. The NFP data comes after a number of tech company layoffs and generally easing employment via the employment section of the US household survey. Unemployment has also eased slightly to 3.7%. 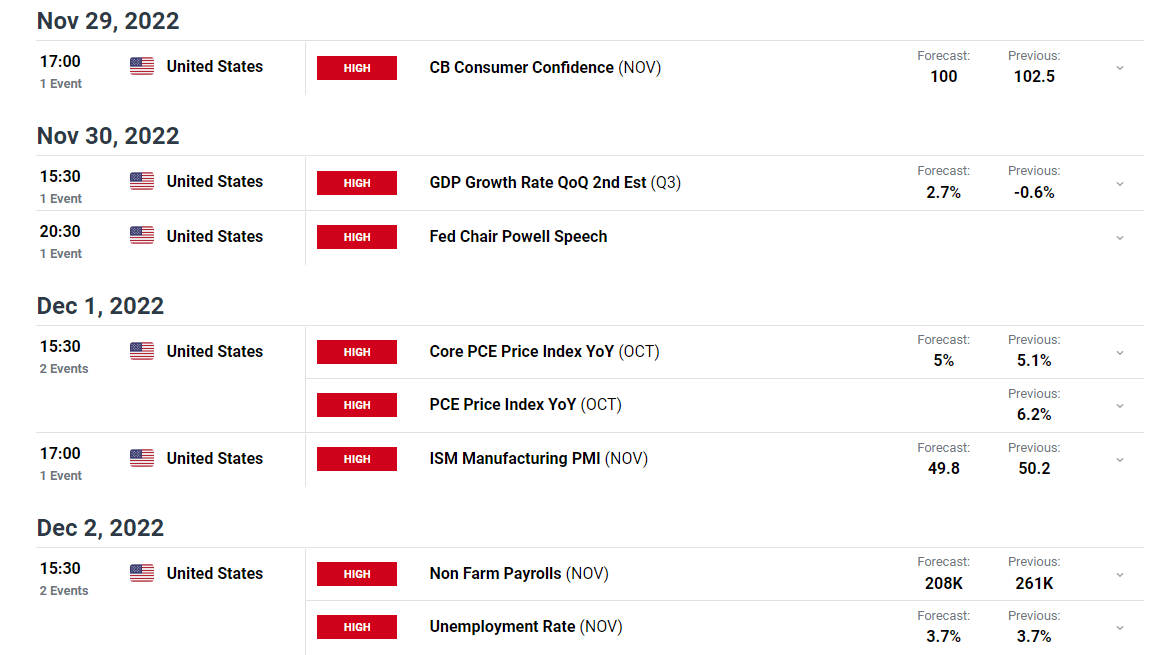