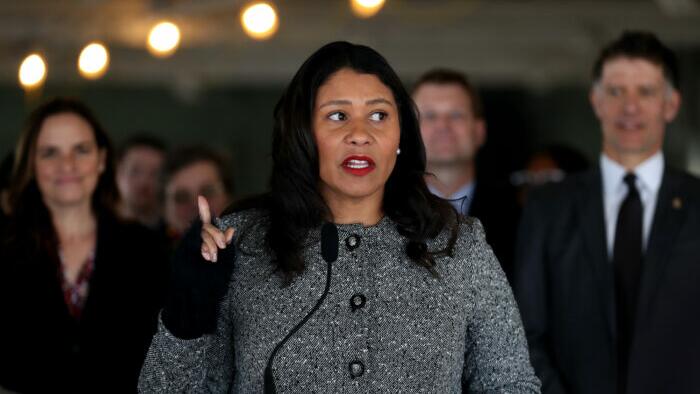 
Authored by Brad Jones via The Epoch Times (emphasis ours),

Guaranteed income programs for transgender residents in San Francisco and Palm Springs have raised the eyebrows of some critics, who say they are a misuse of public funds and discriminatory.

Erin Friday, a co-leader of Our Duty, a group that protests the gender transitioning of minor children and young adults, told The Epoch Times the programs could indirectly promote prostitution and other crimes by prioritizing transgender convicts and sex workers.

The city and county will provide $1,200 a month in guaranteed income for 18 months to 55 transgender residents at a cost of about $1.2 million.

“The program will prioritize enrollment of Transgender, Non-Binary, Gender Non-Conforming, and Intersex (TGI) people who are also Black, Indigenous, or People of Color (BIPOC), experiencing homelessness, living with disabilities and chronic illnesses, youth and elders, monolingual Spanish-speakers, and those who are legally vulnerable such as TGI people who are undocumented, engaging in survival sex trades, or are formerly incarcerated,” according to the GIFT website.

Friday, an attorney, said Our Duty is exploring legal challenges to the program, which she says is “both racist and discriminatory on the basis of sex and gender.”

With health insurance providers mandated to provide gender transition treatment to those who seek it, and nonprofit groups such as Planned Parenthood offering cross-sex hormones at a nominal fee, Friday said trans-identified people should not be entitled to more money than other impoverished segments of the population.

The poverty rate in California was estimated at approximately 12 percent in the fall of 2021, according to the Public Policy Institute of California, with 29 percent living near or below the poverty line. The poverty rate for seniors 65 and older was 16 percent, “markedly higher” than younger adults at 12 percent and children at 9 percent.

In addition, public funds should not be spent to promote “an ideology that supports cancer-and-sterility-causing experimental hormones on children and removal of healthy body parts,” Friday said.

She urged parents in other states to “be on the lookout” for similar policies being implemented in their cities, since others may also be planning similar pilot programs in the hopes of starting a nationwide movement, she said.

Greg Burt with the California Family Council, a religious organization based in Fresno, told The Epoch Times in a Nov. 18 statement the programs are discriminatory and counterproductive.

“It implies transgender poor are more valuable and deserving of help than those who are not,” he said.

Giving money to poor people who identify as transgender with no accountability or limitations on how the money is spent isn’t compassionate because it harms the people it seeks to help, he said.

“The policy is foolish because it will incentivize the poor to identify as transgender to get the $1,200. There is no medical test or visual identifier to know who is transgender,” he said.

Aside from the GIFT program, Breed has led two other guaranteed income pilot programs, including the Abundant Birth Project for pregnant women who are black or Pacific Islanders, and a $6 million universal basic income program for local artists affected by the COVID-19 pandemic.

The initiatives are part of the California Guaranteed Income Pilot Program, which plans to provide grants totaling $35 million for pilot programs across the state. Each program must be funded with at least a 50 percent match by local governments or organizations.

According to the City of Palm Springs, it’s also part of a broader plan by Mayors for Guaranteed Income, an organization founded by former Stockton Mayor Michael Tubbs in 2020 that now has more than 80 supportive mayors in at least 29 different states. The group includes 23 mayors in California, including San Francisco’s Breed and Palm Springs’ former Mayor Christy Holstege.

“Between the pilots that have already started disbursements and those that are in the works, our coalition will provide more than $200 million in direct, unconditional relief to everyday Americans,” the organization states on its website.

The Palm Springs City Council voted unanimously in March to set up a guaranteed income program that would pay transgender and non-binary residents up to $900 a month. The council allocated $200,000 to two organizations, DAP Health and Queer Works, to develop the guaranteed income plan and apply for a share of the state funding.

Mayor Lisa Middleton, who is openly transgender, voted to support the program at a March city council meeting but expressed doubts about whether the city should fund it or not.

“For the record, I strongly support reform of our poverty programs,” Middleton said. “I do not believe that guaranteed income programs as they are currently envisioned will be able to succeed and scale up to the level of the problem that they are attempting to address, nor do I believe that placing income maintenance programs within municipal government broadly is an appropriate public policy step. Notwithstanding that statement, I’m prepared to vote for the $200,000.”

However, Jacob Rostovsky the founder and CEO of Queer Works, indicated the city is expected to provide an additional $1 million to $1.2 million, according to a city staff report. The anticipated state grant and financial support from donors will cover 40 to 50 percent of the $2 million project.

Randy Economy, a Republican who resides in Coachella Valley, told The Epoch Times the mayor and council of Palm Springs have taken the city from “LGBTQ friendly” to a “much more radical place.”

In 2017, Palm Springs became the first city in the nation with an all-LGBT city council.

“Using the transgenderism situation as a political social experiment city by city is absolutely nonsensical and dangerous,” Economy said.

An openly gay man “who happens to be a Republican in California,” Economy said he left the Democratic Party about 20 years ago because of its “bizarre obsession with sexuality and gender.”

“What we’ve seen in cities with predominant majorities from one persuasion or the other, whether it be racially dominant … or in this case, dominated [by] … the LGBTQ community, just because they got elected, they feel they’ve been given a green light to be able to go ahead and promote their agenda, their will, their entire philosophy—on the entire community that they represent,” he said.

Economy played a lead role in the recall effort against California Gov. Gavin Newsom, and he ran unsuccessfully in the June 7 primary election for the District 4 seat on the California State Board of Equalization.

He also opposes subjecting children to gender identity issues inside or outside of the classroom.

“It has gotten to the point where it’s socially acceptable and routine to take a 5-year-old or a 7-year-old and [allow] them to start [gender] transitioning,” he said. “To me, that’s reprehensible. It’s cruelty to the children to put them through such a horrendous situation until their minds mature and develop. I understand the issue because I’ve seen it happen, and kids need to be kids.”

The Drag Laureate program will support a drag performer to promote the city’s “LGBTQ+, arts, nightlife and entertainment communities,” according to the release.

California state Sen. Scott Wiener (D-San Francisco) sponsored the program in his prior elected office as a county supervisor.

“San Francisco’s Drag Laureate program is a wonderful celebration of our drag queens,” Wiener said in the release. “Drag performers are an amazing representation of the LGBTQ community and they contribute so much to our city. I’m thrilled about the launch of this program, and excited to see who is crowned Drag Laureate.”

British feminist Kellie-Jay Keene recently staged a protest against Wiener’s promotion of drag queens at a pumpkin carving contest for families in San Francisco that Mayor Breed attended. Keene, who opposes the transgender movement, was in the city as part of her Let Women Speak U.S. tour.

Wiener is the author of several controversial legislative bills supporting the transgender community and “gender-affirming care.” One of his bills, Senate Bill 107, will shelter parents of trans-identified youth who seek to avoid prosecution for child abuse in other states, making California a trans sanctuary state. Democrat California Gov. Gavin Newsom signed the partisan bill into law in September despite widespread opposition and no support from Republicans in the legislature.

The Williams Institute at the University of California–Los Angeles studied data from the U.S. Centers for Disease Control and Prevention and found about 42.7 percent of people in the U.S. who identify as transgender and nonbinary are teenagers or young adults, according to a report released in June 2022.

Youth ages 3 to 17 currently comprise about 18 percent of the transgender-identified population, up from 10 percent in previous estimates.

More than 1.6 million adults (18 years and older) and youth (ages 13 to 17) identify as transgender in the United States, or 0.6 percent of those ages 13 and older, the institute reports.

Stress-relieving gifts for people who need to chill out