The izzo Oral Care Kit(opens in a new tab) is a sleek electric toothbrush kit that makes you feel like your own dentist. It includes an ergonomic motor body that has three different speeds: ultra, daily, or gentle. It comes with not only an oscillating toothbrush head, but also a polishing head attachment, as well as polishing paste. You know the thing they do after they brush your teeth at the dentist? Yeah, that. It also includes a scaler (the godawful scraping tool) and a UV-C sanitizing case for the head attachments. It obviously comes with the charging base and cables as well, and the whole kit costs $129.99.

I used the quip electric toothbrush(opens in a new tab) for a few years, which is only $40, but it crapped out on me a while ago, so I had been using it like a normal toothbrush. I was very excited to test izzo and get back in the electric toothbrush game. My attention issues require that I have a toothbrush that tells me how long to brush for (which both quip and izzo do). It’s a game changer. Also, it’s been very appealing having all of the dental tools at my disposal for the past few weeks. I’ve thought, now I’m never going to schedule that dentist appointment.

The best part is unboxing

The izzo kit comes in one of those “slide out of the sleeve” boxes, which always feel a little luxurious. The instructions said to plug in the charging base, and allow the motor to charge for 12 hours, which is too many hours. Luckily, it didn’t need to charge for that long at all and worked perfectly fine after a few hours. It seems like as long as you put the motor back on the charging base between uses, it won’t ever run out of charge. The charging base has spots for both the polishing head and scaler to sit while you’re not using them, so you don’t have to put them back in the box or anything like that.

The UV-C sanitizing case comes with its own charging cable, and is supposed to stay charged for two weeks after two hours of charging. I have only charged it twice and it has yet to die on me.

The izzo toothbrush head is a small, round brush that oscillates. These types of toothbrush heads are found on a lot of popular electric toothbrushes, such as Oral-B toothbrushes. When I first turned the toothbrush on, it automatically started on the “ultra” setting, which made my entire skull vibrate. Then, I had to click the button on the motor to switch to the “daily” setting. I have pretty sensitive gums, so even the “daily” setting was a bit too much for me because my gums were bleeding a bit. I know, gross. So, I clicked the button once again to switch to the “gentle” setting. Much better.

When brushing, the motor will automatically stay on for two minutes, which is the recommended amount of time by the ADA. Every 30 seconds, the vibration of the motor will “pulse,” signaling that it’s time to move to a new quadrant of your mouth. This way you spend an equal amount of time in each quadrant. It was more of a quick pause in the vibration than a pulse, and I didn’t feel it the first time I used it. After a few brushes, I got accustomed to the pulse and didn’t miss it. My favorite aspect of electric toothbrushes is the timer, because there is no way I would be brushing my teeth for a full two minutes without it. 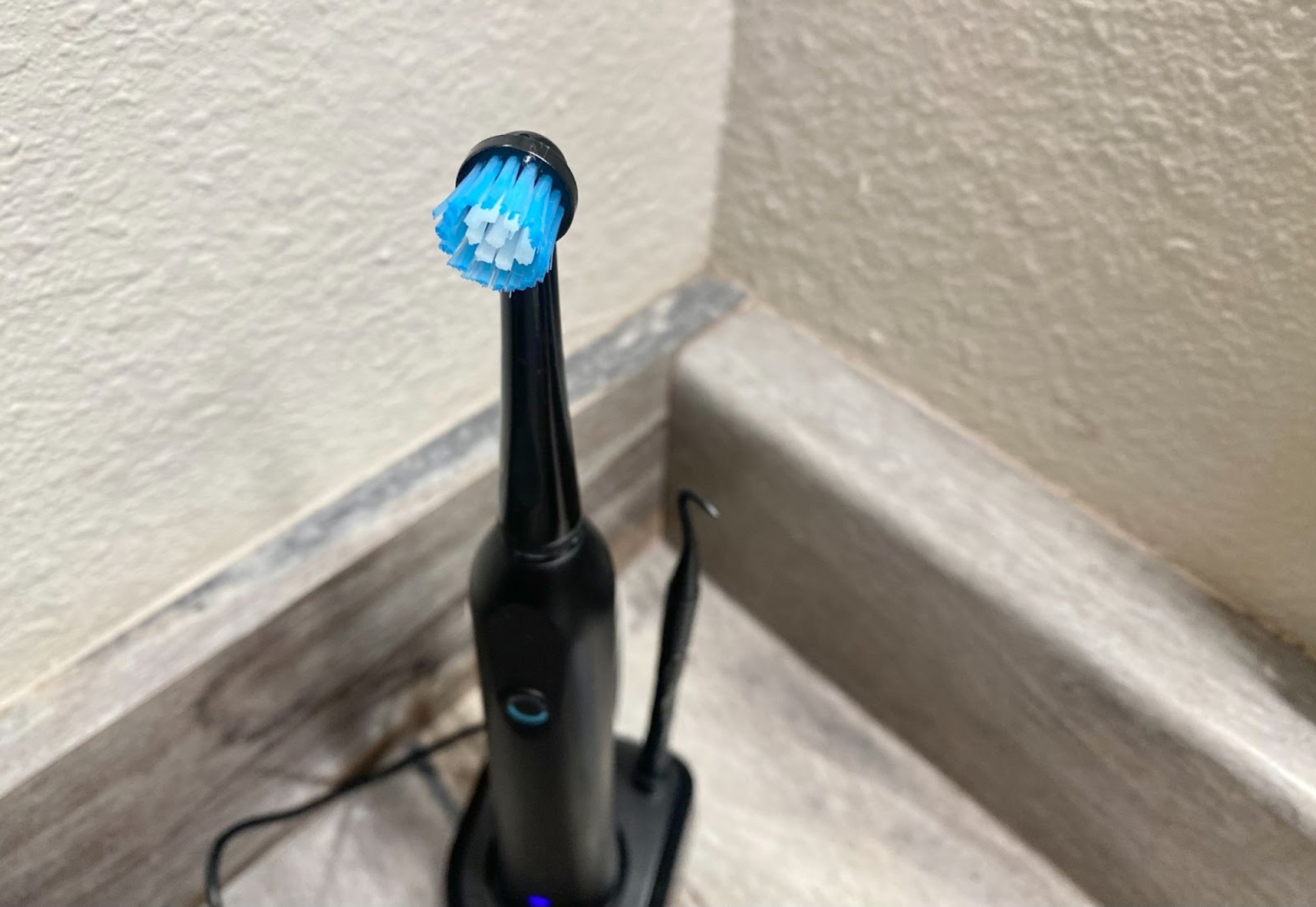 One of the first things I noticed about the toothbrush was that it didn’t have any tools for scraping your tongue, which is something I do religiously as part of my brushing routine. My quip toothbrush had the raised dots on the back of the brush head, and a lot of manual toothbrushes have something similar. The izzo, however, doesn’t have anything like that. I don’t think the brush head or polishing head would be able to clean my tongue. Then, I thought, the dentist doesn’t clean tongues. Is it necessary? Does the tongue clean itself? Regardless of the true answer, I am a tongue scraper and wish the izzo had some mechanism to help facilitate that — or at least a separate tongue-scraping tool. (Many experts do recommend brushing your tongue, FWIW.)

It was a sensory issue for me

Let’s talk about the scaler. It’s made of dental grade polymer that is designed to get the plaque between your gums and scrape your teeth, but not scratch them. I’m so sorry to report that I just could not use it! I’ve never had a problem when the dentist uses this tool on my teeth during cleanings. I’m not sure if it was because I was watching the scraping or facilitating it, but it felt like nails on a chalkboard. Worse than nails on a chalkboard. It sent shivers down my spine. I am really upset that it isn’t something I can use, but I’m sure this won’t be a problem for everyone. If you have sensory issues like me, you could have difficulties. 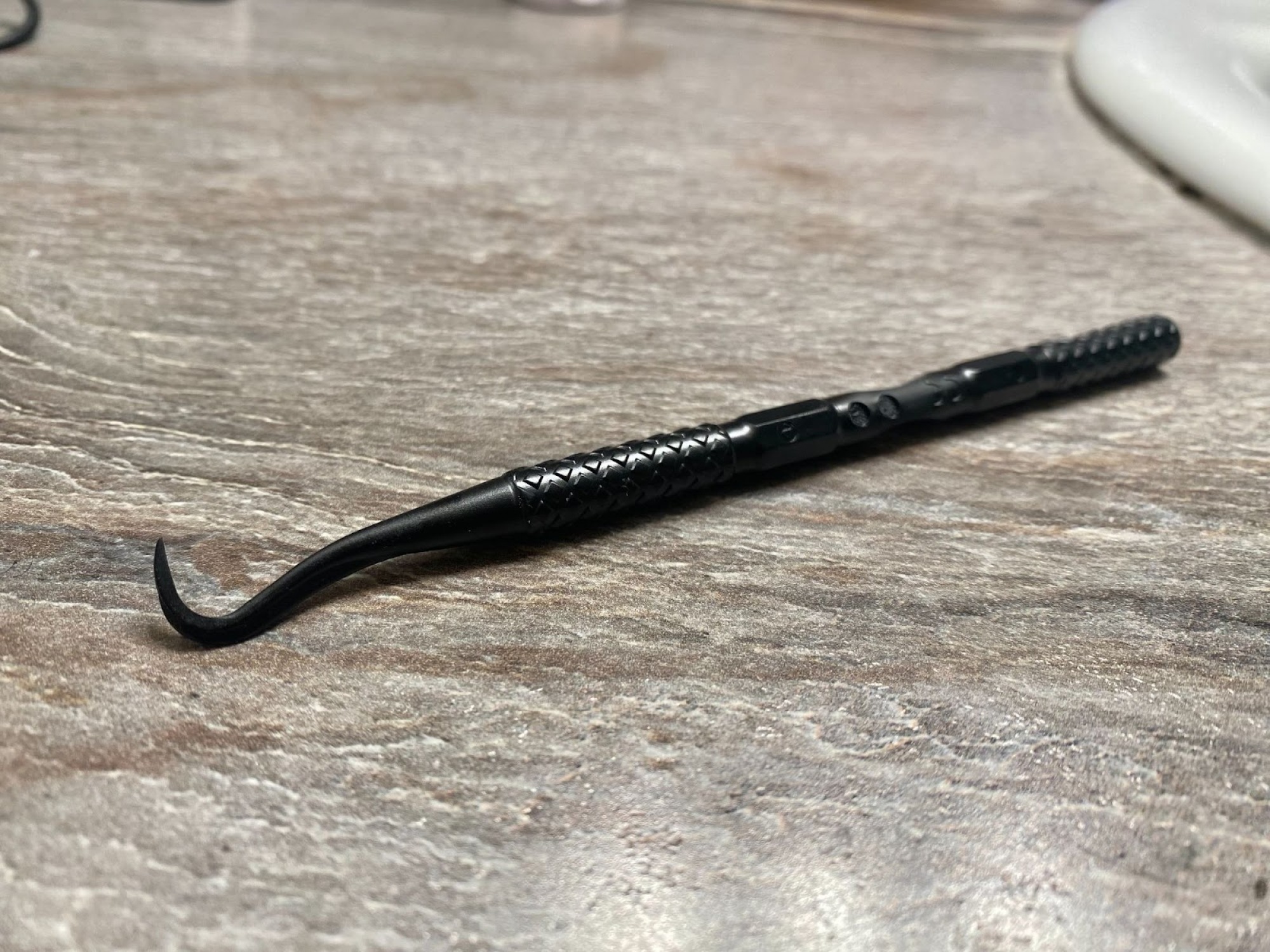 The scaler lets you scrape gunk out of your teeth, but might cause some sensory issues if you’re like me.
Credit: Mallory Minich / Mashable

The tech specs are dental grade

I tried to do some research to see what the tech of the izzo toothbrush kit is like compared to other toothbrushes. There is a page on its website listing all of the technical aspects of the toothbrush kit, such as the relative dental abrasion (RDA) of the enamel polishing paste when used with the polishing head. The RDA measures the abrasiveness of the paste on tooth enamel. The RDA score for the izzo paste is 72, which is considered to be on the low end of the midrange abrasion category. Comparatively, Crest Pro Health has an RDA of 155, which is in the “likely harmful” category. The higher the number, the more damage you could be doing to your enamel. 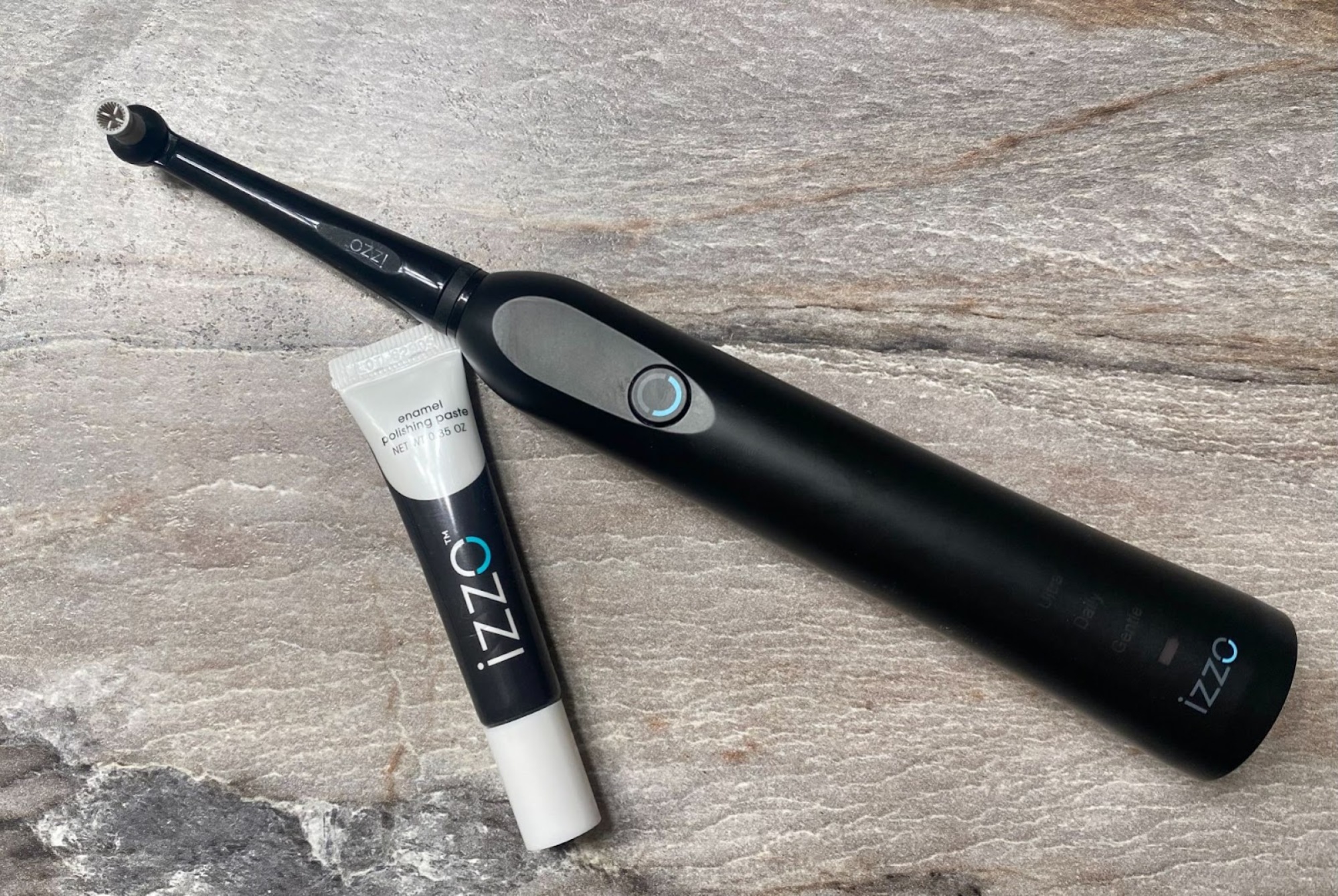 The polishing attachment really rounds out the whole “at the dentist” feel of the izzo kit.
Credit: Mallory Minich / Mashable

The low RDA for izzo only pertains to its polishing paste. I used the polishing paste once a week for a few weeks and didn’t notice a huge difference in the whiteness or smoothness of my teeth. That was only after two or three weeks though, so maybe it just takes some more uses to really see a difference. I wish that izzo made its own toothpaste as well, since the company seems to be doing its research. I always added the toothpaste in my quip subscription, so I didn’t have to worry about it. Maybe that would be something that izzo could add to the kit in the future, because it’s the only thing missing as far as I can tell. I couldn’t even find any toothpaste recommendations on the website.

The ADA recommends that you change your toothbrush every three to four months to prevent bacteria from building up in the bristles. The izzo comes with the UV-C sanitizing case, so shouldn’t that make the brush head last longer? I would hope so. I understand that there may be some worn out bristles after using the brush for a while, but I would think that the point of the sanitizing case would be to prevent bacteria buildup so that the brush head can last longer. izzo still recommends to change the brush head every three months, so we’re assuming the UV sanitation is meant to just keep the brush head a little fresher during its three-month lifespan. 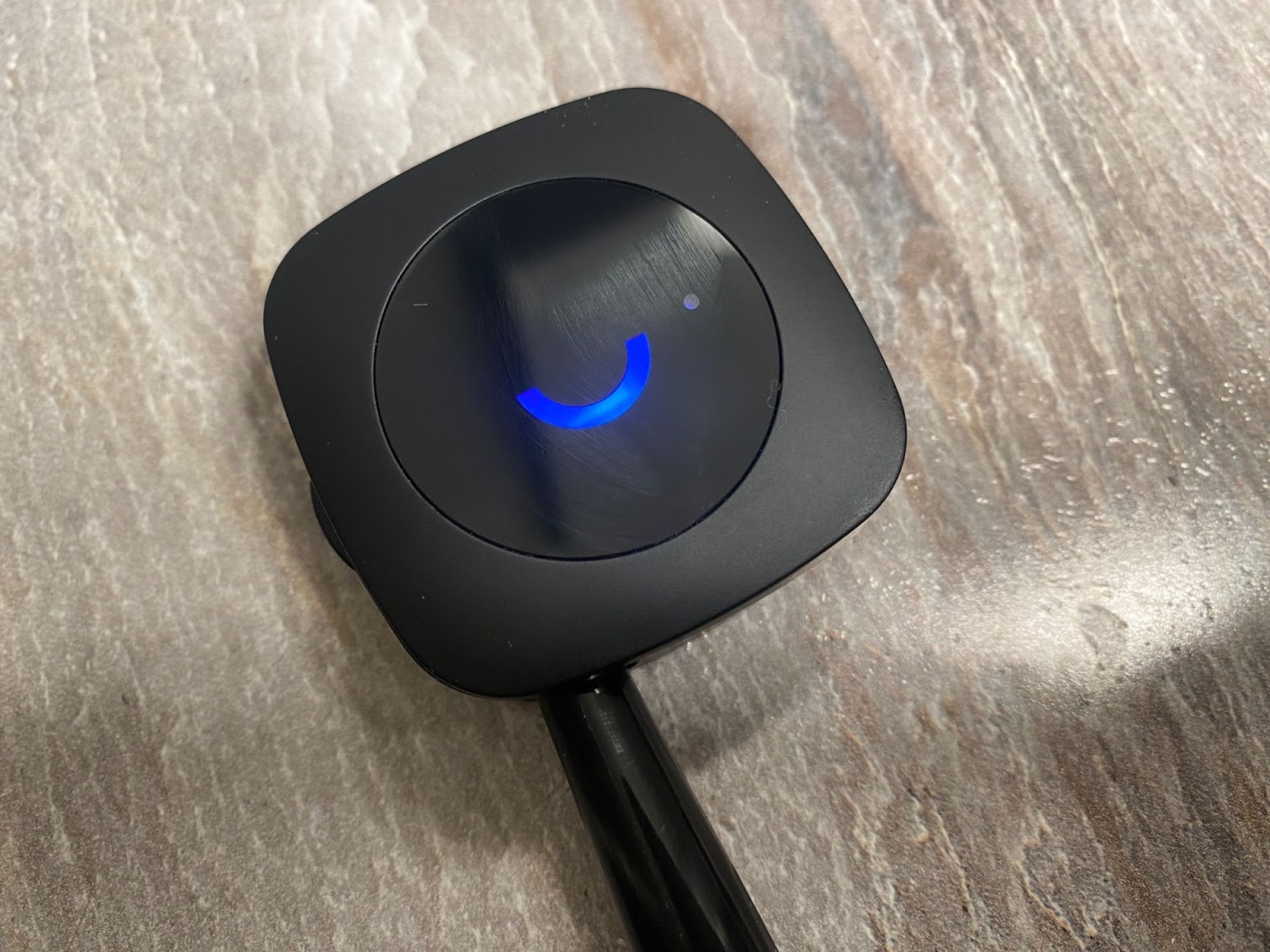 Is the izzo electric toothbrush kit worth it?

In all honesty, the izzo Oral Care toothbrush kit(opens in a new tab) wasn’t worth it for me. There are plenty of other electric toothbrushes on the market with an oscillating brush head that cost way less. You are paying more for the polishing head and scraper to be included.

I couldn’t really find any other electric toothbrushes that also come with polishing head attachments, but there were separate polishing tools sold on Amazon for only $25, though I haven’t tested those to see how they compare to the izzo. There are also scraper tools on Amazon that only cost $6, though they aren’t made of the same polymer material. If those extra tools are really important to you, it might be worth looking at izzo. As of publishing, the izzo does not have the ADA Seal of Acceptance. The kit definitely has the look and feel of dental equipment, which is what makes it enticing to consumers, but I don’t know if the performance backs up the price.