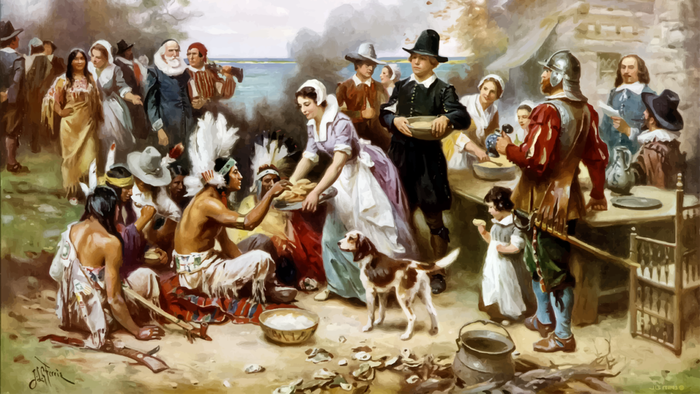 
Authored by Michael Maharrey via SchiffGold.com,

When I was a kid, we used to say some things only “sound good on paper.” In other words, they seem like good plans, but there is no way they’re going to work in the real world.

That’s socialism in a nutshell.

The Pilgrims found this out the hard way during their first couple of years in North America. Their experiment in socialism turned out deadly.

Turns out, you can’t just ignore economics and human nature.

It sounds so nice. And we all want to be nice, right? People are emotionally drawn to socialism because it sounds so good. It sounds fair. It sounds — nice.

But do you know what’s not nice?

That’s exactly what happened the Pilgrims got when they took a stab at socialism.

Most Americans don’t know that the Plymouth colony was originally an experiment in socialist utopianism and were it not for a complete 180 a couple of years in, we probably wouldn’t have enjoyed the bountiful feasts most of us will indulge in today. There would have been no Thanksgiving because there would have been nobody left to give thanks.

When the Pilgrims arrived in Massachusetts on November 11, 1620, they placed all their food and provisions in a “common store.” These folks were forward thinkers. They didn’t even have Marx’s scribblings to appeal to. They set things up on the socialist principle of, “From each according to his ability, to each according to his need.”

Things got off to a bad start in the new world. Conditions were miserable, as William Bradford described them.

That which was most sad and lamentable was, that in two or three months time half of their company died, especially in January and February, being the depth of winter, and wanting houses and other comforts; being infected with the scurvy and other diseases, so as there died sometimes two or three of a day, in the aforesaid time; that of 100 and odd persons, scarce 50 remained.”

Now, the Pilgrim’s initial struggles didn’t really have anything to do with socialism. They just had the misfortune of landing in Massachusetts at the onset of winter. If you live in New England, you understand their pain.

But even after their first summer, things didn’t improve much. The following fall, the Pilgrims harvested their first crops and again, they all went into the common store.

Now, wasn’t that nice? No greed. Nobody getting any more than they should. Of course, nobody was getting much of anything at all – but still – they had to feel good about themselves, right? Because, after all, the system was fair.

So, in November the ship Fortune arrived with more than 30 new settlers, mostly young men. More manpower was welcome, but according to accounts, they brought “not so much as a bisket-cake” with them. Now they had a meager supply of food in the common store and even more mouths to feed. The future looked bleak as food supplies ran out and the “planned socialist” community faced starvation yet again.

The following year, the harvest was poor in spite of the added manpower. Nevertheless, the pilgrims again put the meager harvest in the common store. Because, you know, it’s going to work this time!

That winter, they starved.

The colonists were learning economics the hard way.

Richard Grant in his book The Incredible Bread Machine wrote:

“For two years the Pilgrims faithfully practiced communal ownership of the means of production. And for two years nearly starved to death, rationed at times to “but a quarter of a pound of bread a day to each person.” Governor Bradford wrote that “famine must still ensue the next year also if not some way prevented.” He described how the colonists finally decided to introduce private property:

[The colonists] began to think how they might raise as much corn as they could, and obtain a better crop than they had done, that they might not still thus languish in misery. [In 1623] after much debate of things, the Gov. (with the advice of the chiefest amongst them) gave way that they should set down every man for his own … and to trust themselves … so assigned to every family a parcel of land. This had very good success; for it made all hands very industrious, so as much more corn was planted than otherwise would have been by any means the Gov. or any other could use, … and gave far better content. The women now went willingly into the field, and took their little-ones with them to set corn, which before would allege weakness, and inability; whom to have compelled would have been thought great tyranny and oppression.”

Reflecting on the experience of the previous two years, Bradford goes on to describe the folly of communal ownership:

“The experience that was had in this common course and condition, tried sundry years, and that amongst godly and sober men, may well evince the vanity of that conceit of Platosand other ancients, applauded by some of later times; — that the taking away of property, and bringing in community into a common wealth would make them happy and flourishing; as if they were wiser than God. For this community (so far as it was) was found to breed much confusion and discontent, and retard much employment that would have been to their benefit and comfort. For the young-men that were most able and fit for labor and service did repine that they should spend their time and strength to work for other men’s wives and children, without any recompense. The strong, or man of parts, had no more indivision of victuals and cloths, than he that was weak and not able to do a quarter the other could; this was thought injustice…”

Woah! Some people resented doing all the work? They didn’t work as hard when they knew they weren’t going to directly benefit?

Actually, it’s not shocking at all. It’s human nature. And we all know it.

Now, we can lament the fact. We can say it shouldn’t be that way. We can finger-point and talk about greed. We can get all holier-than-thou and say we wouldn’t act that way (in other words lie). But people will still be people.

Here’s a harsh truth: good intentions and feel-good policies can’t trump basic economics. You can dream of unicorns and lollipops all day, but it won’t change reality.