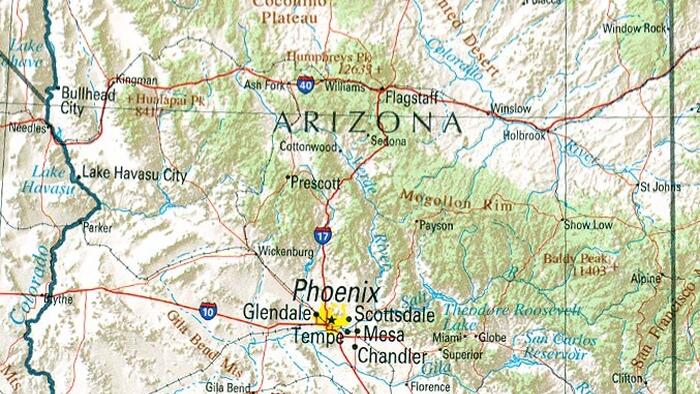 It is a busy week for Kari Lake and for Republicans who harbor White House ambitions. Several are more than eager to share the stump with the Arizona gubernatorial candidate, a fact that Democrats believe underscores their arguments about the “ultra MAGA” right and the rise of GOP extremism.

Tuesday morning in Scottsdale, South Dakota Gov. Kristi Noem will have coffee with Lake and her supporters. The next afternoon in the Phoenix suburbs, Lake will share the stage with Texas Sen. Ted Cruz. Former President Donald Trump arrives Sunday to host a rally in the town of Prescott Valley.

Some have already stumped for Lake, such as Florida Gov. Ron DeSantis in August. Others have promised they will, like Virginia Gov. Glenn Youngkin, but haven’t yet put a date on the calendar.

“Why is it a surprise that Republicans are helping Republicans?” a Noem spokesman asked RealClearPolitics before getting a plug in for the candidate: “South Dakota is proving that freedom gets results, and Kari Lake will bring the same principles to Arizona.”

But Lake isn’t a generic Republican candidate. A longtime former Phoenix television anchorwoman who routinely excoriates her former profession, she has called for the 2020 presidential election to be decertified, condemned the vaccine mandates as government overreach, and aggressively mixed it up with regional and national reporters alike. In short, Lake is a Republican after Trump’s heart. Other politicians, despite the criticism, want in.

The race between Lake and Democratic nominee Katie Hobbs remains a tossup. In a state Biden narrowly won, the RealClearPolitics Average has the Republican out front with a slim 2.2-point lead., so it would be on the national radar anyway. But Lake, who brings an undeniable energy to the stump, adds a heightened level of controversy to the mix.

“Kari Lake is as extreme as they come – from touting Arizona’s 1901 abortion ban with no exceptions for rape or incest to endorsing Donald Trump’s Big Lie that incited an attack on our Capitol,” DNC spokesperson Ammar Moussa told RCP. “It’s no surprise that national Republicans are flocking to Arizona to embrace Lake and echo her ultra-MAGA agenda because this is exactly what the Republican Party stands for today.”

Democrats and President Biden are eager to make the midterms a referendum on what they see as GOP extremism, rather than the economy or inflation where the White House remains underwater in polling. And while Biden and his aides haven’t singled out Lake, they have happily pointed to abortion restrictions, in particular a national ban proposed by Sen. Lindsey Graham and backed by former Vice President Mike Pence, as examples of the rightward shift of the Republican Party.

“If you are not with where the majority of Americans are, that is extreme,” White House press secretary Karine Jean-Pierre told RCP last month. “That is an extreme way of thinking.”

Lake has repeatedly denied the 2020 election, calling for the outcome of that contest to be decertified more than a year later. Traditional conservatives point to those statements while urging 2024 contenders to stay away from Arizona. Henry Olson, a conservative columnist at the Washington Post, wrote this summer that “nothing defines Lake more than her embrace of election denial” and begged Arizona Republicans not to nominate her. After she won that nomination and Virginia’s governor announced plans travel to the state, a National Review op-ed warned Youngkin to “hew closely to the lane he has staked out for himself” because “Trump sycophants are clogging up the rest of the road.”

Yet, the enthusiasm for Lake is undeniable in the GOP grassroots where her belligerence toward the media is not seen as a drawback. Lake has said that if elected she would enforce Arizona’s bygone abortion ban, a law on the books before Roe v. Wade was passed a half-century ago. It prohibited abortions and criminalized abortionists. When pressed on her position, Lake said she supports “saving as many lives as possible” and then turned the question back on the reporter.

“What I really want to know, and I’ve been waiting, I tune into you guys all the time, I want to know where Katie Hobbs stands. I never hear you guys ask her that,” Lake said.

“Let me tell you where she stands. She supports abortion right up until birth and after birth. She supports that if a baby survives a botched abortion that that baby die on a cold metal tray. And none of you ever try to get her to talk about her stance,” the candidate continued.

A clip of the exchange went viral. Cruz shared the video on Twitter and said Monday “This is how it’s done.”

It is an open question whether that kind of rhetoric does more to get Arizona voters to the polls or animate the online conservatives. For now, regardless of controversy, potential presidential contenders are eager to associate with Lake who is becoming a rising star on the right.

“Kari Lake does as much to help Ted Cruz, Kristi Noem, or Glen Youngkin in Arizona as they do to help her,” said Barrett Marson, an Arizona GOP strategist. “It’s mutually beneficial for some of these candidates to come here and stand next to Lake. Whether they add to her vote total, it may not matter, they are still associating themselves with a very popular Republican candidate.”