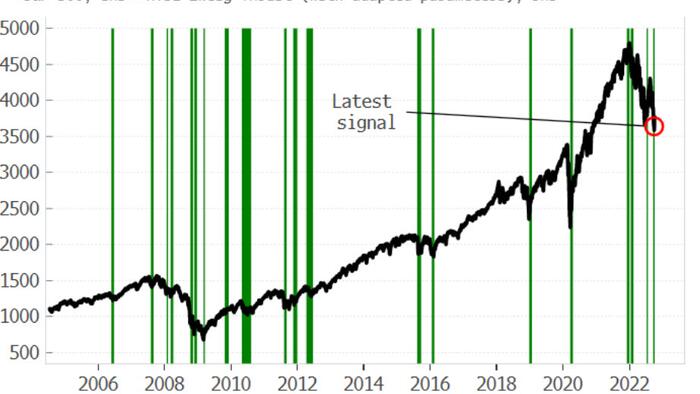 There has been a surge in the number of advancing NYSE stocks which is typically a very reliable sign of further positive equity returns in the coming weeks.

The bounce off the recent lows in stocks has been impressive. Negative sentiment and short positioning found the spark they needed in the sharp fall in the JOLTS job openings survey on Tuesday. As one wag on Twitter put it, firms finally figured out that all they needed to do to force the Fed to pivot was offer fewer jobs.

Dear Corporations, if you want your stock prices to ever go back up again you need to fire 10% of your employees, by mandate of the Powell-Biden administration.

Thank you for your cooperation.

There are myriad headwinds remaining for equities. Leading indicators expect earnings to continue to fall. Global financial conditions remain very tight, and excess liquidity is still very low. Customers have also been drawing down from their stock-margin accounts at a rate that has been lower only in the 2001 and 2008 recessions, also keeping pressure on equities.

But bear-market rallies are rarely about fundamentals (to begin with at least). They are responses to very oversold conditions, the resolution of which is an often-sharp upward move in price.

One way of measuring the magnitude of the bounce off the lows is with a Thrust Signal. It is one of the most reliable buy signals, and one apparently favored by Paul Tudor Jones.

It triggers whenever the net number of stocks rising on the NYSE very quickly goes from being very weak to very strong. Often when you get such a “thrust,” there is a follow-through move over the next weeks or months.

After last triggering on July 21st, the signal has just triggered again. The July signal was not as good as many of the previous signals, but it still preceded a 10% rally in the S&P before the market reversed at the 200-day moving average.

Historically the signal has shown strong outperformance versus the sample average using data going back to 2004 (excluding the July 2022 signal which is still “in play”).

There are plenty of reasons – from earnings to liquidity to a strong dollar – to distrust a move higher in equities. Despite this though, the thrust signal is telling us the current set-up is an excellent risk-reward opportunity for a potent bear-market rally.