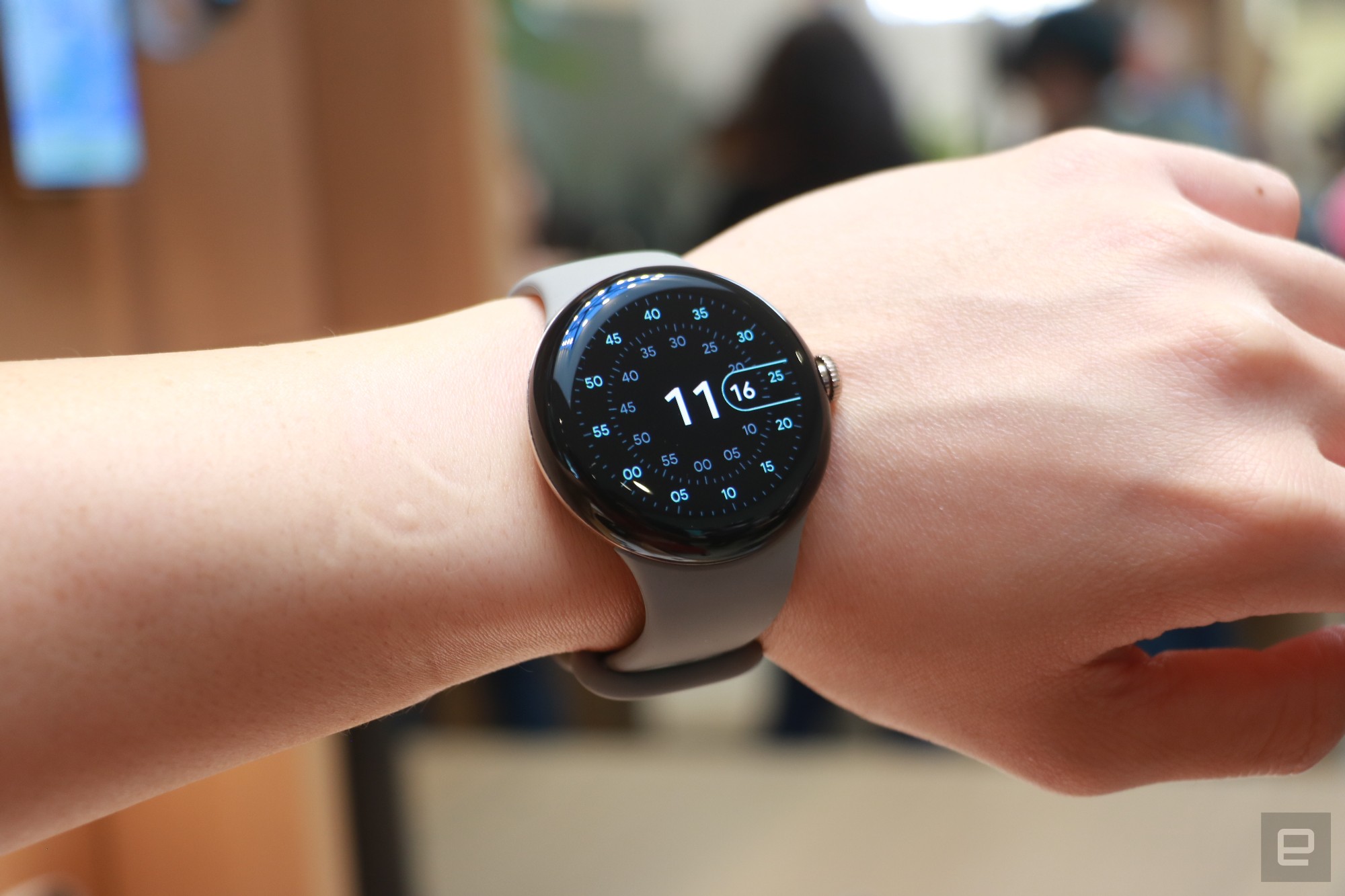 
We’ve been waiting years and years for the Pixel Watch to finally be real. Because it’s taken so long for Google to show us its own smartwatch, expectations are high for the company to deliver something impressive. We were able to get a preview of the Pixel Watch ahead of its full launch at the Made By Google event in Brooklyn today, and honestly I’m very taken by its design.

The device is only available in one size: 41mm, though there are various band options. It’s fairly dainty, at about the same size as the small Apple Watch, but even on wrists larger than mine it didn’t look comically tiny. More importantly, its design is clean and attractive. The case without its strap feels like a polished pebble and I flipped it over and over in my hand, all while caressing its smooth edges and curves. I didn’t attempt to scratch or break the screen during my time with it, but the fact that it’s covered in a custom “3D Corning Gorilla Glass 5” gives me some assurance that it’ll survive a fall.

The case on its own has no lugs. To attach straps, you’ll have to twist attachments into grooves on the side like you’re screwing a lens onto a DSLR’s body. You’ll have to find the spot where they line up, push the head of the band slightly into the slot, then slide it in horizontally. It takes a bit of learning, but once you get it the action is easy to master.

Because it doesn’t have lugs, the Pixel Watch offers plenty of variation in design and can also fit more snugly on your wrist. The stainless steel case is available in matte black, polished silver and champagne gold, and the last one is my favorite. Loads of straps are available too, from the typical rubbery sports bands to those made from leather, metal mesh and links. Some of these come with lugs, so you can add a classic touch back to the timepiece.

Google’s stretch/woven band is pretty low profile, and wearing it is like gluing a pebble onto a rubber band and pulling it over your wrist, except elegant. I liked this combination — not only was it easy to wear, it was also light enough that I imagine it would be comfortable to wear to bed.

That’s important because Google has built in sleep-tracking features to the Pixel Watch, which runs what the company calls Wear OS 3.5. It’s a variation of the software that it co-engineered with Samsung last year, with some tweaks that incorporate Fitbit’s health and fitness tracking tools. You’ll get background heart rate monitoring at a rate of once every second, auto workout detection and more, thanks to the onboard blood oxygen sensor and a “multipurpose electrical sensor.”

But that’s not all that’s different about Wear OS 3.5. Google has made some new watch faces — 18 families altogether — that allow for different views and customizable complications. You can add things like your steps progress, the weather and more. Features you’d expect, like GPS, LTE, Google Pay and third-party app support are all available. There’s also an Always On Display, and in spite of this and the higher rate of pulse reading, Google says the Pixel Watch’s 294 mAh battery should last 24 hours, thanks to a dedicated low-power co-processor for these types of tasks. When you run out of juice, the Pixel Watch should get up to 50 percent charged in 30 minutes, using Google’s USB-C magnetic cable.

For more intensive actions, the Watch taps its Exynos 9110 processor, and with 32GB of storage onboard, there’s plenty of room for apps or saving music for offline playback.

From my brief time with the Pixel Watch so far, the new Wear OS feels very similar to Apple’s watchOS. That’s not a bad thing — Android users have long lacked a smartwatch that’s comparable to the Apple Watch. Though Google’s Watch works best with Pixel phones, it’s also compatible with phones running Android 8 or newer.

So far, the Pixel Watch is one of the most beautiful smartwatches I’ve seen, and I’ve seen many. Though some Fossil wearables look nicer, I’m excited by what Google is offering with the new Wear OS and Fitbit app. We’ll need to spend more time with it in the real world for me to know if it’s a decent Apple Watch competitor, but for now, color me intrigued.

Follow all of the news from Google’s Pixel 7 event right here!