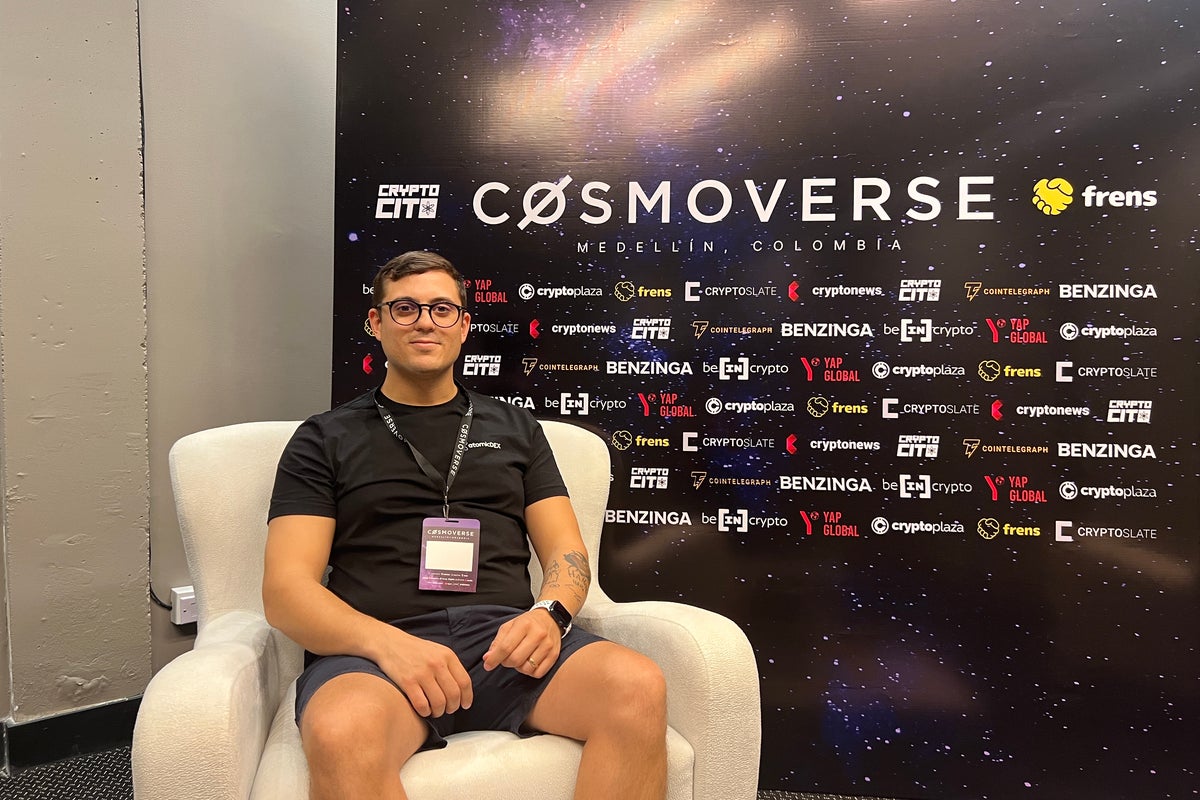 Hosted in Colombia last month, Cosmoverse 2022 curated thought leaders within the still nascent industry of blockchain interoperability. Among these speakers was industry veteran Kadan Stadelmann, who helped build Komodo, a technology that aims to facilitate a cross-chain future for blockchain networks.

Blockchain users can’t trade bitcoin for dogecoin out of the box, as these cryptocurrencies live on distinct blockchains. Cross-chain bridges exist to transfer assets between chains, but these protocols lack necessary security for mainstream adoption. Komodo offers a different solution, delineated below.

Firstly, Benzinga asked Stadelmann about the Cosmos software-development kit, as the leading Cosmos exchange AtomicDEX is now integrated with Komodo.

BZ: What types of customizations does the Cosmos SDK offer that other blockchains can’t provide?

“I think in general the Cosmos SDK offers a basis to create independent blockchains with such a degree of customization opportunities, without needing to reinvent the wheel or get ultra deep in the smart contract coding stack. This is one huge difference other chains don’t have. On Ethereum, you can set up a custom token, but with the Cosmos ecosystem you have an extreme degree of customization opportunities across the network. For example, transaction fees for apps built on Cosmos can be paid in the application’s token, whereas all transactions on Ethereum are in Ether.” – Stadelmann

BZ: Do you have any lofty goals for Atomic Swaps other than in DeFi?

“I think one big sector is data exchange. At the end of the day, when we swap coins we’re swapping data. It could be an open market for knowledge transfers, such as scientific reports we exchange. Anything that has value and a digital representation could be swapped on AtomicDEX in the future.” – Stadelmann

BZ: What parts of the user experience are streamlined by having a wallet and decentralized exchange (DEX) integrated in one application?

“Technically, they are still two different things because they utilize two different APIs, but live within one product. If you look at the crypto wallet and the DEX on its own, what do people end up doing with them? They need to send funds from the wallet to the dex, then back to the wallet, using two different wallets from two different providers. We figured it makes sense for it to be served from one application. In fact, we figured that the user interfaces compliment each other. That’s one of the key factors that made us realize it’s time to unite these products.” – Stadelmann

Multiple wallets are sometimes necessary when using different blockchains––it’s not an easy task to trade crypto between chains. Since AtomicDEX is multichain, it made sense for it to create a one-stop-shop for users to transact cross chain.

BZ: Is this a product of being cross chain?

“Yes, absolutely. It’s great that you mention we have so many applications, because then this problem multiplies. It’s a complex matrix you find yourself in. That’s where the AtomicDEX doesn’t try to just streamline user interfaces, but also authentication layers for wider access. Our team is currently implementing Kepler and Metamask authentication capabilities. The end user should be able to use the technology without needing to go a predefined path. Instead, they can use what they’re comfortable with.” – Stadelmann

BZ: What benefits does AtomicDEX have over using a cross-chain bridge?

The key benefit here is that it’s 100% trustless in terms of there’s no custodial operation on our end or the AtomicDEX network. Every user that provides liquidity to the exchanges becomes an infrastructure provider at the same time. I think one of the big differences here that highlights the key factor of being trustless is that we don’t regulate control, liquidity, or order book mechanisms. This isn’t always the case for other AMM (automated market maker) multichain setups. There’s been critical issues that have ended up on the end user on some of these networks.

“Every user that uses AtomicDEX also represents one instance in the network. It’s like a node that can forward data packages to other peers, that can help other peers find new peers. The end user isn’t just someone trading. It’s someone who’s scaling up the DEX network. This is the key difference between AtomicDEX and smart contract AMMs. It’s a big difference in  regards to the technology, but we’re trying to solve similar problems.” – Stadelmann

BZ: A lot has changed since Komodo launched its token. How has it adapted to new technologies such as alternative layer 1s and NFTs?

“Back in the day, 7-8 years ago, we were the first ones to state a multichain vision of smartchain platforms. That’s how we’ve described Komodo for quite some time. There’s only one technology stack we’ve focused on since the start of Komodo: the exchange layer. At times other technologies would pop up that were hype and we would start some research, but it cost us too much resources. What we have been focused on is NFT support with AtomicDEX. Cross-chain NFT swaps aren’t live yet, but they’re in development. It’s similar technology to what AtomicDEX has now, but with different transaction types. By focusing on our DEX, it’s enabled us to have the biggest support of 2nd and 3rd generation blockchain protocols.” – Stadelmann

With over a decade of experience in blockchain technology, Stadelmann is a visionary that has built what may be the future of finance and beyond. As the industry is still in its infancy, there’s still debate over whether or not the future is multi-chain, or simply multi-layer, in the case of Ethereum. That being said, if the future is multi-chain, then Komodo and AtomicDEX have cemented themselves at the forefront of the revolution.