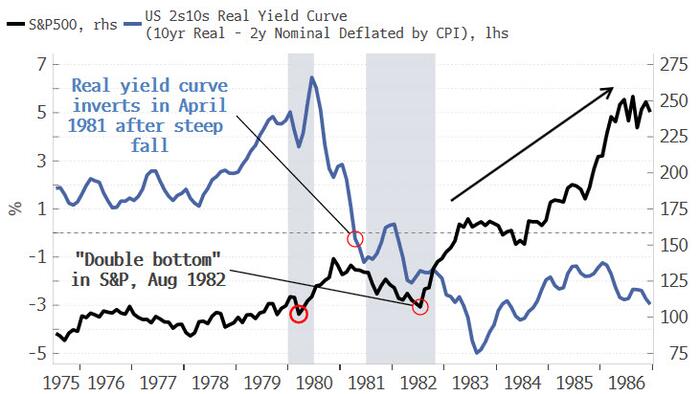 It’s a Gordian Knot, but it remains the central question for investors: When will the bear market in US equities and other risk assets be over?

Nobody has a crystal ball, but there are three strong contenders for conditions that will first need to be met:

Today’s backdrop is all about inflation. The seismic moves in assets and currencies around the world all boil down to the world’s largest central bank locked in a “death or glory” fight with unanchored price rises. The corollary is we won’t get a green light for risk assets to climb on a sustainable basis until the Federal Reserve has done enough to return inflation to a low and stable regime
The ultimate cause of the current inflation is the large fiscal deficits funded by monetary largesse in the years leading up to the pandemic. The pandemic itself and the Ukraine war didn’t jump-start the rise in prices, they merely worsened the already-changing underlying inflation dynamics.

The role of government spending is critical to understanding this. In a recent Fed paper presented at Jackson Hole, the authors show that when investors do not believe large fiscal imbalances will be stabilized the job of the central bank becomes extremely difficult.

Simply put, if there is a belief public debt will not be contained, it leads to a structural rise in inflation because any monetary tightening by the central bank causes growth to slump and the debt-to-GDP ratio rise. Due to the lack of fiscal credibility, debt buyers assume the rise in the ratio will have to be inflated away, and therefore expect higher inflation.

This is termed “fiscal stagflation,” and it means that the central bank can exacerbate inflation pressures by tightening rates when fiscal credibility is in short supply. The paper shows the massive fiscal interventions in Covid led to this loss in fiscal credibility in the US (although it is arguable it predated that, when Modern Monetary Theory came into vogue).

The first condition for an end to the bear market is thus fiscal credibility. With no strong commitment to bring debt down, there is little sign of it in the US at the moment.

The second condition is an inversion in the real-yield curve (as defined in the chart below). The curve steepened consistently all through the 1970s despite periods of very large interest-rate rises. The Fed in that decade did not have the will or the mandate to raise rates aggressively and persistently enough to break the back of inflation.

It wasn’t until Paul Volcker was at the helm that real progress was made. The Volcker Fed initially had “imperfect credibility” because it wasn’t willing to raise rates come what may, and the market assumed the central bank would ease when a recession hit, rejuvenating inflation. This was reflected in longer-term yields rising even as the Fed hiked aggressively.

After a false start in early 1980, when the Fed prematurely cut rates due to the slowdown, the central bank eventually got it right when it continued hiking aggressively through the 1981-82 recession, with rates peaking at 20%.

The real-yield curve began to flatten hard in 1980 as short-term real yields started to rise faster than long-term ones, and inverted in April 1981. Still, buying at that point would have been on the early side, before the multi-year rally started in August 1982.

Therefore a final condition is needed for the end of the bear market. Liquidity is one of most important medium-term drivers of equities. Its growth was still negative when the real-yield curve inverted in 1981, but by early 1982, it was positive and rising.

Buying the S&P in February 1982 after liquidity started growing would have faced about 10%-12% downside in the shorter term, before the position enjoyed an almost uninterrupted +220% rally.

With fiscal credibility in abeyance, the real-yield curve steep and still rising, and liquidity conditions very negative, none of the conditions are currently in place. Until they are it is difficult to have much confidence this bear market hasn’t got further to run.