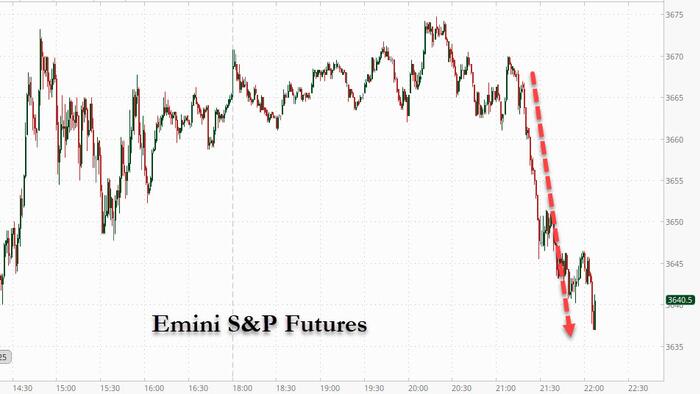 
So much can change in just 8 days: back on Sept 19, citing “Apple analyst” Ming-Chi Kuo, 9to5mac reported that Apple was “cranking up iPhone 14 Pro production to address higher demand.”

Well, maybe not, because moments ago, citing people familiar with the matter, late on Tuesday Bloomberg reported that contrary to expectations for a production boost, Apple is instead “backing off plans to increase production of its new iPhones this year after an anticipated surge in demand failed to materialize.

According to the report, the phone maker which hasn’t come up with a refreshingly new model in about 4 years but merely adds more megapixels and a slightly faster chip and presents it as “new”, told suppliers “to pull back from efforts to increase assembly of the iPhone 14 product family by as many as 6 million units in the second half of this year.” Instead, Apple will aim to produce 90 million handsets for the period, around the same level as the prior year and in line with Apple’s original forecast this summer.

In fairness, it’s not like outside analysts had any idea Tim Cook was about to pull a swticheroo: Apple had upgraded its sales projections in the weeks leading up to the iPhone 14 release and some of its suppliers had started making preparations for a 7% boost in orders. But just two weeks after the unveil of the new phone, Apple realized that this anticipated demand boost wasn’t coming.

And yes, while demand for higher-priced iPhone 14 Pro models may indeed be stronger than for the entry-level versions – after all the baseline model offers absolutely nothing new – at least until the market plunges another 20% and even those rich on paper have to cancel their orders, even so the overall supply will not change although in hopes of salvaging at least margins if not overall revenue, some suppliers are shifting production capacity from lower-priced iPhones to premium models… which incidentally is hardly as it was reported by MacRumors about a week ago.

Needless to say, the success – and failure – of the company’s leading device has implications for wide swathes of the tech industry, with suppliers including Taiwan Semiconductor and Hon Hai Precision Industry Co. depending on sales of iPhones and related devices as key revenue drivers.

All this is happening as China, the world’s biggest smartphone market, is in an economic slump that’s hit its domestic mobile device makers and also affected the iPhone’s sales. Purchases of the iPhone 14 series over its first three days of availability in China were 11% down on its predecessor the previous year, according to a Jefferies note on Monday.

And then there is the global recession: as Bloomberg notes, global demand for personal electronics has also been suppressed by soaring inflation, recession fears and disruption from the war in Ukraine. As a result, the smartphone market is expected to shrink by 6.5% this year to 1.27 billion units, according to data from market tracker IDC.

“The supply constraints pulling down on the market since last year have eased and the industry has shifted to a demand-constrained market,” said Nabila Popal, research director at IDC. “High inventory in channels and low demand with no signs of immediate recovery has OEMs panicking and cutting their orders drastically for 2022.”

The news that there is just not enough demand for the trinkets and beads of the world’s largest company promptly hammered futures, which not only gave up all overnight gains, but promptly tumbled back to session – and fresh 2022 – lows.