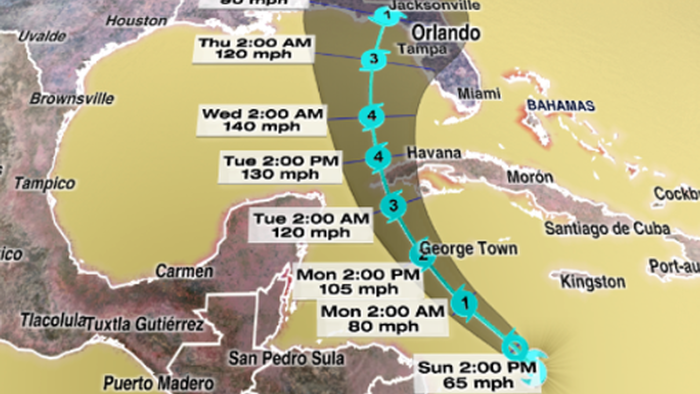 
Orange juice futures in New York could be on the cusp of an upside breakout to a new six-year high as Tropical Storm Ian may develop into a major hurricane, with a projected path toward Florida late next week.

Weather models on Sunday morning indicate Ian could become a major category four hurricane by Tuesday near Pinar del Rio, the most western province in Cuba. The storm is expected to hold the intensity until early Thursday when the track shows weakening to a Cat. 3 in the Gulf of Mexico and then Cat. 1 as it hones in on Florida.

Orlando’s FOX 35 meteorologist Brittany Lockley said as Ian comes closer to Florida, the storm will start to encounter unfavorable conditions, such as wind shear that will decrease intensity.

The ag community closely monitors the storm’s developments because citrus production in the state, the nation’s largest orange juice producer, could be impacted.

Here’s the US Department of Agriculture’s map of where citrus production in Florida resides, some of which appears to be in the storm’s path if models are correct (though we must note models are preliminary and could change).

Bloomberg provides a backdrop of the adverse weather conditions (due to La Nina) impacting citrus production in the Americas, also outlining the citrus greening disease decimating crops in the Sunshine State.

Supply concerns have mounted as global supplies are reaching historically low levels after two years of dry weather in Brazil, said Andres Padilla, an analyst at Rabobank International. The South American country is the top global exporter and stockpiles are at the lowest level since 2017, according to export association CitrusBR.

In Florida, growers are already facing one of the lowest crops on record after decades battling the citrus greening disease, said Ray Royce, executive director at Highlands County Citrus Growers Association, which represents about 15% of the state’s planted acreage. Growing areas already have very saturated ground after rains over the past two weeks, said Royce, and the disease can be more harmful when trees are under stress due to adverse weather.

Looking at the most-active orange juice futures contract on ICE Futures US, prices have traded laterally since mid-April, failing to break above $1.90 per pound. If storm developments worsen the prospects for the citrus crop in Florida — there could be a push higher in prices.

All eyes are on Ian’s path and let’s hope landfall isn’t anywhere near citrus groves in Florida because this would impact supply and increase breakfast inflation.