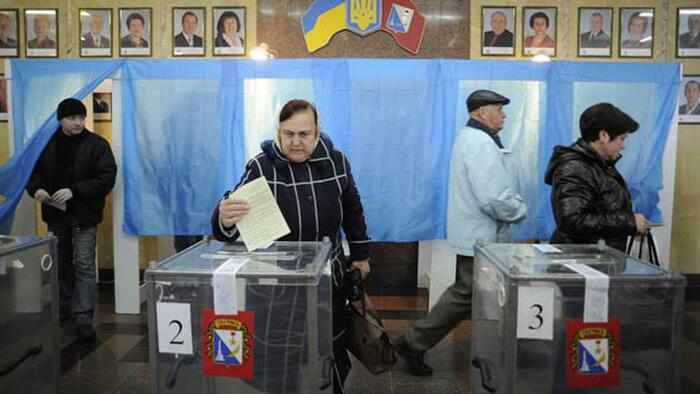 
On Friday Russian-occupied regions of Ukraine kicked off voting in referendums on joining the Russian Federation, according to announcements by a series of separatist leaders, in the biggest political development on the ground thus far in the seven-month long invasion.

These ‘popular referendums’ are taking place in four areas of Ukraine in the east and south, namely the self-declared republics of Donetsk and Luhansk, and in large parts of Kherson and Zaporizhzhia – despite these not yet being under full Russian military control. The voting is expected to continue over a period of five days.

In total the four regions make up nearly 20% of Ukraine’s territory, and signals huge escalation given this week President Vladimir Putin vowed to use “all the means at our disposal” – including the potential of nuclear arms – to defend Russia’s “territorial integrity”. Of course, by bringing whole swathes of Ukraine into Russia, Putin effectively issued a ‘by all means’ declaration for military defense of these territories.

The Ukrainian presidency’s office denounced the move as illegal and a “propaganda show”, saying, “Today, there is no legal action called a ‘referendum’ in the occupied territories.” According to a statement by Zelensky adviser Mykhailo Podolyak:

There is only – 1. [A] Propaganda show for z-conscription. 2. The territory of Ukraine that needs an immediate release,” he added, citing the “Z” letter and symbol that has become synonymous with Russia’s offensive.

Ukraine’s Western backers have also dismissed the voting as a “sham” – even as there’s widespread acknowledgement the results will likely be overwhelming in favor of joining Russia, given these are by and large places of a concentrated pro-Kremlin and Russian speaking population (especially among those Ukrainians who’ve remained there under Russian occupation).

People queueing up in #Kherson waiting for the doors to open so they can vote in the referendum to join #Russia pic.twitter.com/Tdw4fSjJem

Western pundits are also seeing the move toward annexation as an act of desperation, following Ukrainian forces’ largely successful counteroffensive which has threatened Moscow’s grip on the east in particular.

But officials from the two breakaway republics in the Donbas in particular have pointed to years of shelling and atrocities conducted by Ukraine’s military and nationalist militias such as Azov battalion.

According to international figures, some 14,000 people had died in total among both sides of fighting in what was essentially a localized civil war since even before the current conflict, since 2014. The Ukrainian government has all along initiated polices in attempts to stamp out Russian language and culture.

Referendum voting for Donetsk and Lugansk People’s Republics, as well as Zaporozhe and Kherson regions among others, to become a part of Russia, has begun & will continue until 9/27. If they vote yes on joining, it will add ~6 Million people to Russia & reduce Ukraine by 20%… pic.twitter.com/pnGJkG3Daa

“The long-awaited referendum has started, which is designed to restore the fair course of things in our land, to return peace to our homes, to consolidate the status of Donbas as part of our historical Motherland – Russia,” Vladimir Bidyovka, head of the People’s Council of the self-declared Donetsk People’s Republic said in a statement on Friday’s referendum.

This appears to be a point of no return in the conflict, also following Putin’s ‘partial mobilization’ order this week, with Sky News on Friday quoting the Kremlin as saying, “The negotiation process with Ukraine is required to achieve our goals, but we see no signs of resuming it.”