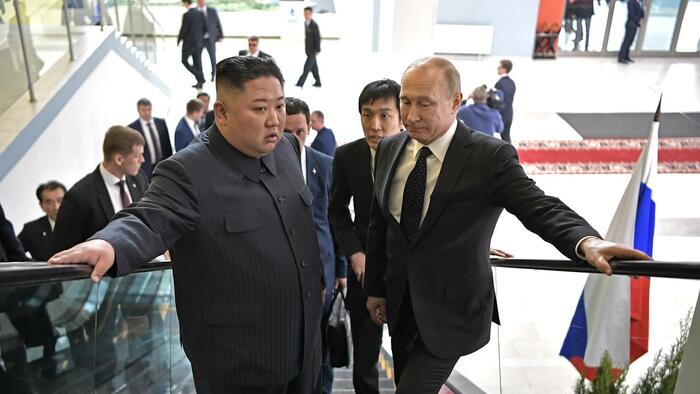 
North Korea on Thursday vehemently denied allegations by US intelligence that it has been providing rockets and artillery munitions to Russia for the war in Ukraine, denouncing the latest Washington attempt to smear Pyongyang’s standing and reputation on the world stage with mere “rumor”.

“We have never exported weapons or ammunition to Russia before and we will not plan to export them,” a statement by a defense ministry official published in state media said. “It is not sure from where the rumor originated which the U.S. is spreading, but it is aimed at tarnishing [North Korea’s] image.”

Rumors and speculation persisted throughout the summer months that Russia was receiving military help from North Korea – this after the Biden administration first leveled the charge that China had also been giving behind-the-scenes help, including on sanctions evasion.

For example, in early August Business Insider reported while citing Channel One Russia that Pyongyang said it is willing to send 100,000 “volunteer” troops to help Vladimir Putin execute the ongoing invasion of Ukraine. Russian military pundit Igor Korotchenko even made the claim to the state broadcaster, saying further that the DPRK military could provide a “wealth of experience with counter-battery warfare.” But nothing in terms of evidence of what would on that large-a-scale be an almost impossible to hide logistical feat ever emerged.

Earlier this month The New York Times reported on a US intelligence assessment which pointed to Moscow purchasing North Korean military equipment amid Kremlin fears of shortages following a half-year of the grinding Ukraine invasion. According to NYT’s September 6 report:

The United States provided few details from the declassified intelligence about the exact weaponry, timing or size of the shipment, and there is no way yet to independently verify the sale. A U.S. official said that, beyond short-range rockets and artillery shells, Russia was expected to try to purchase additional North Korean equipment going forward.

And below is the fresh response from North Korea on the persisting US administration charges, slamming it for advancing an unfounded “rumor”:

Recently, the U.S. and other hostile forces talked about the “violation of a resolution” of the UNSC, spreading a “rumor of arms dealings” between the DPRK and Russia.

Not only the development, production, possession of military equipment, but also their export and import are the lawful right peculiar to a sovereign state, and nobody is entitled to criticize it.

We have never recognized the UNSC unlawful “sanctions resolution” against the DPRK, which was cooked up by the U.S. and its vassal forces.

The White House has meanwhile offered little in the way of “confirmation” – with statements remaining ambiguous. “We don’t have any indication that the purchase has actually occurred yet so it’s difficult to say what it’s actually going to end up looking like,” US national security spokesman John Kirby said in a press briefing weeks ago.