Get Your Free JPY Forecast

The Japanese Yen is soaring during Thursday’s US session following overnight news that the Ministry of Finance (MoF) intervened in currency markets to stem the weakness of the Yen. This is the first intervention to support the Yen since 1998, and it appears the government had lost patience with the currency’s decline. The MoF intervention came hours after the Bank of Japan left interest rates unchanged and reaffirmed its commitment to ultra-loose monetary policy. It now appears that the government and the central bank are at odds, with 145 on USDJPY the unofficial line in the sand.

Following last night’s BoJ meeting, USDJPY briefly spiked back through 145 as the central bank left rates unchanged. There were questions lingering into the meeting about potential FX intervention or possibly a widening of YCC (yield curve control) bands, but ultimately no surprises were on offer. It wasn’t until a few hours later that fireworks popped off.

The sudden announcement by the MoF saw USDJPY plunge over 500 pips, as traders rushed to close longs. Following some respite during the Euro session which saw the cross climb back above 143, selling resumed once traders came online in New York. Whether this is a trend reversal or just a blip in the larger move higher remains to be seen. Rate differentials do not support a massive unwind of the carry trade just yet, so it would not surprise me to see price retrace large portions of the overnight decline.

GBPJPY has also been in freefall this session, as post-BoE (Bank of England) Sterling weakness has exacerbated the overnight Yen trend. Price put in a hard top on September 13th around 167, and has been in freefall since. Today’s range alone is almost 540 pips! After slipping below the 50-day moving average (MA) and the 200-day MA, sellers have pushed price to key fib support. GBPJPY now sits at the 50% retracement of the advance off the yearly lows, which roughly corresponds with the 160 psychological level. If bulls can step in and hold this level, we could look for a pop to the 0.618 retracement just below 162. 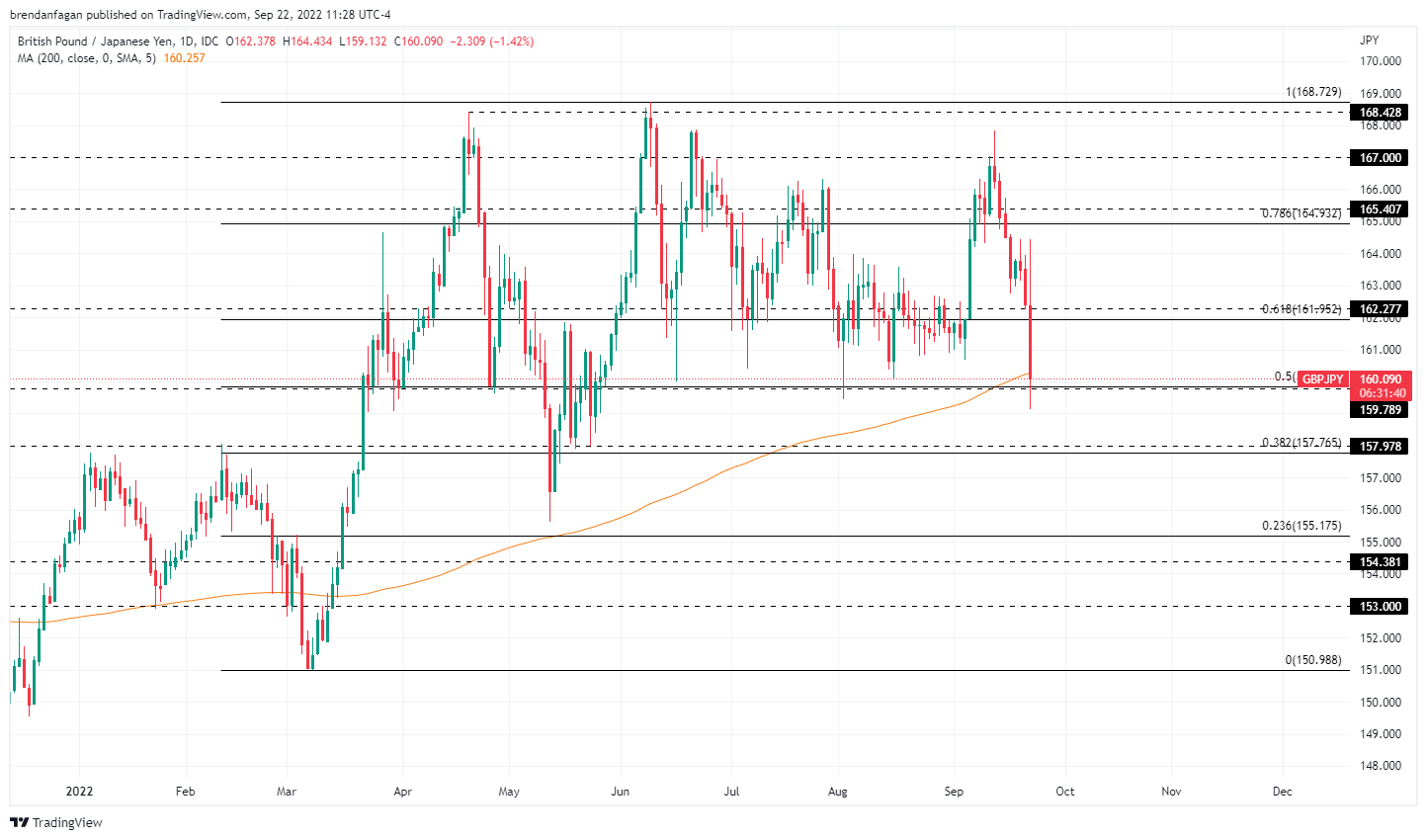 AUDJPY is another Yen cross that has been in a strong downtrend lately due to the risk-averse nature of financial markets. A combination of seasonality and sentiment has seen the cross tumble from a monthly high of 98.69. Often seen as a proxy for risk, AUDJPY’s decline has mirrored that of the S&P 500 and other major equity benchmarks. The decline has stalled here at this key support zone around 93.50, which successfully halted a 200 pip decline back in mid-August. If bulls can defend this area, which so far they have, AUDJPY could look to retest the key 95.30 level. A failure here at support could paint a bleak picture for risk assets globally. 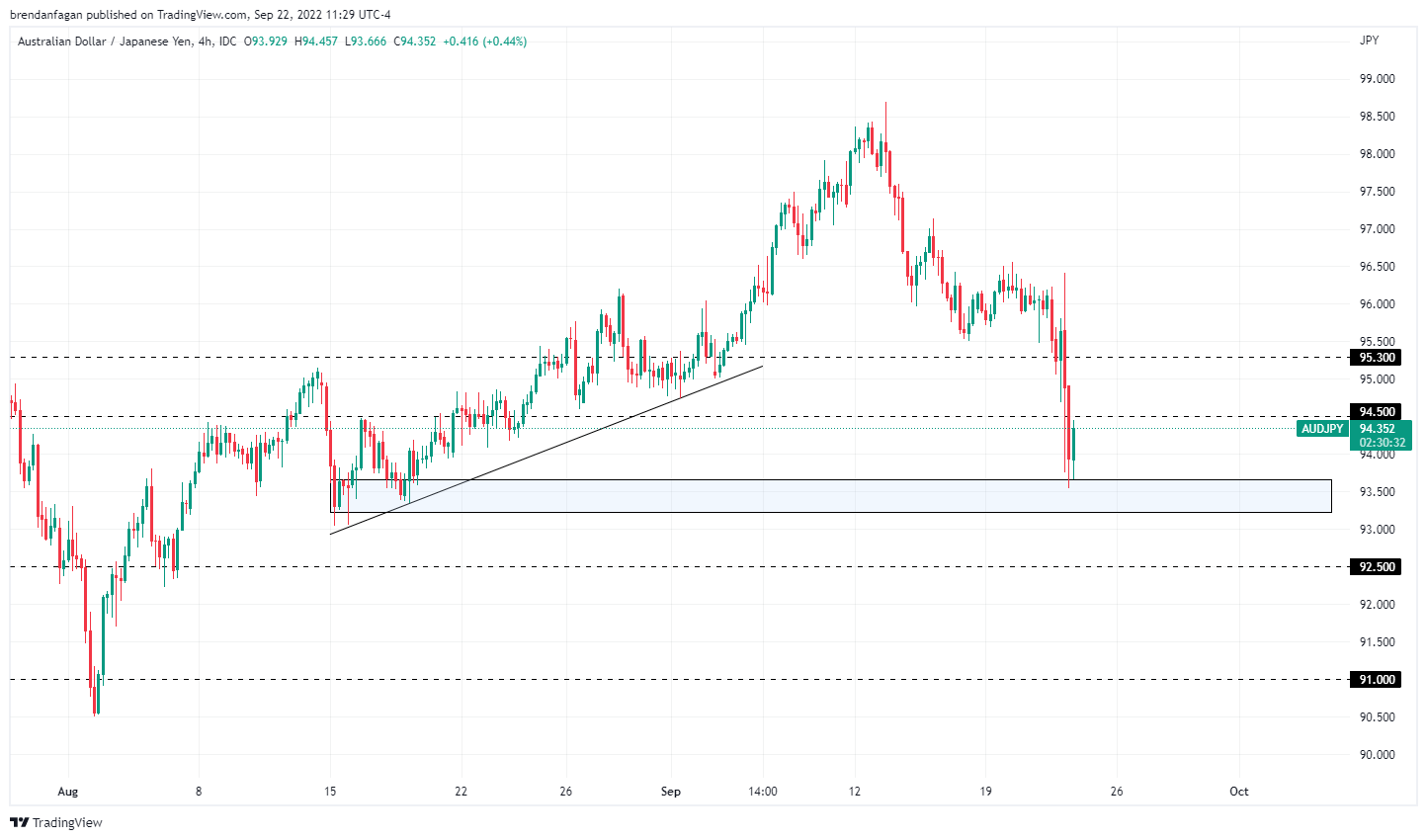 Last but not least, EURJPY has also notably turned it’s head here in September following a robust August melt higher. That run into 145+ came as markets moved to price in a much more aggressive ECB than was previously anticipated, with volatile interest rate differentials taking their toll on the EURJPY rate. Price has fallen sharply off those yearly highs, with EURJPY currently testing the key 140 psychological level. Given the bleak outlook for continental Europe this winter, it is hard to be bullish Euro, even against the Yen. Recession risks and growth fears could see rate differentials collapse in the coming months, which may usher in prices toward the bottom end of the yearly range. For now, it appears that the winner in this exchange rate battle will simply be the “better of a bad bunch.” 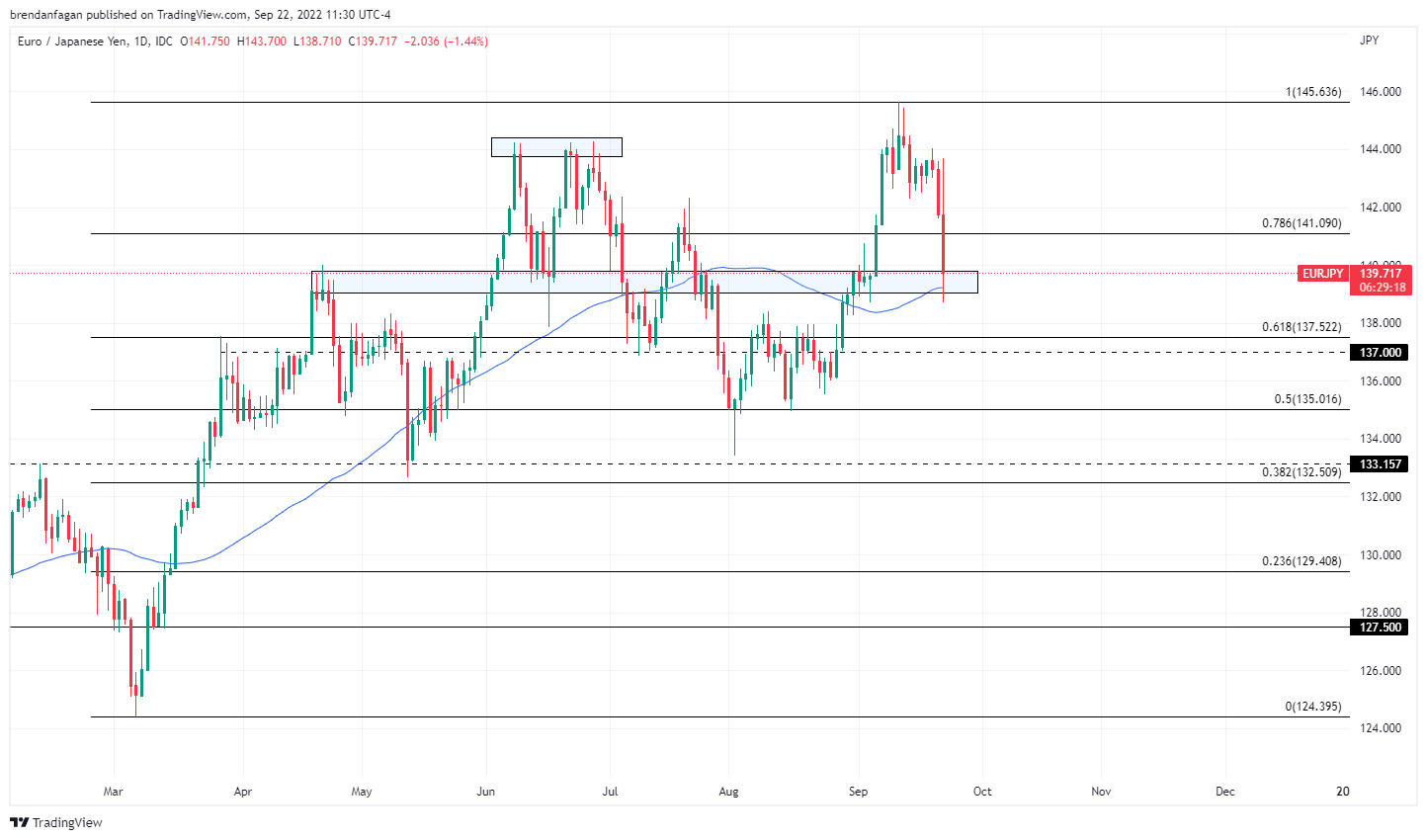 Whether you are a new or experienced trader, we have several resources available to help you; indicator for trackingtrader sentiment, quarterlytrading forecasts, analytical and educationalwebinarsheld daily,trading guidesto help you improve trading performance, and one specifically for those who arenew to forex.