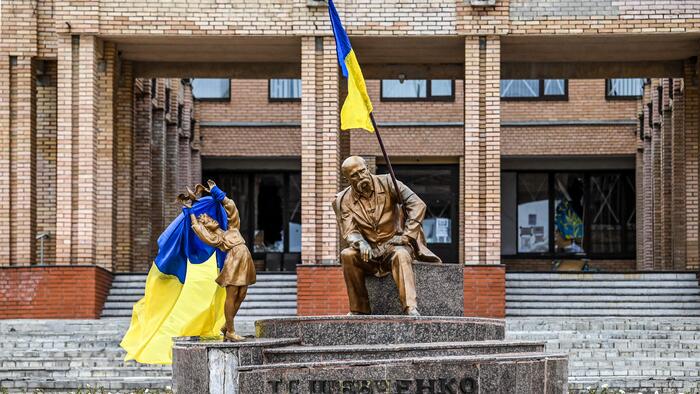 
The Ukrainian government is touting a weekend advance in the county’s east at an “astonishing” rate as the major counteroffensive announced by Kiev over a week ago continues. Western news headlines are also widely echoing the new optimism after months of the steady Russian takeover of the east, which lately drifted into a stalemate along the front lines.

On Saturday the Russian military issued a rare acknowledgement of a “regrouping” of its forces in Kharkiv Oblast. Kiev and its Western backers are taking the statement as an admission of retreat: “To achieve the goals of the special military operation to liberate Donbas, a decision was made to regroup Russian troops stationed in the Balakliya and Izyum regions, to bolster efforts along the Donetsk front,” the defense ministry explained.

Ukraine’s deputy head of the Kharkiv region military administration, Roman Semenukha, has since announced on a public TV broadcast the liberation of at least 40 towns and villages: “We can officially announce the liberation of more than 40 settlements. The situation is changing incredibly quickly and there are many, many more such [de-occupied] settlements,” he said.

“The situation is dynamically positive. And indeed the situation is changing,” he said, noting these 40 settlements were places where Ukrainian forces now have total control of the situation. In the comments he denied that it was simply a matter of Russian forces strategically withdrawing from these front lines to deploy elsewhere, but that—

“There are fierce, fierce battles in many areas of the front and everything is very, very difficult. If we are talking about the military component, then you just have to be patient.”

In some cases towns which have been held by the Russian army for multiple months running appear to have been penetrated by the Ukrainian counteroffensive, such as Kupiansk in east Ukraine, which served as a strategic supply hub for Russian forces.

.@TheStudyofWar map shows the extent gains Ukraine has made (blue) during its ongoing counteroffensive. It’s simply staggering. Russian forces have been routed with many abandoning their positions and weapons to retreat. pic.twitter.com/0EZ4BSVwDn

According to The Moscow Times, pro-Russian Donetsk officials have acknowledged the intensified fighting is putting pro-Kremlin forces under strain in the east:

Ukraine’s push appears to have caught Russian troops largely off guard. Moscow made the surprise announcement Friday it was dispatching reinforcements to Kharkiv, with images on state media showing tanks and artillery and support vehicles moving in columns on dirt roads.

Denis Pushilin, a pro-Russia separatist official, said Saturday that the situation in the town of Lyman in the Donetsk region was “very difficult” and that there was also fighting in “a number of other localities,” particularly in the northern part of the region.

Ukraine’s chief commander of the armed forces General Valeriy Zaluzhnyi said on Sunday that his army has pushed Russian forces away from the north of Kharkiv to within 50km of the border with Russia for the first time since the invasion began more than six months ago.

Ukrainian flags have been seen and widely reported as being raised in villages close to the Russian border, including the town of Kozacha Lopan.

Expect a Russian escalation in the US proxy war soon. The NATO led counteroffensive with NATO weapons is putting pressure on Putin inside of Russia. This may lead to a change of status from “Special Operation” to a declaration of war and the use of a far more aggressive approach.

Currently there are media rumors saying Moscow is preparing to issue a formal declaration of war, as opposed to a current limited “special operation” – which would mean greater mobilization across armed forces branches and society. The pressure within Moscow political circles on Putin to do so will continue to grow amid Ukrainian forces’ positive momentum, as as the US and NATO continue ratcheting up the already steadily flowing weapons systems.