Today is Labor Day in the United States when we celebrate the American worker. Yes, the American worker who now mostly works at home and complains because Zoom is too tiring. Although, I guess if I am being fair, it’s really about the workers who really did build the cities, the bridges, the skyscrapers, the roads. Many of whom, Way Back When, were members of unions.

No self-respecting economist is a fan of unionization. Restricting the supply of labor is as toxic to a free market system as is the restriction of, say, energy. As if that would ever happen. And when we restrict the free flow of one of the factors of production, you get less production and/or higher prices, which brings us naturally to our weekly topic of .

In 2022, there has been a marked uptick in unionization activities in the United States, the likes of which we haven’t seen for decades. The unionization of Amazon (NASDAQ:) (which, among other things, has pushed Amazon’s P/E ratio to the rock-bottom level of 116x…poor Bezos!) is probably the most celebrated recently, but the National Labor Relations Board reports that labor is winning three-quarters of their elections.

Given that this article is about inflation, you might surmise that the increased unionization activity concerns the pressure that workers are feeling from steadily increasing inflation. But how to square that with the data last week from , which showed that wages for job-stayers increased at a 7.6% rate over the last year; for job changers pay increased at a 16.1% rate. (This is the part of the new ADP report that I think is most useful. The aggregate jobs numbers are no better or worse than the report, but this series looks to me to be similar to the Atlanta Fed’s Wage Growth Tracker but with a much larger data set).

Meanwhile, Median inflation is rising at a 6.3% pace. It’s still accelerating, but it looks like the median worker is still keeping ahead of inflation.

But behavior is not determined by the median but by the margin. People’s sense of inflation is determined not by the middle of the distribution but by the items they are buying that are rising sensationally, catching their attention. Gasoline going up caught everyone’s attention, but fewer are talking about the recent gasoline price decline. Ergo, even if the median worker is remaining ahead of the rolling thunder of inflation, he/she hears it coming.

And that is where unions have historically come into play. I always enjoy this next picture, which is created with BLS data through the end of 2021. The highs of union membership in the United States corresponded almost identically with the highs in core inflation, and the decline in the former mirrors the decline in the latter. 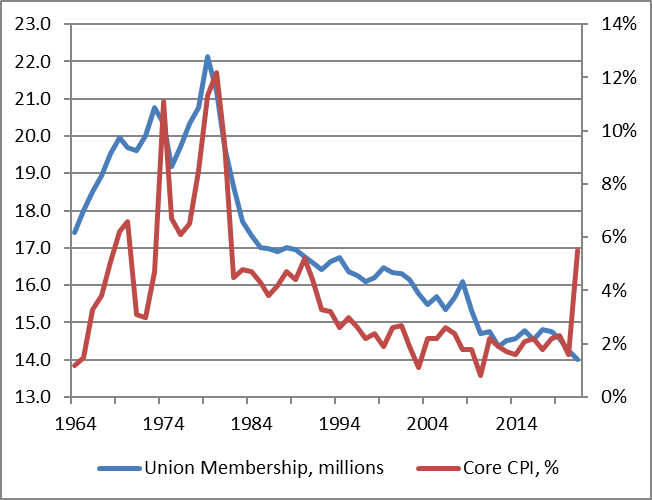 I don’t make any claim here that higher unionization causes higher inflation, although it probably does. But it’s certainly true that higher inflation causes higher unionization. Collective bargaining after all has less salience when inflation is very low and any raise at all likely covers an increase in the cost of living. It becomes much more important when prices are starting to run away to the upside. As I said, these are annual numbers. It will be very interesting to see how much union membership increased in 2022 when those numbers come out.

Taking a Step Back…

Speaking of jobs, the payrolls number this week was approximately on-target. The rose 0.2%, though, which was surprising. That happened partly because more people are now looking for work, which puts them in the labor force and unemployed (someone who isn’t looking for a job is not considered unemployed, nor part of the labor force). I think the fact that more people are looking for work, which can be a sign of strength, may not be so in this case. I suspect that as prices for food and other non-luxury items (shelter springs to mind) keep increasing, then more families are having to look for a second (or third) wage-earner. It’s the same economic fragility that makes unionization suddenly look attractive. In this environment, when there are still lots of job openings, means that there is another way to address the pinch: get another paycheck. Say what you will about Americans: it may be that many of them would prefer the handout but there are still many of them who are willing to lace up the work boots when necessary.

The job market, though, isn’t going to stay this robust forever. As interest rates rise and energy prices continue to bite, the economy will continue to slow. Whether we are in a recession or not right now, we will be before long. The magic number on employment is an 0.4% increase in the unemployment rate from the previous low. Since 1969, there have been ten times when the unemployment rate increased 0.4% above its prior low. Two of those occurred in the context of bumps higher during a long decline (July 1976, and February 1986). Seven of the other eight all preceded recessions and significant equity market declines. In each case, I measured the close of the month where the unemployment rate rose at least 0.4% off the lows, to the lowest subsequent monthly close.

March 2020 was sort of a special case, of course; the unemployment rate skyrocketed but by March the equity lows were already in, thanks to expansive central bank largesse.

The unemployment rate is still very near its post-pandemic lows, but as much as we would like it to I don’t think we’re going to see Unemployment drop further. The employment situation always lags behind the rest of the economy, and while the slowdown is uneven it is real. Especially given how generously the equity market is still valued, to me, that means we’re likely to see more declines ahead.

Disclosure: My company and/or funds and accounts we manage have positions in inflation-indexed bonds and various commodity and financial futures products and ETFs, that may be mentioned from time to time in this column.