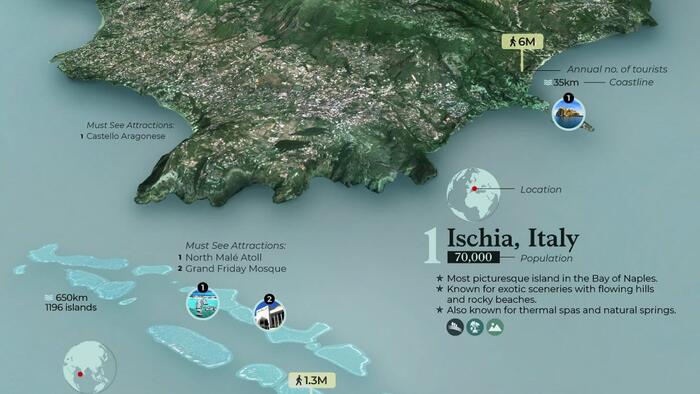 
After a pandemic-induced slump, travel is finally started to pick up again in many parts of the world. After years of waiting, where are people itching to go to on their next vacation?

Methodology of the World’s Best Awards

Before diving in, it’s worth summarizing the methodology and briefly explaining how T+L compiled their findings. Each year, T+L conducts an annual global survey that uncovers the top travel experiences worldwide.

In the survey, readers were asked to rate a range of things, including their favorite islands to visit. Islands were rated based on a few categories, including:

Each category was given a score of excellent, above average, average, below average, or poor. From there, each island’s final tally was calculated, based on the average scores across all categories. Below, we’ll dive into the 2022 rankings based on these scores.

The 5 Top-Ranked Islands to Visit

At the top of the list, there’s a good mix of European, Asian, and South Pacific islands. Here’s a look at the top five islands, along with some context that explains why respondents ranked them so highly:

Nestled in the gulf of Naples about an hour away from the mainland, this charming volcanic island takes first place because of its charming villages, pristine beaches, and welcoming locals.

It’s also well-known for its hot springs, which are easily accessible by either taxi or public transport.

Famous for its baby-blue waters, respondents ranked the Maldives as their second-favorite island destination. Located in the Indian Ocean, this collection of islands is well-known for stunning beaches, as well as excellent snorkeling and diving. With a wide range of luxury resorts, the Maldives is also a popular honeymoon destination.

This Indonesia island ranks third on the list because of its picturesque natural beauty, rich culture, and a diverse range of outdoor activities like surfing, diving, and hiking. It’s also well-known for its art, music, and traditional dance performances. As the only predominantly Hindu province in Indonesia, visitors get a chance to learn more about Balinese Hinduism.

Located in the Aegean Sea, Milos is well-loved by visitors because of its tranquil beaches. And while the island is a popular tourist destination, it offers a slightly slower pace that its neighbors Santorini or Mykonos.

This remote group of islands in the South Pacific Ocean ranked fifth on the list because of their rich marine life and friendly locals. Well-known for its excellent diving, it’s been labeled the “soft coral capital of the world.”

Seven of the top 25 island destinations are in Europe, making it first on the list by region. Southeast Asia comes in close second, with six islands in the top 25.

As the data shows, a majority of the islands rank highly because of their beautiful beaches and thriving marine life.

However, there are a couple of outliers on the list. One good example of an outlier is Mackinac Island, which is well-loved for its historical attractions (Mackinac Island is home to a colonial fort built in the 18th century).

One thing is clear from these rankings—whether you’re a diver, a history buff, or a foodie, there are a number of world-class island destinations that offer an experience of a lifetime.