The Australian dollar bucked the trend this week finding strength in a sea of red against the U.S dollar as markets prepare themselves for a hawkish stance by Federal Reserve Chair Jerome Powell at the upcoming Jackson Hole Economic Symposium. The upturn in the ‘pro-growth’ currency was fueled by China cutting interest rates on both the 1Y and 5Y loan rates in an attempt to stimulate growth and ease fears around the Chinese property crisis. Should these tactics work, the demand-side picture should rise and allow for greater commodity exports from Australia (iron ore, coal etc.). In conjunction with this announcement, commodity prices rallied providing further support for AUD.

Earlier today we saw the Fed’s Kashkari highlighting the need to tackle inflation by way of raising rates which may be a precursor to Jackson Hole – it is important to note however that Neel Kashkari has a reputation of being traditionally hawkish in his assessments.

Later today, the economic calendar is relatively light but focus will be on the U.S. durable goods orders release as well as the pending home sales figure which will give a better depiction of the housing market after yesterdays decline in new home sales. 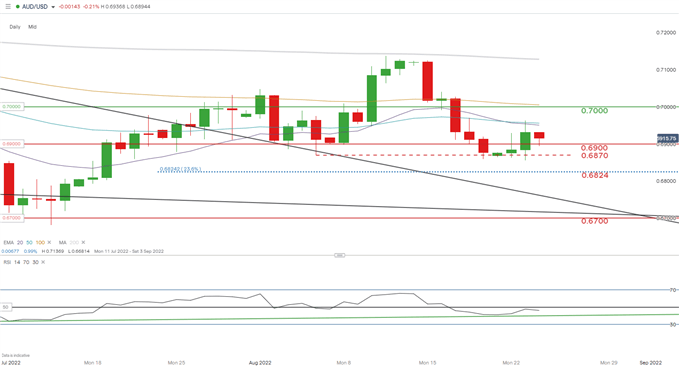 AUD/USD price action on the daily chart shows the August 5th swing low key inflection zone holding firm, coinciding with the 0.6900 psychological level today. The lower long wick (should today’s daily candle close in this fashion) maybe an early indicator to consequent upside before Jackson Hole. This being said, I do not suspect any significant price swings as markets remain hesitant pre-Jerome Powell.

IGCS shows retail traders are currently LONG on AUD/USD, with 66% of traders currently holding long positions. At DailyFX we typically take a contrarian view to crowd sentiment however, recent changes in long and short positioning results in a short-term cautious bias.