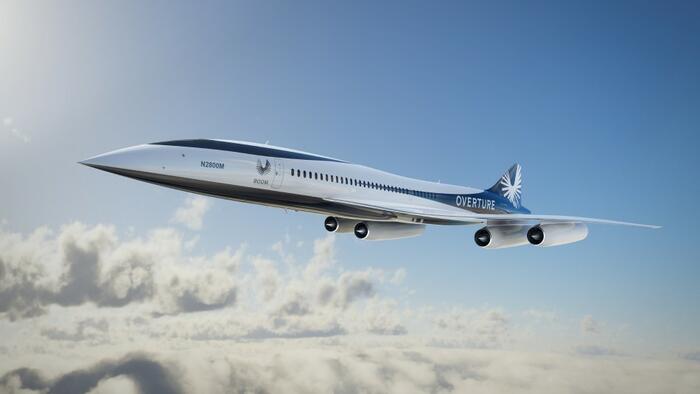 
In the nearly 20 years since the supersonic Concorde was retired, a new aeronautics company has developed a “sustainable” new airplane, that will shuttle between 60 and 80 passengers up to nearly 5,000 miles at a time, flying at Mach 1.7.

Denver-based Boom Supersonic has developed the “Overture,” which will run on “100% sustainable aviation fuel” (SAF), powering four smaller wing-mounted engines to keep weight and temperature balanced. It will also incorporate carbon composite materials for a lightweight, yet robust air frame.

The company has already scored contracts from the US Air Force and two airlines – with United Airlines committing to 15 aircraft once safety requirements are met, as well as an option to purchase 35 more. Japan Airlines has also pre-ordered 20 of them, while the company is creating custom applications for the government.

“Environmental performance is being considered in all aspects of Overture, from design and production to flight and end-of-life recycling,” reads Boom’s website. “The engineering team prioritizes circularity by repurposing used tooling, recycling components on the shop floor and leveraging additive manufacturing techniques that result in less manufacturing waste and lighter, more fuel-efficient products.”

As the NY Post notes, the plane will reach various destinations much faster than conventional airliners.

“With no afterburners and buzz-free engines, Overture’s takeoffs will blend in with existing long-haul fleets, resulting in a quieter experience for both passengers and airport communities,” reads Boom’s site, which notes that the signature sonic boom created when an aircraft exceeds the speed of sound will happen over the ocean so as not to disturb people on the ground.