The New Zealand Dollar rose against the US Dollar after the Reserve Bank of New Zealand hiked its official cash rate (OCR) by 50-basis-points to 3.00%, as expected. Traders are buying the Kiwi Dollar due to a slight increase in the central bank’s rate projection. The updated monetary policy statement (MPS) revealed that further tightening is required relative to the May MPS to achieve the bank’s desired economic objectives. The RBNZ now sees the cash rate peaking at 4.1% from the prior 3.95% projection.

New Zealand’s second-quarter consumer price index (CPI) increased to 7.3% from a year earlier, up from 6.9% in Q1. That was more than double the RBNZ’s 1% to 3%target range. However, financial conditions have tightened through Q2, evidenced by a moderating labor market and a drop in house prices. Job growth flatlined in the second quarter from the prior quarter, and house prices fell 2.3% over the same period. Inflation expectations and producer prices eased in the second quarter as well.

A slowdown in China’s economy has increased New Zealand’s chance of sliding into a recession, but an increase in tourism revenue may help to balance the risk. New Zealand opened its borders to international travelers on July 31, renewing a key avenue of economic growth. The focus for NZD now shifts to July’s trade data due later this week. 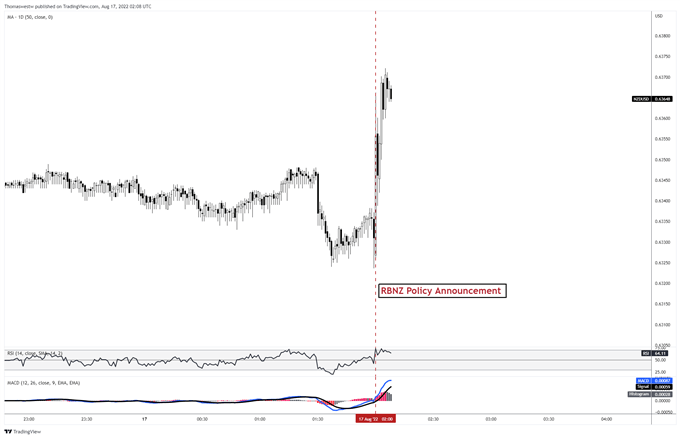