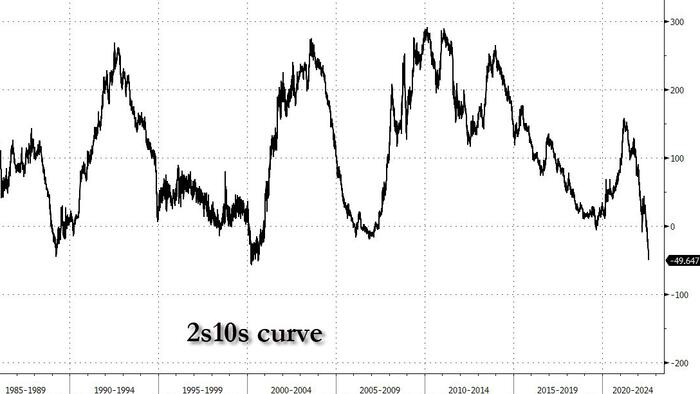 The inversion in a key segment of the US yield curve may deepen to levels not seen since the 1980s as competing concerns about higher policy rates and their economic impact play out in the markets.

Ten-year Treasuries now offer a yield of around 2.78%, compared with about 3.28% on two-year maturities, leading to a differential of minus 50 basis points. That spread may invert further to minus 65 basis points, and beyond, in the coming months as front-end bonds sell off more than longer maturities.

Employers stunned economists by adding more than half a million jobs in July. That print is likely to add to the Fed’s conviction about the economy’s resilience. Chair Jerome Powell remarked before the report that the “strong labor market makes us question the GDP data” that pointed to a recession.

Should that momentum in the economy continue to hold and inflation not abate as much as the markets are factoring in, the Fed is likely to take its policy rate into restrictive territory. Given that we haven’t even reached the neutral rate yet, a restrictive rate would be somewhere north of 3.50%.

The Fed’s dot plot in June showed the median year-end rate at 3.40% and at 3.80% for 2023. St. Louis President James Bullard, an influential voice on the Fed, has argued for front-loading the rate hikes to this year, meaning we could end 2022 at 3.75%-4% if inflation proves sticky.

Should that be the case, two-year yields could go well beyond this year’s peak of around 3.45%.

However, any increase in 10-year yields is likely to lag those at the front end, spurring a deeper inversion in the yield curve. While the economy has proved resilient so far, market skepticism will remain, acting to temper any increase in long-dated yields.

Indeed, the 10-year maturity is now trading at a premium of almost 68 basis points over its implied value of 3.4792% based on realized inflation and the Fed’s benchmark rate. While the 10-year yield may climb in sympathy with a higher Fed funds rate, I expect the security to still trade at a premium.

Those factors will mean that the spread between 10- and two-year yields may become the most inverted since the early 1980s, when then Chair Paul Volcker was wrestling with mammoth inflation by raising rates successively.

While a search for duration would have proved to be a failure earlier in the current cycle, now may be the time to get set for a meaningful quest.