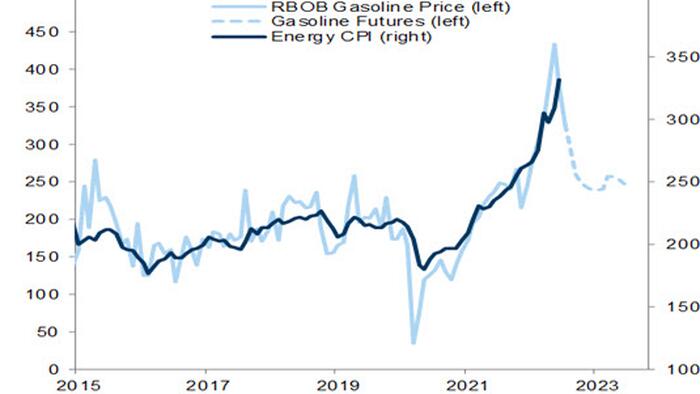 
As Bloomberg’s Sebastian Boyd writes, it’s hard to overstate the importance of Wednesday’s US inflation report to a market that’s split between two different views of the economy, and the Fed’s plans for dealing with it.

The report is critical because – among other things – two weeks ago, at his July 27 press conference, Powell said the Fed would slow the pace of hikes at some point… but he also made clear that the central bank thinks the labor market remains strong and that is offsetting the slowdown in demand. Friday’s nonfarms payrolls data bore that out in a stunning way, with the US economy creating far more jobs than any of the 71 economists in Bloomberg’s survey expected (granted, the Household survey painted an entirely different picture but we’ll cross that bridge in time). For all intents and purposes, the market saw the number as super hawkish, and while Fed funds were pricing in a 36% chance of a 75-bp September hike before payrolls, they’re now looking at a 74% probability.

There were more pre-CPI signals in the bond market on Tuesday, when the stellar three-year Treasury bond auction proved that if there are any jitters about another big upside surprise, the bond market doesn’t see it. As Bloomberg’s Alyce Andres pointed out, the short end is acutely sensitive to expectations for both rates and inflation, so were traders worried about a surprise on Wednesday, the sale could have struggled. In the event, the auction went fine, and some traders were seen setting themselves up for a downside inflation surprise. Finally, as we noted earlier, the curve bear flattened even more – as it has been doing since the nonfarm payrolls data on Friday – and the 2s10s curve is set a new multi-decade low. That suggests that investors are bracing for more hawkishness from the Fed, as inflation remains stubborn and the labor-market tight, “and that the the market thinks the space for then avoiding a recession is getting narrower and narrower.”

So what does the market expect?

Consensus expects that headline CPI will rise just 0.2% in July, far below the previous month’s 1.3% increase, largely on the back of a sharp drop in energy prices. Core CPI is expected to rise by a brisker 0.5%, still down from last month’s 0.7%.

In its CPI preview note (available to pro subs along with a bunch of other pre-CPI reports) Goldman highlights three component-level trends for the July report.

Elsewhere in the report, Goldman expects continued increases in auto prices (new +1.0%, used +0.5%, parts +0.8%). Additionally, retailers have noted that they anticipate cutting prices in coming months in order to reduce inventory stocks from elevated levels, and apparel prices are expected to shrink by 0.8%.

That said, even assuming sequential inflation growth slows to a trickle, the chart below from BofA shows how long it will take for inflation to normalize on an annual basis.

In terms of the market reaction, Goldman’s John Flood writes today that “a softer than expected reading (anything better than prior of 9.1%) likely “stops in” more buyers. I think the print will have to be quite HOT (headline well above prior reading of 9.1%) to apply any real pressure to the tape, because sellers are hard to come by. I think this dynamic essentially rings true for remainder of August and then we can reevaluate post labor day. As painful as it is any headline reading that falls btwn soft and very hot (really anything lower than 9.5%?) keeps current trend of choppy and higher going (as corporates and quants continue to methodically buy).“

In other words, while a CPI miss is likely – especially at the headline level – and it will push risk assets even higher, this is the worst possible outcome for the Fed which will be left with only red-hot jobs as the only “real time data” preventing it from pivoting, and why the next time we get a big NFP miss, stocks will hit escape velocity.