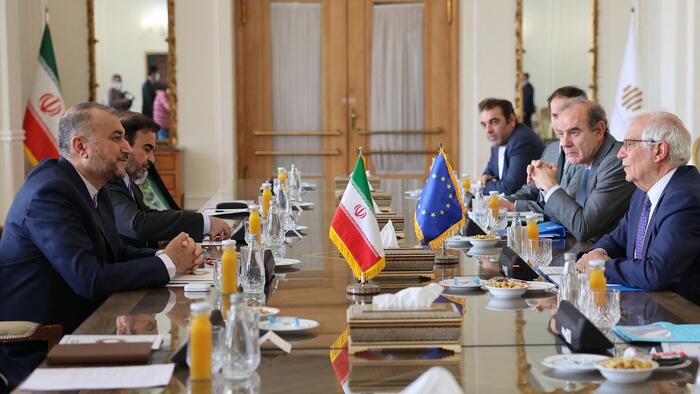 
European Union efforts to salvage a rebooted Iran nuclear deal appear to have produced a “final text” which is described as tackling all remaining issues. The Vienna talks are now being declared definitively over.

“After 16 months of torturous on-and-off indirect negotiations to restore the deal, the European Union’s foreign affairs chief Josep Borrell suggested there was no more room for negotiation on the draft now on the table,” the Associated Press writes of the fresh announcement.

Yet a final decision for sign-off and implementation of a restored JCPOA remains in both Washington and Tehran’s hands, with the Islamic Republic long blaming the United States for stalling and seeking to sabotage a finalized deal.

“What can be negotiated has been negotiated, and it’s now in a final text,” EU foreign policy chief Josep Borrell announced on Twitter. “However, behind every technical issue and every paragraph lies a political decision that needs to be taken in the capitals.”

Borrell has in the last weeks been traveling between capitals, including Tehran, in hopes of salvaging negotiations and a finalized draft deal. For Iran, the chief priority remains getting an inquiry on uranium particles found at undisclosed sites resolved in its favor.

The Wall Street Journal detailed at the start of this week, “However, Iran came into last week’s talks insisting that the U.N. atomic agency’s three-year probe into undeclared nuclear material found in the country must be closed down if the nuclear deal is revived.”

The report noted further that “Several Western diplomats said Sunday that Tehran has doubled down on this condition in the past few days of talks and there is no agreement on the issue.” Israel has been the most outspoken country, though not a signatory to the JCPOA or part of the Vienna process, charging that Tehran is pursing a nuclear bomb. Israeli leaders have long been lobbying the Biden administration to reject a restored JCPOA, seeing it as Iranian cover for a hidden nuclear weapons program, a charge which Iran’s leaders have denied.

Meanwhile, Russian envoy Mikhail Ulyanov briefed reporters, saying optimistically that “we stand five minutes or five seconds from the finish line.” But it will be interesting to see where the White House officially stands during press briefings and follow-up statements in the coming days.