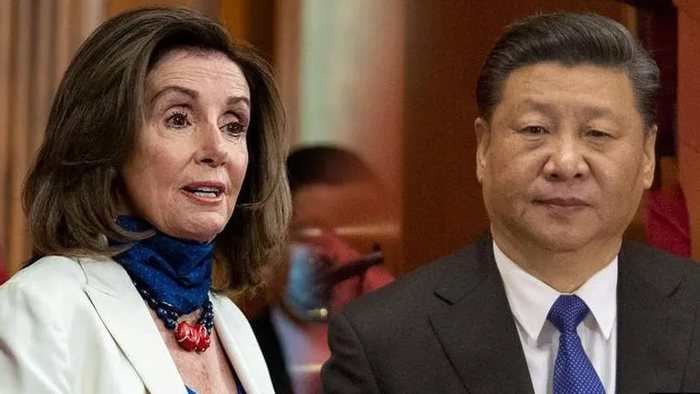 Pelosi was asked about Xi’s reaction to her being the highest American official to visit the self-ruled island in 25 years, to which she answered by saying xi is behaving like a “scared bully” given he’s in a “fragile crisis” in the wake of her trip.

“I think that he’s in a fragile crisis … he has problems with his economy. He’s acting like a scared bully,” Pelosi said early Tuesday on MSNBC’s “Morning Joe” she said when pressed on what she’s “learned” about the leader.

“We met with every Speaker in all five countries, and their members of parliament, so it’s very productive. And in terms of Taiwan, we were not going to take Taiwan off our list because the president of Taiwan has invited us.” She then added that the “President of China does not do our schedule.”

And yet for all her tough talk lashing at at the “bully” Xi, it remains that 24 million Taiwanese find themselves surrounded, commercial aviation routes blocked and some key trade shipping lanes cut off.

PELOSI: “China is one of the freest societies in the world.”

On Tuesday Taiwan continued to complain about Chinse forces continuing to breach the median line in the strait, with the defense ministry further citing that 45 PLA aircraft were detected in the region.

Meanwhile, there’s a bit of irony in the timing of Pelosi’s blistering comments aimed at Xi and China, given they come the day after the FBI raided Mar-a-Lago, setting off a political firestorm in the US. Chinese state media pundits were quick to pounce on the turmoil…

Interesting. The whole world is watching: how the US current Administration is discrediting the former president and depriving him of his equal right to run in the 2024 election. pic.twitter.com/6cCCbufoeL

Former state-backed Global Times editor and pundit Hu Xijin had this to say Tuesday – “The whole world is watching: how the US current Administration is discrediting the former president and depriving him of his equal right to run in the 2024 election.”