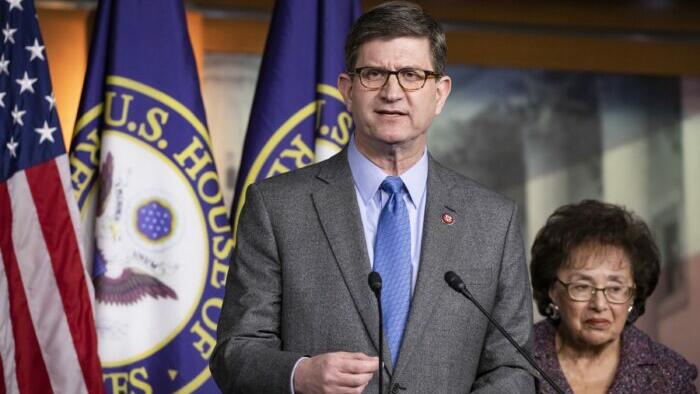 An aide to a congressman impersonated an FBI agent and openly carried a gun, violating the law in Washington, according to court documents.

Sterling Carter, who worked for Rep. Brad Schneider (D-Ill.) at the time, was spotted on Nov. 14, 2020, wearing a black shirt with “Federal Agent” emblazoned across the front and back, and equipped with a full police duty belt that contained handcuffs, a pistol, two magazines, and a radio with an earpiece, according to an affidavit filed by U.S. authorities in District of Columbia court.

When officers approached Carter to figure out his identity, he pointed to a badge on his belt and said that he was with the FBI. When asked for his credentials, Carter said he did not have them on him, and hopped in his vehicle and sped away despite being ordered to stop.

The officers were unable to chase the man down.

Officers and agents with the U.S. Secret Service, the U.S. Capitol Police, the FBI, and the Metropolitan Police Department launched a joint effort to figure out the identity of the man, and eventually confirmed him as Carter through contact with the seller of the t-shirt and the company from which he obtained a custom license plate.

The owner of the property at which Carter resided and neighbors told agents that Carter was seen dressing as a member of law enforcement. However, officers found out that Carter was a staffer for a member of Congress. They also learned he did not have a concealed weapons permit or any other firearm registration certificates.

A search of the residence turned up a Glock 19 semi-automatic firearm, magazines, a holster, cleaning gear, a receipt for siren installation, and an invoice for the shirt.

Carter was given the option to resign or be fired, and he chose to resign, according to the affidavit. According to other documents, he started with the office in August 2019 and stepped down in January 2021.

Carter was arrested on Jan. 29, 2021, and charged with false impersonation of a police officer and carrying a pistol without a license.

In exchange for pleading guilty to the latter charge, the former was dropped.

Carter was held in jail for 81 days during the case.

A Washington judge in July 2021 sentenced him to probation and a suspended jail sentence.

The case was first reported by the Daily Beast.

Schneider’s office did not respond to a request for comment.

A federal case was opened in February after the FBI found Carter had forged Schneider’s signature and given himself temporary raises that yielded him approximately $80,000.

According to an FBI agent’s affidavit, Carter, as director of operations for the congressman, would fill out payroll forms when an employee was given a raise or bonus.

Only Schneider and his chief of staff had the authority to authorize a bonus or a raise.

Carter would fill out one form that reflected a temporary salary increase proportionate to the bonus that was being given, and a second form that returned the employee’s salary to the original level so the bonus wouldn’t turn into a permanent pay raise.

He concealed what he had done by presenting to the chief of staff a spreadsheet containing inaccurate data.

Carter pleaded guilty to the charge, theft of public funds, and faced up to 10 years in prison.

Prosecutors recommended a sentence of 12 to 18 months, saying the offense “constituted a serious breach of the public trust” and such a sentence “can be a warning knell for all those public officials who consider using their position in the government to steal taxpayer dollars from the United States Congress.”

Lawyers for Carter noted his only prior conviction was for carrying a pistol without a license and argued the lack of criminal history outside of that “weighs in favor of a more modest sentence than recommended by the advisory guideline range.”

“It is a property offense. The offense does not involve any violent acts. There is no evidence that any firearms or weapons were employed to accomplish the offense. No physical injuries were sustained by anyone. While these undeniable factors do not absolve Mr. Carter from criminal liability the nature of the offense again favors a modest sentence,” they added.

The defendant moved for a sentence of home confinement.

“We believe the sentence was harsher than necessary,” Robert Jenkins Jr., an attorney representing Carter, told The Epoch Times in an email, adding that Carter’s “conduct warranted punishment his sentence was more severe than many similar defendants in white collar fraud cases.”