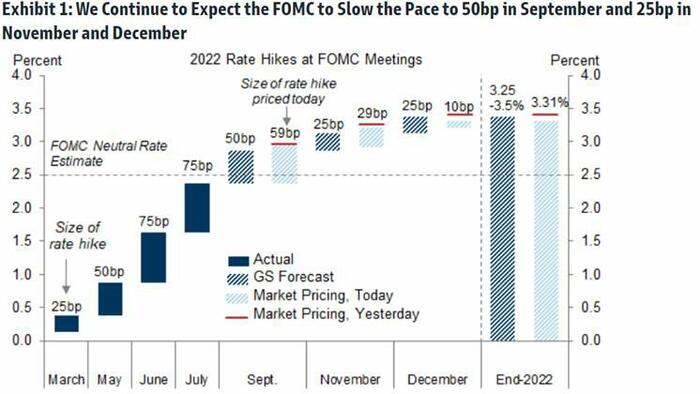 
According to superficial reads of today’s jobs report (which however are sorely lacking for reasons we explained earlier), the July jobs report “blew the doors off expectations” in the words of JPMorgan, as nonfarm employment increased by 528,000 and the unemployment rate ticked down to 3.5%, the lowest in over a half century.

What does that mean for the Fed? Well as we noted earlier in the handful of Wall Street kneejerk reaction we summarized, many strategists believe that a Fed pivot is now out of the picture and a 75bps rate hike in September is all too likely.

In this post we will focus on just two, the most important ones – the views of JPMorgan and Goldman Sachs.

Starting with the first, JPM’s chief economist Michael Feroli writes this morning that today’s numbers “should mollify recession fears but amplify concerns that the Fed has a lot more work to do” and he now thinks “a 75bp hike in September looks likely.” He continues:

The inflation worries motivating the Fed will only be heightened by this jobs report, as average hourly earnings increased a firm 0.5% last month and were revised up a tick in June, leaving the year-ago figure running a hot 5.2%. The work-week was unchanged at an upward-revised 34.6 hours. The only disappointing detail of the July numbers was the tick down in the participation rate to 62.1% (though that decline was due to the jumpy teenage participation figure). It’s still early days, but we continue to pencil in 1.0% for 3Q GDP growth; unless that tracking is revised up substantially we could be in for another challenging quarter for both productivity growth and corporate profit growth.

For the Fed, JPM continues to look for two more 25bp hikes in November and December, bringing the terminal rate to 3.5-3.75%. However, the update is that unless the data stumble, a case could be made for going more than 75bp at the next meeting, though he adds that “if the FOMC rejected that option in June and July it would seem they have an aversion to ripping off the bandage. So far they also seem averse to hiking inter-meeting.”

What about Goldman? For the most part, the bank’s assessment was similar to that of JPM, full of superlatives (although we expect the bank will refocus on the Household Survey weakness as it did last month). However, when it comes to the Fed, Goldman was more sanguine and wrote that  “today’s report indicates an overheated labor market that continues to tighten further. We continue to expect another 100bp of Fed funds rate increase over the next three meetings: +50bp in September and +25bp in both November and December, with risks skewed towards earlier or larger increases.“

The question now is what does next week’s CPI print show, because with everyone all hawked up, the last thing the market needs is a huge inflation miss pushing everyone back to square one.