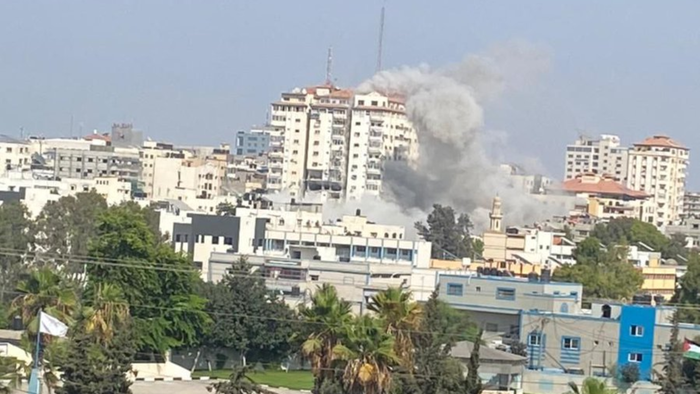 
Overnight, Israel declared an “emergency” on its southern border with the Gaza Strip, citing fresh tensions and unrest facilitated by the Palestinian Islamic Jihad. Israeli settlements and agricultural towns near the border have reportedly suffered disruptions and states of alerts over a series of cross-border security incidents following Israeli Defense Forces (IDF) arresting Bassem Saadi Monday night – the leader of Islamic Jihad.

The elderly commander “was seen being dragged by forces and was slightly bitten by a military dog during his arrest,” regional reports detailed. “Despite his old age, he was not brought to the hospital,” Saadi’s family said, after receiving a blow to the head. Following this, tensions soared along the border amid days of protests.

Israel is now vowing to take out Islamic Jihad, commencing with fresh air strikes on Gaza Friday. Defense Minister Benny Gantz toured the the IDF’s Southern Command on Friday morning where he threatened more action to come: “To our enemies, and specifically to the leadership of Hamas and the Palestinian Islamic Jihad, I would like to emphasize: your time is up. The threat [on this region] will be removed one way or another.”

The IDF says it’s dealt with four straight days of Islamic Jihad incursions, after it’s members vowed to avenge Saadi’s brutal arrest and detention. The Israeli military has now declared a “special situation” and an initial reported strike Friday afternoon is expected to continue with further attacks on the strip.

“According to Palestinian reports, the attacks are in the Rimal neighborhood in Gaza, in a tower known as the Palestine Tower,” Haaretz reports. “There are reports of smoke coming out of the compound. It is not immediately clear what Israel is targeting.”

Following the direct threats posed by the Palestinian Islamic Jihad in Gaza, the IDF is currently striking in the Gaza Strip.

A special situation has been declared on the Israeli home front. Details to follow.

While during major flare-ups of fighting in Gaza, Hamas and Islamic Jihad typically coordinate on repelling major Israeli incursions, the IDF has thus far focused its denunciations on the latter group – which is smaller and less influential than Hamas, but many say more radical.

The IDF is calling the fresh operation “Operation Dawn” – but it’s as yet unclear how long it will last, which will likely depend on how far things escalate. In the late afternoon hours Israel announced its strikes have taken out at least one important Islamic Jihad commander:

“The IDF struck targets in the northern Gaza Strip, killing a top Islamic Jihad operative on Friday, saying it has begun Operation Breaking Dawn against the Palestinian Islamic Jihad,” The Jerusalem Post reports.

“Several targets in the northern Gaza Strip were hit, with reports of casualties and residents of the Gaza envelope were asked to remain close to shelters should there be any rocket fire.”

BREAKING: White House National Security Council spokesman tells me: We are monitoring developments in Gaza. We urge all sides for calm. We firmly believe that Israel has the right to protect itself

Finally, Israel initiates a pre-emptive attack against terrorists and does not wait for them to attack us. pic.twitter.com/VKnMQi828D

Typically major Israeli strikes on Gaza are announced following some level of rocket fire from the strip, but in this scenario it does look as if Israel is preemptively launching a significant operation, hoping to cut off rocket fire before it starts.

Footage from the base of the apartment block in Beit Hanoun, #Gaza where Saraya Al-Quds Commander Jihad Taysir al-Jabari was reportedly killed, no official comment has been made by the faction themselves however this is being reported as confirmed by multiple outlets. pic.twitter.com/LmlHXV38HD

Israeli communities in the south have been placed on alert amid the risk of inbound rocket fire from Gaza: “The IDF has alerted residents up to 80km from the Gaza Strip, including Tel Aviv, that there is a risk of rocket fire,” the Post noted.