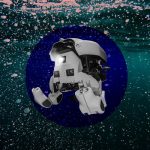 NASA adds a robotics element to its deep space and deep-sea missions.

What distinguishes deep water from deep space? The answer is, “Not much,” for a robot. Both are difficult and demanding conditions, but more crucially, both are remote from the machine’s operator. To reduce expenses for the marine sectors, a team of roboticists from NASA’s Johnson Space Center in Houston decided to use their skills to create a shape-changing underwater robot.

Nic Radford, creator, chairman, president, and CEO of Houston-based Nauticus Robotics Inc., said: “NASA taught us how to bring together solid software autonomy with a powerful hardware architecture and deploy it in a remote context.” Radford worked with Johnson for 14 years, serving in a variety of capacities, including chief engineer and deputy project manager on the Robonaut 2 humanoid robot. The 80-person team he has assembled at Nauticus now includes more than 20 engineers who worked on that project and other NASA robots.

The operator is far away, has limited communication capabilities, and has little awareness of the robot’s surroundings whether the robot is operating in space or on the seafloor, according to Radford. There is no high-speed data network, even if you install one on the space station and operate it from the ground. The space station is more like dial-up when it comes to communication. The robot must thus perceive and comprehend its surroundings to avoid obstacles and manipulate items with the least amount of operator input.

Because of this, Johnson engineers had to create sophisticated hardware for Robonaut 2, including elastic joints, tendon-powered hands, and miniature load cells, as well as vision systems, force sensors, and infrared sensors to gather information. They also had to create software for image recognition, control algorithms, and ultra-high-speed joint controllers to process and act on that information.

NASA and General Motors’ partnership has allowed Robonaut 2, a robot astronaut assistant aboard the International Space Station, to show off its powers (GM). It served as a test site for all of this cutting-edge robotic technology, though. In advance of the arrival of human astronauts, NASA intends to create robots that can do hazardous tasks in space, launch “precursor missions,” and keep up with infrastructure like the proposed lunar Gateway station when people aren’t available. On the other hand, GM was eager to look into robots that may help workers in the manufacturing sector. Over 50 patents were generated by the initiative, some of which have already been implemented into a robotic glove used in the workplace by GM and other companies.

Deep-sea robots may link to operators through a cable, allowing for tight control and high-speed data transfer, unlike a robot in space. But according to Radford, this costs roughly $100,000 and generates 70 metric tonnes of greenhouse gas emissions every day to staff and run an enormous support vessel on the surface. By allowing its robots to operate with little oversight from a command center on a faraway coast, Nauticus is cutting that cord.

The company’s emblematic robot, Aquanaut, is bright orange, entirely electric, and roughly the size of a sports car. As it travels to its destination, Aquanaut resembles a propeller-driven torpedo. When that happens, the nose swings upward to reveal a collection of cameras and other sensors that are now facing the front, and its shell snaps open. Two arms extend in a swing, terminating in claw hands that may hold a variety of implements. To test the robot in 2019, the team went back to Johnson and made use of the Neutral Buoyancy Lab’s enormous astronaut training pool. Here, the robot could test out its systems in front of operators and cameras.

Radford emphasized that a subsea robot is capable of doing a variety of duties and that Aquanaut is made to be adaptable. Offshore oil and gas production is a clear target due to the enormous amount of underwater equipment that requires inspection and maintenance. Wind energy, however, is the ocean’s fastest-growing industry. According to Radford, there are plans to run some 25,000 offshore wind turbines by 2030; each one will require upkeep and inspection.

Aquaculture, or the production of fish, shrimp, and other seafood, is expanding quickly in response to the sharp decline in wild fish populations. According to Radford, the nets and cages in these underwater farms require routine cleaning and inspection.

Port management, maintaining underwater communication lines, offshore mining for rare minerals, and defense uses are further prospective careers. About $2.5 trillion was Radford’s estimate for the marine sector as a whole.

Nauticus intended to create 20 additional Aquanauts over the next three years after producing two at the beginning of 2022. Instead of selling them, the corporation would mostly use them to deliver inexpensive services. Nauticus is developing a vessel dubbed Hydronaut that can be remotely controlled or can travel by itself for activities that call for surface help.

Radford wants the Nauticus moniker to be synonymous with ocean robotics by using space technologies to address marine issues. Space is great because it feels existential; it is far away, and people want to investigate it. However, there are a lot of genuine problems right here in the water, and we need to innovate more in the “blue economy.”

Technology transfer from NASA to the business sector has a lengthy history. To show the wider advantages of America’s commitment to its space program, the agency’s Spinoff magazine showcases NASA technology that has evolved into commercial goods and services. The spinoff is a journal produced by NASA’s Space Technology Mission Directorate’s Technology Transfer program (STMD).

The post From Deep Space to The Deep Sea, NASA Takes a Robotics Twist appeared first on .