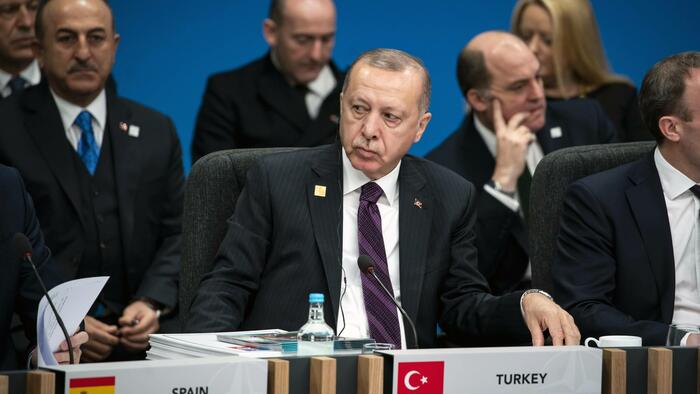 While last month Turkey lifted its objection to the two countries joining the alliance, after blocking the initial application process over charges they support outlawed Kurdish “terrorist” groups, Erdogan’s interpretation of the trilateral deal stipulating Turkey’s requirements for both countries is that it can be rescinded at any time, apparently.

Erdogan said Monday in televised remarks following a cabinet meeting, “I would like to remind once again that if these countries do not take the necessary steps to fulfill our conditions, we will freeze the (accession) process.” He emphasized, “Our stance on this issue is very clear. The rest is up to them.”

This suggests that perhaps already Helsinki and Stockholm aren’t moving fast enough on their agreement to “crack down on PKK activities” and extradite individuals “wanted” by Turkey.

Given that the entirety of the NATO accession process can take at the very least multiple months if not stretching into years – and given all 30 member states must approve – Turkey seems willing to keep up its pressure and leverage over the West and the two Nordic countries in particular in order to extract what it wants. Erdogan is not only holding Turkey’s veto power over NATO, but is interpreting it as indefinite.

The Associated Press cites Erdogan’s words as saying Sweden in particular is already of to a bad start on fulfilling its agreements with Turkey:

Erdogan said that Sweden in particular was not “projecting a good image,” but didn’t elaborate. There was no immediate reaction from Sweden and Finland to Erdogan’s comments.

Turkey accuses the two countries of being too lenient toward groups it considers to be national security threats. Turkey’s justice minister said earlier this month that the government had renewed requests for the extradition of terror suspects wanted by his country.

In late June at the NATO Madrid conference when Erdogan had an apparent ‘change of mind’ following Sweden and Finland agreeing (at least on paper) to Turkey’s list of security demands, the Biden administration statement called Turkey’s switch “powerful shot in the arm” among allies. However, given Erdogan’s latest comments – and known history of being the wayward alliance member “playing” allies in order to get his way – Brussels and Washington could be in for a long, drawn-out headache as they’ve previously expressed a desire to fast-track Sweden and Finland.