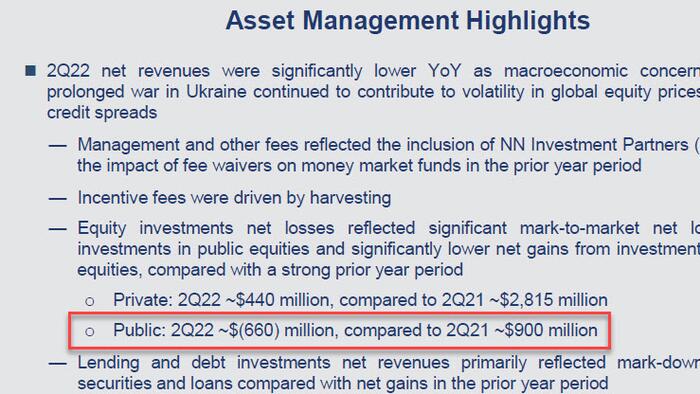 
While most analysts and traders were digging through Goldman’s stronger than expected Q2 earnings report which beat on revenue despite a nearly 50% plunge in profits and another quarter of dismal investment banking, but redeemed itself with stellar FICC numbers…

… which sent Goldman stock higher, for the fourth quarter in a row there was troubling disclosure in the bank’s Asset Management division (which overlaps with the verbotten Goldman Prop, which does but doesn’t really exist since banks still aren’t technically allowed to have prop trading post Volcker). Here, after a very disappointing Q3 2021, which saw a $820 million loss from the trade of public equities…

… In Q2 we have seen a continuation of this bizarre equity investment underperformance, with the bank reporting that net revenues in “Asset Management” cratered to just $1.084 billion, down 79% from $5.132 billion a year ago, a collapse the bank summarized hilariously in the following chart which is the epitome of chart crime (just look at the Y-axis for a few seconds to figure out what Goldman tried to pull here).

According to Goldman’s investor presentation, for the fourth quarter in a row, “equity investments net losses reflected significant mark-to-market net losses from investments in public equities.”

Goldman further breaks down the equity revenue, and notes that whereas investments in private equity brought in a modest $440 in Q3, down bigly from the massive $2.815 billion profit a year ago, public equities actually led to a $660 million loss in Q2, the fourth consecutive loss in a row!

Add across the past four quarter and you get a staggering $2.6 billion in public equity losses! Surely someone on the Goldman call will ask the bank’s resident DJ (and occasional CEO) how the world’s most powerful trading floor has been unable to make money trading and investing in equities in the past 4 quarters:

Don’t feel too bad looking at your P&L: Goldman, the world’s most powerful bank, lost another $660 million in Q2 trading stonks (after losing over a bill in Q4 and Q1)

But if they don’t ask about how Goldman lost almost three billion dollars investing stocks in the past four quarters, surely someone will ask why the bank keeps dumping stocks, pardon “harvesting” gains, hand over fist. After all, this is also the fifth quarter in a row this has taken place.

Recall, one year ago we reported that “Goldman Has “Aggressively” And Quietly Liquidated A Quarter Of Its Equity Investments” showing that “having started the year with a $20BN equity portfolio which has enjoyed a $5BN increase in market prices, Goldman dumped a whopping $5.5 billion of its equity assets so far (excluding a modest $1.5BN in purchases) or more than a quarter of its entire portfolio as of Dec 31. “

Then, three quarters ago the infamous “Harvesting” slide was back if with some adjustments. First, Goldman no longer used YE20 as the starting point for its asset sales bridge, and instead has picked YE19 as the starting reference. Back then the bank had some $22 billion in equity investments, $2BN more than the $20BN at YE 20. What we also found is that unlike Q2, when the bank showed it has sold a whopping $5.5BN in stocks in the first half of 2021 (excluding a modest $1.5BN in purchases), this time the bank went even bolder and sold a total of $16 Billion (presumably split between equities and debt, although whoever did the chart forgot to add the table). This number was offset by $5 billion in equity additions, for a total Net Dispositions amount of $11 billion, or “harvesting” since the bank’s 2020 Investor Day.

Two quarters ago, the “Harvesting Progress” slide again made an appearance and show that the bank sold an additional $2BN gross in Q4 (the dispositions number since YE19 rose from $16BN to $18BN), offset by an incremental $1BN in purchases ($6BN in Q4, up from $5BN in Q3). In other words, all else equal (and as the slides above and below show that’s more or less the case), Goldman liquidated, pardon “harvested” an additional gross $2BN in Q4 offset by $1 billion in the bank’s equity portfolio, for a total Net Dispositions amount of $12 billion, or “harvesting” since the bank’s 2020 Investor Day (up from $11 billion last quarter).

Last quarter too the “Harvesting Progress” slide present, shows that the bank continued to sell even more stock, and in the first quarter, sold an additional $1BN gross (the dispositions number rose from $18BN to $19BN), offset by an incremental $1BN in purchases ($7BN in Q1, up from $6BN in Q4). Said otherwise, Goldman liquidated an additional gross $1BN in Q1, offset by $1BN in additions, for a new and improved “net dispositions” of $12 billion however due to the broader decline in the market, the mark ups since Year End 2019 declined from $9BN to $8BN, and a net notional of $18 billion in equity investments at the end of Q1 2022.

So fast forward to today, when we got another dose of Goldman’s “Harvesting Progress”, which confirmed that yes, the bank sold even more stock in Q2, with net dispositions rising by another $1 billion gross to $20 billion gross, with the difference that unlike in Q2, this time there were no additions, meaning the net dispositions since 2020 are now $13 billion. And finally, with mark ups (i.e., mark-to-market) dropping by another $1 billion, the total value of equity investments at the end of Q2 dropped to just $16 billion, down from $18 billion at the end of Q1, 2022, $19 billion the quarter before that, $20 billion the quarter before that and so on.

Who is Goldman selling to? Anyone who will buy, really but here we would wager that retail investors – who were on tilt buying in 2021 and who have continued to buy, albeit at a far more muted pace in 2022 – have been the proud recipients of billions in Goldman sales, especially those reading the permabullish notes from Goldman’s chief equity strategist David Kostin who still refuses to make a recession his base case. This, in the financial literature is called the “distribution phase” or was until Kostin had no choice but to trim his year-end S&P price target from 5,100 to 4,900, then to 4,700, and finally again to 4,400 (while at least admitting that in a recession stocks will collapse to 3,150).

And so, with the investor call now over, unfortunately there was again no discussion of the bank’s asset sales, pardon “harvesting” for the fourth quarter in a row. At least one year ago some analyst had the gall to ask a question about Goldman’s efforts to reduce its equity investment portfolio, to which the bank said that it it has “made progress on improving its capital efficiency and is moving ‘aggressively’ to manage equity positions, especially since the environment is supportive.”

What does all of the above mean in English? Simple: in Q2, Goldman continued to “aggressively” dump its equity positions which are in the money in an environment that is “supportive”, i.e., in which the dumb money is providing a constant bid into which whales such as Goldman can sell.

The last time Goldman was “aggressively” selling into a “supportive” market? Well, we have to go back all the way to 2007 and 2008 when Goldman was busy creating the very CDOs which its prop desk would then “aggressively” short. We all remember how prophetic that particular move turned out to be.

And yes, no wonder that even Goldman is slowing hiring to replace traders who leave, and is bringing back annual performance reviews by year end to fire the “bottom 10%” a practice the bank suspended during the pandemic out of solidarity for bankers who only make a lowly $300,000 on average.