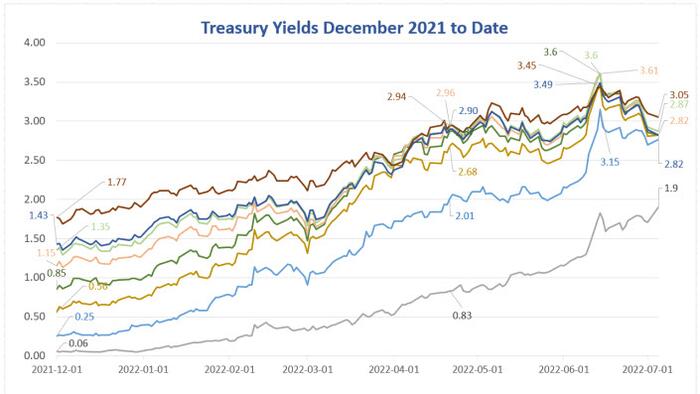 There’s a big rally at the middle and long end of the treasury curve. How long can it last?

US Treasury Yields from New York Fed, chart by Mish

Treasury Yields May 25 to July 5

That’s quite the rally on the middle to long end of the curve.

The much watched, indeed over-watched 2-10 spread inverted again today. The Fed data download has the spread at zero.

Inversion of the 2-10 bond yields is considered an advance recession warning but what’s the point now? We are in recession.

I saw an interesting viewpoint on Twitter today. I cannot locate the Tweet but it went something like this: “If the Fed hints at pausing, the 10-year yield will crash.”

I believe such thinking is backward.

I suggest the rally at the long end of the curve is because we are in recession yet the Fed has signaled more rate hikes are on the way.

The bond market’s message is that Powell is finally taking inflation seriously. But how long will that last?

Let’s review the key Powell statements from June 29 as noted in Powell: “We understand better how little we understand about inflation”

I strongly disagree with point three except for the labor market. The other points could not possibly be more clear, even if I do not necessary agree.

Powell’s statements translate to damn the recession full speed ahead with hikes.

Based on his comments. I expect the Fed to overshoot.

Q: Is it time to buy 10-year Treasuries?
A: As long as the Fed does not back down on tightening, yes.

Rent rather than buy may be more like it. I suspect we have seen secular lows in the 30-year long bond.

The secular tailwinds of globalization are no longer at the Fed’s back.

Expect a Long But Shallow Recession With Minimal Job Losses

A recession has started, but what will it look like?

What About the Stock Market?

Look at things this way: We have energy shocks, wage pressures, a supply chain mess, earnings estimates that remain ridiculously high, and a Fed that is likely to overshoot. Don’t expect the Fed to come to the rescue.

Finally, we have an inept president pushing unions and promoting clean energy policies that are very inflationary.

Even if the recession isn’t long, this is a very nasty brew. The economy rates to be weak, perhaps flirting with recession for a long time.

So expect a disaster in the stock market. We are not close to the bottom.