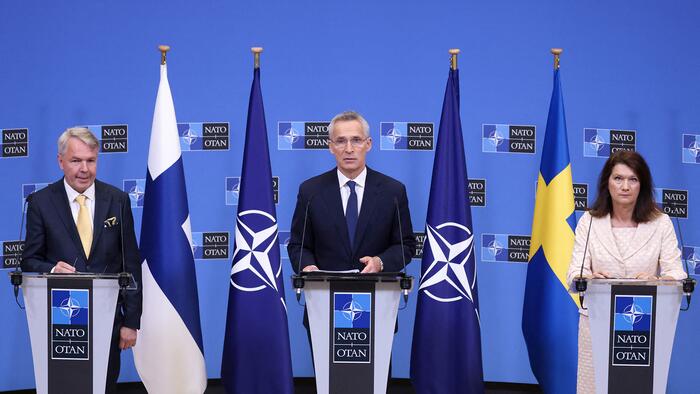 
Tuesday was hailed as a “historic day” as NATO chief Jens Stoltenberg oversaw members of the military alliance formally signing the protocols of accession related to Sweden and Finland’s bids. “This is a good day for Finland and Sweden, and a good day for NATO. With 32 nations around the table, we will be even stronger and our people will be even safer, as we face the biggest security crisis in decades,” he said.

“Russia has shattered peace in Europe so it’s important we stand together at this important time,” Stoltenberg declared further. However, a mere week after finally agreeing to the Scandinavian countries’ joining, Turkey is threatening to block the expansion if they don’t follow through on extraditing people the Turkish government sees as terrorists.

The expansion requires ratification by parliaments and governments of each of the alliance’s 30 member nations in order to continue. Stoltenberg said in his remarks that NATO’s door is open for those democracies which stand “ready and willing to contribute to our shared security.”

After signing a joint memorandum paving the way for expansion last week at the NATO summit in Madrid, Turkish President Recep Tayyip Erdogan said that Sweden committed to extraditing 73 “terrorists” linked to the Kurdistan Workers Party (PKK), which is a designated terror group also under the US, UK, and EU.

According to the BBC, Sweden “had already sent three or four of them. Pro-government Turkish daily Hurriyet published a list of 45 people, including 33 sought from Sweden and 12 from Finland.”

Others on the list include members of the Gulen movement, or what Turkey sees as the Fethullah Terrorist Organization – a global Turkish opposition network which has set up schools in the West. BBC details of one Gulen-associated journalist now wanted by Turkey, Bulent Kenes:

For years, he was editor-in-chief of Today’s Zaman, a major English-language daily in Turkey, before it was shut down in 2016. Now, he lives in exile in Stockholm.

…Mr Kenes said he became a target for his outspoken criticism of President Erdogan and faced accusations of plotting to topple the government: “All the allegations are fabricated. I am an independent journalist with no affiliations with any organization.”

Kenes fled Turkey and went to Stockholm after being accused and convicted of “insulting the president” in 2015, in a case which underscored the Erdogan government’s increasing crackdown on anti-Erdogan speech.

It will be interesting to see if Sweden in particular, which is home to many Turkish and Syrian Kurds, moves legally against individuals Turkey has listed as having terror links, yet who ran afoul of Ankara for mere free speech related issues such as criticism of Erdogan personally.