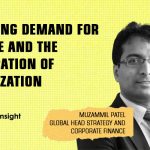 The future of digitalization is firmly anchored in the strides being made today in no-code technology.

Digital has been at the forefront of every transformation initiative from governance to startup ideas. The need for an app for everything has driven the demand for coders, solution architects, and in general technology skill sets through the roof. As the supply of quality technology skill sets has tightened, no-code platforms have provided a neat balance to the demand-supply imbalance. No-code platforms have increasingly become the go-to option for building applications quickly, at a lower effective cost, and more importantly with virtually no dependence on coding skillsets. The future of digitalization is firmly anchored in the strides being made today in no-code technology.

Why has the demand for no-code platforms accelerated?

No-code platforms provide end-users with the ability to quickly build apps in exactly the way they imagine them, without relying on coders. This significantly reduces any loss in translation from the idea to the outcome. The tightening supply of coding skillsets has further contributed to end-users seeking out no-code platforms to develop their applications. No-code also promises to dramatically reduce the time taken and the cost of ownership and management of applications. In general, the ability to build apps quickly and without any additional skillsets has led to the increasing adoption of no-code platforms and a massive increase in the pace of digitalization.

Do no-code platforms really live up to the hype?

No-code is still at an evolving stage. The technologies in play and the frameworks in place are still evolving. There still doesn’t exist a standard for what qualifies as a truly no-code platform. However, no-code definitely lives up to the hype and keeps improving every day. No-code platforms still have some way to go to start replacing core systems and in general, become the only way applications are built. However, we are very much on the path to a world where coding will be required only to build and enhance the no-code platforms themselves.

What is the future of no-code technology?

No-code technology is expected to become increasingly user-friendly and driven by natural language commands. The future of new code will involve apps being built through conversations between humans and machines. No-code is also expected to become increasingly adaptive and intelligent when coupled with artificial intelligence. Where today artificial intelligence is used to undertake specific tasks, it is expected to become an integral part of no-code platforms to build or enhance applications without specific human intervention. We are likely to see no-code become an autonomous technology.

How should businesses benefit from this wave?

For businesses today, no-code is no longer an option. It is the only way to sustain the insatiable need for digitalization. Businesses have to invest in adopting no-code technology and in training and re-organizing the workforce to deliver applications at a rapid pace. Given that no-code technology is still evolving, businesses will have to adapt quickly to developments and work with multiple platforms until a market standard evolves. Businesses that ignore the no-code wave are likely to spend huge amounts on digitalization compared to their peers and are likely to get left behind. It is also imperative for businesses to take this opportunity to rationalize technology teams, refocus their spending on customer needs, and set more aggressive targets for the pace of digitalization.

How large is the no-code opportunity?

India’s no-code market is estimated at USD 400 million. As per Gartner, the no-code market globally is expected to grow at more than 20%. The no-code opportunity is expected to create an ecosystem far beyond the realm of just the platform. It will accelerate the creation and monetization of applications. It will create a large market for business analysts and application maintenance and monitoring beyond the traditional market. No-code is also expected to accelerate the adoption of cloud technologies and in general cloud consumption. The no-code opportunity is likely to create a new ecosystem of citizen developers, content creators, creators of reusable artefacts, app monetizers, and consumers that will create a digitalization wave not seen before.

The post The Rising Demand for No-Code and the Acceleration of Digitalization appeared first on .