The euro was hit hard yesterday during the ECB’s Sintra Forum panel discussion which included Fed Chair Jerome Powell, the BoE’s Governor Bailey, General Manager Augustin Carstens and the ECB President Christine Lagarde. While the Fed “out-hawked’ the rest but it was consensus that inflation remains key for all central banks at this point and that inducing a recession is a far lesser risk that wages spiraling out of control.

From a eurozone perspective, we received no clarity around anti-fragmentation particularly after yesterdays soaring Spanish inflation release which highlighted the tricky task the ECB has to navigate inflation concerns as well as rising peripheral bond spreads. This ‘kicking the can down the road’ approach was not received well by markets and even took off roughly 23bps off the year-end rate hike figure that was priced in only a day ago.

The economic calendar highlights the U.S. core PCE release later today which is traditionally the Fed’s preferred measure of gauging inflation. Forecasted figures are expected to be marginally lower. A miss may well give the euro some reprieve ahead of President Christine Lagarde’s speech shortly after. 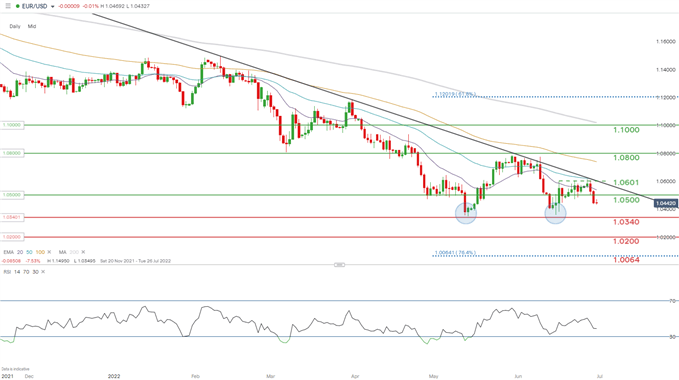 Price action on thedaily EUR/USD chart shows bears extending yesterdays downside this morning. I think we may find support around 1.0400/1.0340 before a possible turnaround. This being said, if the ECB continues on it’s cautious path the euro could definitely weaken further against the greenback.

IGCS shows retail traders are currently LONG on EUR/USD, with 69% of traders currently holding long positions (as of this writing). At DailyFX we typically take a contrarian view to crowd sentiment resulting in a short-term downside bias.