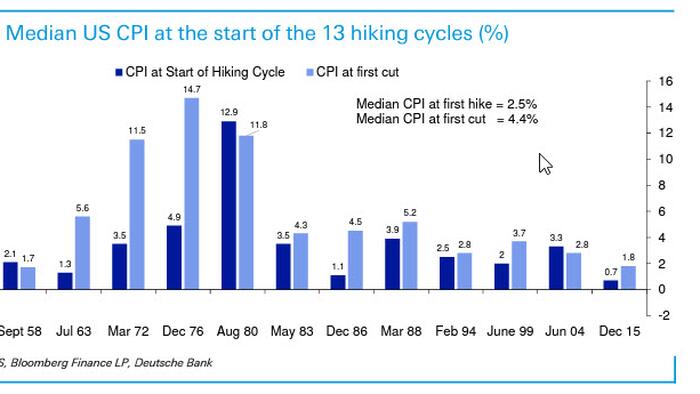 
Even Deutsche Bank’s Jim Reid admits that he was “slightly surprised” at the results revealed by the following chart, lifted from his latest slidebook (available to professional subs).

It shows what the median US CPI was at the start of the 13 hiking cycles in the last 70 years and also where it was at the first cut after these hiking cycles. Three things stand out from this and the table you can see in the chart book.

That, as Reid says, is the history, and it made Reid appreciate that cuts could come in this cycle when inflation is still high whether this would be a policy mistake or not. Where this cycle is so different though is that the first hike occurred very, very late in the inflation cycle. Whether this changes the dynamic, time will tell.

For what it’s worth, Reid’s base case remains that the Fed will find it very difficult to ease policy notably given that inflation is going to be harder to dislodge.