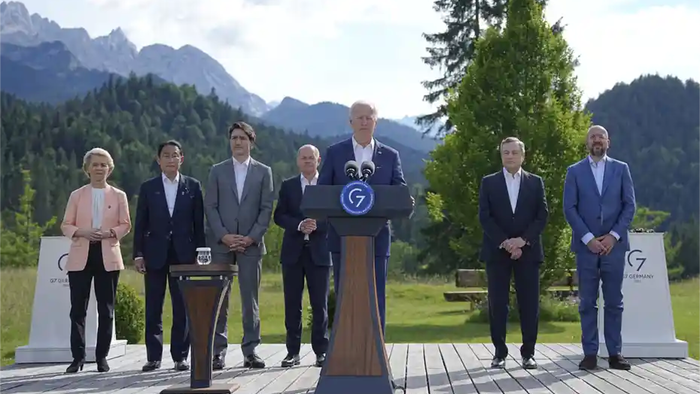 G-7 leaders from the US, Canada, Germany, Italy, Japan, and the European Union gathered at a summit in Bavaria, Germany, on Sunday and unveiled the Partnership for Global Infrastructure and Investment (PGII) that will “will deliver game-changing projects to close the infrastructure gap in developing countries, strengthen the global economy and supply chains, and advance U.S. national security,” a White House press release read.

During the summit, Biden said the U.S. would deploy $200bln in grants, federal funds, and private investment over five years for lower- and middle-income nations to boost infrastructure.

“I want to be clear. This isn’t aid or charity. It’s an investment that will deliver returns for everyone,” Biden said. He added that it would allow countries to “see the concrete benefits of partnering with democracies.”

Europe pledged $316bln over the next five years for PGII, while Japan committed $65bln.

“It’ll boost all of our economies, and it’s a chance for us to share our positive vision for the future and let communities around the world see for themselves the concrete benefits of partnering with democracies,” the president said.

China’s Belt and Road Initiative scheme was launched in 2013 and is the centerpiece of Chinese President Xi Jinping’s foreign. Also known as the “21st Century Maritime Silk Road,” China’s infrastructure initiative has projects in more than 100 countries in an attempt to resurrect ancient trade routes from Asia to Europe.

Since its launch, Western officials have accused Beijing of pursuing “debt-trap diplomacy“ by providing countries with financing to build infrastructure that benefits China more than the countries themselves.