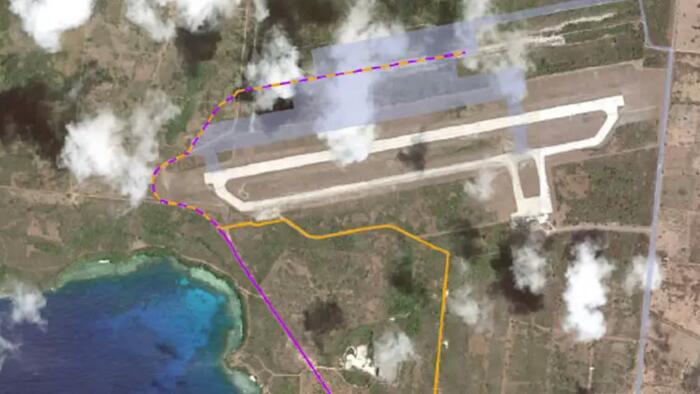 Satellite imagery revealed that the United States is constructing a new military facility in the Pacific, possibly preparing an alternative landing site for its airforce should the military bases on Guam become inoperable.

Land-clearing activity has been spotted at Tinian International Airport in the Northern Mariana Islands, based on satellite images obtained by The War Zone on June 15.

An annotated satellite image showing the full scope of planned construction as part of the Tinian Divert Airfield project. USAF

Past satellite imagery from the Planet Lab suggests that construction work at the site started in May.

This appears to correspond to the Tinian divert airfield projects that commenced in February, which will cost about $162 million and are expected to complete by 2025.

At the first project’s ground-breaking ceremony in February, brigadier-general Jeremy Sloane, commander of the 36th Wing, emphasized the importance of the Tinian divert airfield projects for the U.S. forces.

In May 2019, the Commonwealth of Northern Mariana Islands government signed a 40-year lease agreement with the U.S. Defense Department, which was worth $21.9 million for the U.S. Air Force’s divert airfield on Tinian.

This was consistent with the U.S. Air Force’s decision in 2016 to designate Tinian International Airport as a backup site if the Andersen Air Force Base in Guam becomes unavailable due to a natural disaster or enemy attack.

The divert airfield project would also include the construction of fuel storage, maintenance facility, and other infrastructure on Tinian to support cargo and tanker aircraft, and training exercises.

US Upgrading Military Bases in Guam to Counter China

The Pentagon said in its global defense review last year that Washington will be focusing on the upgrade and expansion of military bases in Guam and Australia “to deter potential Chinese military aggression and threats from North Korea.”

Mara Karlin, deputy assistant secretary for policy at the U.S. Department of Defense, said the Indo–Pacific region was marked as the focal point for the U.S. military in the review, in which it “directs additional cooperation with allies and partners across the region.”

“More broadly across the Indo–Pacific, you’ll see a range of infrastructure improvements in Guam, the Commonwealth of the Northern Mariana Islands, and Australia.”

The review was commissioned by the Biden administration in February 2021, and while it provided some details of the future of the military’s global posture, the review was largely classified.