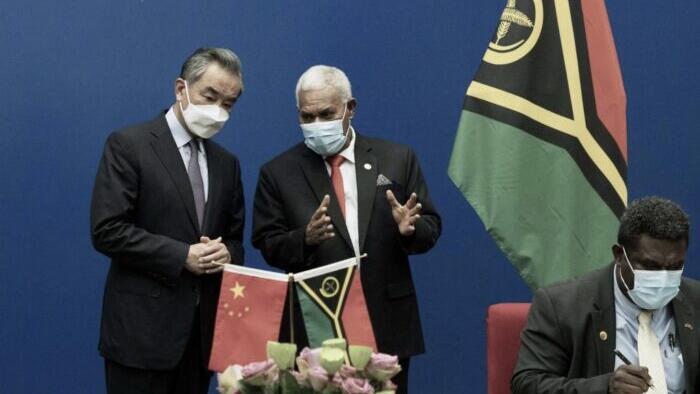 
Authored by Daniel Teng via The Epoch Times,

Democratic countries are proposing a new Pacific-wide pact to strengthen cooperation and development efforts in the region to combat Beijing’s influence building and hybrid warfare operations.

The “Partners in the Blue Pacific” would involve the United States, Australia, France, Japan, New Zealand, and the United Kingdom to provide “closer, more purposeful, and more ambitious cooperation.”

“Too often, our efforts have been uncoordinated, creating duplication in some cases and gaps on the others,” according to a concept note about the pact. The partnership was earmarked by U.S. Indo-Pacific coordinator Kurt Campbell at a Center for Strategic and International Studies meeting on June 23.

The program would look at strengthening the Pacific Islands Forum, facilitate regular engagement and dialogue between partners, and map existing projects and coordinate future ones to avoid “lost opportunities.”

The development of the Partners in the Blue Pacific will come in close consultation with Pacific leaders and will target areas such as climate change, maritime security (China’s illegal fishing fleet), health, education, and providing better access to infrastructure.

Working Together to Deal with the ‘Grey Zone’

South Pacific expert Cleo Paskal has called for better coordination and for democratic nations to leverage each other’s strengths to deal with Beijing’s unrestricted or grey zone warfare in the region.

“Each of the Quad [Australia, India, Japan, and the United States] members have their own unique track records and capabilities to contribute,” she wrote in The Australian newspaper along with Anthony Bergin of the Australian Strategic Policy Institute.

“France is [also] a key Pacific player with nearly 3,000 defence personnel in the region. We need to get our relationship back on track for that reason alone.”

The South Pacific has become a hotbed of geopolitical competition as the Chinese Communist Party pushes to win influence over Pacific leaders in the region.

Chinese Foreign Minister Wang Yi’s recent tour to eight nations in the region exemplified this trend, with the minister signing a swathe of new bilateral deals to tighten cooperation.

Paskal warned that the increasing influence of Beijing also saw the weakening of democratic institutions and the gradual rise of authoritarianism.

“That process of creating instability and fragmentation can be described as creating a state of ‘entropy’—of political, social, and economic entropy—where things start to just break down. And in that state of disorder, China can create a new order with itself and its proxies at the centre.”

A key example is the signing of the security deal between Solomon Islands Prime Minister Manasseh Sogavare and Beijing, which could pave the way for the Chinese People’s Liberation Army Navy to station troops, weapons, and naval ships in the region.

Sogavare’s prime ministership has not been without controversy. One report revealed that 39 of 50 pro-Beijing members of Parliament received payments from the National Development Fund operated in conjunction with the Chinese Embassy.

While opposition leader Matthew Wale accused the prime minister of not delivering basic services, over-centralising power, and exploiting the country’s timber industry for the benefit of a few logging companies and to line his own pockets.

Late last year, local anger erupted, and protests were held in the capital Honiara against Prime Minister Sogavare, which resulted in three deaths and the Chinatown district being razed.

“You start to get this distortion in the society that creates an enormous amount of social anger. If you are from a democratic background, you think that’s a bad thing,” Paskal said. “But if you accept this premise of entropic warfare being the desired outcome from Beijing, you actually do want to create disruption within the society.”