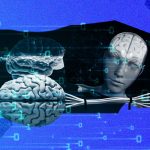 In December 2021, Melbourne-based Cortical Labs grew groups of neurons (brain cells) that were incorporated into a computer chip. The resulting hybrid chip works because both brains and neurons share a common language: electricity. In silicon computers, electrical signals travel along metal wires that link different components together. In brains, neurons communicate with each other using electric signals across synapses (junctions between nerve cells). In Cortical Labs’ Dishbrain system, neurons are grown on silicon chips. These neurons act as the wires in the system, connecting different components. The major advantage of this approach is that the neurons can change their shape, grow, replicate, or die in response to the demands of the system. Dishbrain could learn to play the arcade game Pong faster than conventional AI systems. The developers of Dishbrain said: “Nothing like this has ever existed before, it is an entirely new mode of being. A fusion of silicon and neuron.”

Cortical Labs believes its hybrid chips could be the key to the kinds of complex reasoning that today’s computers and AI cannot produce. Another start-up making computers from lab-grown neurons, Koniku, believes its technology will revolutionize several industries including agriculture, healthcare, military technology, and airport security. Other types of organic computers are also in the early stages of development. While silicon computers transformed society, they are still outmatched by the brains of most animals. For example, a cat’s brain contains 1,000 times more data storage than an average iPad and can use this information a million times faster. The human brain, with its trillion neural connections, is capable of making 15 quintillion operations per second.

This can only be matched today by massive supercomputers using vast amounts of energy. The human brain only uses about 20 watts of energy or about the same as it takes to power a lightbulb. It would take 34 coal-powered plants generating 500 megawatts per hour to store the same amount of data contained in one human brain in modern data storage centers. Companies do not need brain tissue samples from donors, but can simply grow the neurons they need in the lab from ordinary skin cells using stem cell technologies. Scientists can engineer cells from blood samples or skin biopsies into a type of stem cell that can then become any cell type in the human body.

People will no doubt be much more willing to donate skin cells for research than their brain tissue. One of the barriers to brain donation is that the brain is seen as linked to your identity. But in a world where we can grow mini-brains from virtually any cell type, does it make sense to draw this type of distinction? If neural computers become common, we will grapple with other tissue donation issues. In Cortical Lab’s research with Dishbrain, they found human neurons were faster at learning than neurons from mice. Might there also be differences in performance depending on whose neurons are used? Might Apple and Google be able to make lightning-fast computers using neurons from our best and brightest today? Would someone be able to secure tissues from deceased geniuses like Albert Einstein to make specialized limited-edition neural computers?

Such questions are highly speculative but touch on broader themes of exploitation and compensation. Consider the scandal regarding Henrietta Lacks, an African-American woman whose cells were used extensively in medical and commercial research without her knowledge and consent.

Henrietta’s cells are still used in applications that generate huge amounts of revenue for pharmaceutical companies (including recently to develop COVID vaccines. The Lacks family still has not received any compensation. If a donor’s neurons end up being used in products like the imaginary Nyooro, should they be entitled to some of the profit made from those products?

As recently discussed in a study there are no evidence neurons on a dish have any qualitative or conscious experience so cannot be distressed and without pain receptors, cannot feel pain. Neurons have evolved to process information of all kinds – being left completely unstimulated, as currently done all over the world in labs, is not a natural state for a neuron. All this work does is allow neurons to behave as nature intended at their most basic level. Humans have used animals to do physical labor for thousands of years, despite often leading to negative experiences for the animals. Would using organic computers for cognitive labor be any more ethically problematic than using an ox to pull a cart? We are in the early stages of neural computing and have time to think through these issues. We must do so before products like the “Nyooro” move from science fiction to the shops.