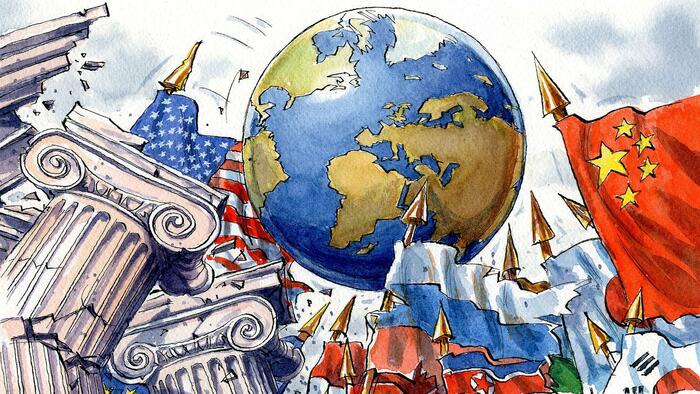 The future world order, already in progress, will be formed by strong sovereign states. The ship has sailed. There’s no turning back.

Let’s cut to the chase and roll in the Putin Top Ten of the New Era, announced by the Russian President live at the St. Petersburg forum  for both the Global North and South.

The era of the unipolar world is over.

The rupture with the West is irreversible and definitive. No pressure from the West will change it.

Russia has renewed with its sovereignty. Reinforcement of political and economic sovereignty is an absolute priority.

The EU has completely lost its political sovereignty. The current crisis shows the EU is not ready to play the role of an independent, sovereign actor. It’s just en ensemble of American vassals deprived of any politico-military sovereignty.

Sovereignty cannot be partial. Either you’re a sovereign or a colony.

Hunger in the poorest nations will be on the conscience of the West and euro-democracy.

Russia will supply grains to the poorer nations in Africa and the Middle East.

Russia will invest in internal economic development and reorientation of trade towards nations independent of the U.S.

The future world order, already in progress, will be formed by strong sovereign states.

The ship has sailed. There’s no turning back.

How does it feel, for the collective West, to be caught in such a crossfire hurricane? Well, it gets more devastating when we add to the new roadmap the latest on the energy front.

Rosneft CEO Igor Sechin, in St. Petersburg, stressed that the global economic crisis is gaining momentum not because of sanctions, but exacerbated by them; Europe “commits energy suicide” by sanctioning Russia; sanctions against Russia have done away with the much lauded “green transition”, as that is no longer needed to manipulate markets; and Russia, with its vast energy potential, “is the Noah’s Ark of the world economy.”

For his part Gazprom CEO Alexey Miller could not be more scathing on the sharp decline in the gas flow to the EU due to Siemens’ refusal and/or incapacity to repair the Nord Stream 1 pumping engine: “Well, of course, Gazprom was forced to reduce the volume of gas supplies to Europe by 20%+. But you know, prices have increased not by 20%+, but by several times! Therefore, I’m sorry if I say that we don’t feel offended by anyone, we are not particularly concerned by this situation.”

If this pain dial overdrive was not enough to hurl the collective West – or NATOstan – into Terminal Hysteria, then Putin’s sharp comment on possibly allowing Mr. Sarmat to present his business card to “decision-making centers in Kiev”, those that are ordering the current shelling and killing of civilians in Donetsk, definitely did the trick:

“As for the red lines, let me keep them to myself, because this will mean quite tough actions on the decision-making centers. But this is an area that shouldn’t be disclosed to people outside the military-political leadership of the country. Those who deserve appropriate actions on our part should draw a conclusion for themselves – what they may face if they cross the line.”

Alastair Crooke has masterfully outlined  how the collective West’s zugzwang leaves it lumbering around, dazed and confused. Now let’s examine the state of play on the opposite side of the chessboard, focusing on the BRICS summit this Thursday in Beijing.

As much as the Belt and Road Initiative (BRI), the Shanghai Cooperation Organization (SCO), the Eurasia Economic Union (EAEU) and ASEAN, now it’s time for a reinvigorated BRICS to step up its game. In conjunction, these are the key organizations/instruments that will be carving the pathways towards the post-unipolar era.

Both China and India (which between them were the largest economies in the world for centuries before the brief Western colonial interregnum) are already close and getting closer to “the Noah’s Ark of the world economy”.

The G20 – hostages of the Michael Hudson-defined FIRE scam that is the core of the financialized neoliberal casino – is slowly fading away, while a potential new G8 ramps up: and that is directly connected to BRICS expansion, one of the key themes of this week’s summit. An expanded BRICS with a parallel G8 configuration is bound to easily overtake the Western-centric one in importance as well as GDP by purchasing power parity (PPP).

BRICS in 2021 already added Bangladesh, Egypt, the UAE and Uruguay to its New Development Bank (NDB). In May, at Foreign Ministry-level debates, Argentina, Egypt, Indonesia, Kazakhstan, Nigeria, the UAE, Saudi Arabia, Senegal and Thailand were added to the 5 BRICS members. Leaders of some of these nations will be connected to the Beijing summit.

BRICS plays a completely different game from the G20. They aim for the grassroots, and it’s all about slowly “building trust” – a very Chinese concept. They are creating an independent Credit Rating Agency – away from the Anglo-American racket – and deepening a Currency Reserves Arrangement. The NDB – including its regional offices in India and South Africa – has been involved in hundreds of projects. Time will tell: one day the NDB will make the World Bank superfluous.

Comparisons between BRICS and the Quad, a U.S. concoction, are silly. Quad is just another crude mechanism to contain China. Yet there’s no question India treads on tightrope walker territory, as it’s a member of both BRICS and Quad, and made a vastly misguided decision to walk out of the Regional Comprehensive Economic Partnership (RCEP) – the largest free trade deal on the planet – opting instead to adhere to the American pie-in-the-sky Indo-Pacific Economic Framework (IPEF).

Yet India, long term, skillfully guided by Russia, is being steered to find essential common ground with China in several key issues.

BRICS, especially in its expanded BRICS+ version, is bound to increase cooperation on building truly stable supply chains, and a settlement mechanism for resources and raw material trade, which inevitably has to be based in local currencies. Then the path will be open for the Holy Grail: a BRICS payment system as a credible alternative to the weaponized U.S. dollar and SWIFT.

Meanwhile, a torrent of bilateral investments from both China and India in the manufacturing and services sector around their neighbors is bound to lift up smaller players in both Southeast Asia and South Asia: think Cambodia and Bangladesh as important cogs in a vast supply wheel.

Yaroslav Lissovolik had already proposed a BEAMS concept as the core of this BRICS integration drive, uniting “the key regional integration initiatives of BRICS economies such as BIMSTEC, EAEU, the ASEAN-China free trade agreement, Mercosur and SADC/SACU.”

Now Beijing seems eager to promote “an inclusive format for dialogue spanning all the main regions of the Global South via aggregating the regional integration platforms in Eurasia, Africa and Latin America. Going forward this format may be further expanded to include other regional integration blocks from Eurasia, such as the GCC, EAEU and others.”

Lissovolik notes how the ideal path from now on should be “the greater inclusivity of BRICS via the BRICS+ framework that allows smaller economies that are the regional partners of BRICS to have a say in the new global governance framework.”

Before he addressed the St. Petersburg forum on video, President Xi called Putin personally to say, among other things, that he’s got China’s back on all “sovereignty and security” themes. They also, inevitably, discussed the relevance of BRICS as a key platform towards the multipolar world.

Meanwhile, the collective West plunges deeper into the maelstrom. A massive national demonstration of trade unions this past Monday paralyzed Brussels – the capital of the EU and NATO – as 80,000 people expressed their anger at the rising and rising cost of living; called for elites to “spend money on salaries, not on weapons”; and yelled in unison “Stop NATO.”

It’s zugzwang all over again. The EU’s “direct losses”, as Putin stressed, provoked by the sanctions hysteria, “could exceed $400 billion a year”. Russia’s energy earnings have hit record levels. The ruble is at a 7-year high against the euro.

It’s a blast that arguably the most powerful cultural artifact of the entire Cold War – and Western supremacy – era, the perennial Rolling Stones, is currently on tour across a “caught in a crossfire hurricane” EU. On every show they play, for the first time live, one of their early classics: ‘Out of Time’.

Sounds much like a requiem. So let’s all sing, “Baby baby baby / you’re out of time”, as one Vladimir “it’s a gas, gas, gas” Putin and his sidekick Dmitry “Under My Thumb” Medvedev seem to be the guys really getting their rocks off. It’s only (BRICS) rock’n roll, but we like it.