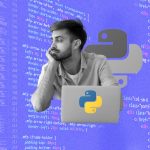 A keyword search over the job recruitment portal would reveal how specific the recruiters are about aspirants having technical skills. Most of the job descriptions would carry a requirement for a certificate in Python programming, or a degree in computer programming, computer science, or a related field. The flexibility they include in the description is meant for people with a similar background but having enough knowledge in the skills mentioned therein. Yes, they are the ever-growing breed of self-taught breed of software developers. Python is one of the most in-demand programming languages, and given the lack of qualified faculty, aspirants are teaching themselves the language to make a killing out of the abundance of job opportunities in the market for python developers. But unfortunately, self-taught python developers generally have self-destructive apprehensions in seeking the right job role, a sole reason why all the trouble starts. Here is the fact: a Stack Overflow report mentions that around 60.1% of developers employed have taken an online course in programming and around 86.8 % have learned a language, framework, or tooling without any sort of formal coursework.

Why do people think you need a degree?

It is a direct result of inertia, the inertia of a mindset that every good job opportunity requires a degree. For ages, degrees were looked upon as a form of assurance that a candidate has skills, knowledge, and the capability to succeed, particularly in a technical field like software development. Indeed, with guided coursework, one would learn the elementary concepts if not the nuances, and gain a 360-degree view of the domain in no time. Employers just want to be sure that the candidate has a sturdy foundation in the fundamentals and sound programming knowledge. Even the students would like to explore the many opportunities of developing marketable skills, expand their network and participate in many educational fairs that come with plum job opportunities, by pursuing a long-term course. But what is the assurance that the person has acquired hands-on experience in coding and can crack the tougher coding problems? “Regardless of the degree level in the requirement, it’s usually okay to not have that degree if you can show a history of success in the area relevant to the problems you’ll be solving at the company”, says Nick Larsen, a data engineer at Stack Overflow.

Therefore it all boils down to the fact that companies have personal choices depending on the requirements. While some companies are biased towards graduates from elite colleges, some companies hire people who have been to boot camps. As discussed, earlier, in the beginning, the job descriptions are meant to exploit the opportunity to be safe and this proposition works with companies that do not want to take chances. Python programming is a burgeoning field and as per a 2019 New York Times report, “ the surge in student demand for computer science courses is far outstripping the supply of professors, as the tech industry snaps up talent.” So, apparently, it would be foolish on the part of tech companies to deny self-taught programmers a chance to prove themselves. In this respect, IBM and Google have proven to be champions.

Having a Degree is not worthless though

Pursuing a degree or an online course is just one necessary condition, not a sufficient one. No, it doesn’t mean, you need to just drop out of your course and start learning everything on your own. You might end up as the first choice, unlike self-taught people who are chosen after a comparatively tougher process, which again depends on the company’s hiring culture and requirements. In fact, there is not really good enough information on this question to answer definitively.

The post Why Self-Taught Python Developers are Nobody’s First Choice? appeared first on .