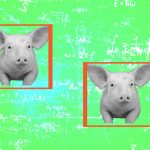 Is it possible to comprehend what a pig is feeling when it screeches or grunts? A group of scientists from Switzerland, Denmark, Germany, France, Norway, and the Czech Republic have discovered a means to decipher pig language. Researchers were able to capture the feelings of the pigs using artificial intelligence in the study released in Scientific Reports by collecting their songs in various settings.

The AI pig translator, which identifies a pig’s emotion through oinks, snuffles, grunts, and squeals, helps in better treatment of these animals on farms.

Using 7,414 noises from 411 pigs, the researchers created an algorithm to determine if the pigs were experiencing good, negative, or mixed emotions.

The recordings were made in a variety of scenarios encountered by commercial pigs, both favorable and bad, from birth to death.

Positive occurrences include piglets sucking from their mothers and being reunited with their families after being separated.

Separation, piglet battles, castration, and killing were among the emotionally draining scenarios.

“We show in this research that animal noises can provide important information about their emotions.” “We also show that an algorithm can be used to analyze and understand pig emotions, which is a big step toward bettering animal welfare in farming,” says Elodie Briefer in a report published by The Guardian.

The researchers discovered more high-frequency calls, like screeches or grunts, in negative situations after examining over 7000 audio recordings to determine whether there was a pattern in the noises while experiencing specific emotions.

Simultaneously, low-frequency noises such as barks and grunts were heard in instances where the pigs were experiencing positive or negative emotions. The authors found the circumstances between the extremes to be particularly intriguing. The researchers discovered a new pattern after a more thorough analysis of the sound data that indicated what the pigs felt in specific scenarios in greater detail.

The post How Can an Algorithm Tell the Emotions of a Pig? appeared first on .