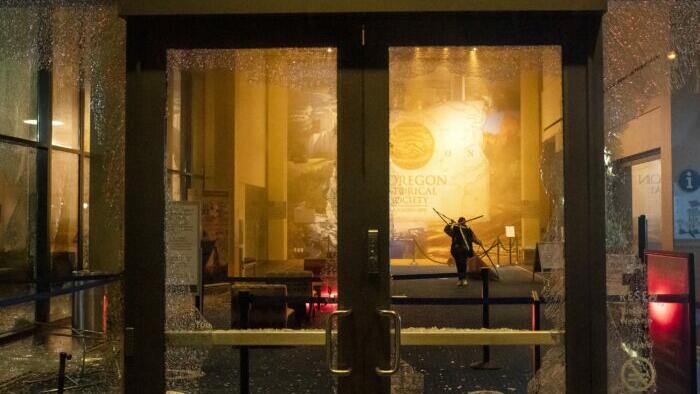 An Indiana man has been sentenced to 10 years in federal prison for playing a significant part in fueling violence during the 2020 Black Lives Matter (BLM) protests and rioting in Portland, Oregon.

Malik Fard Muhammad, 25, was sentenced on Tuesday for “repeatedly and intentionally jeopardizing the lives of police officers, destroying public property, and encouraging others to commit violence during protests that occurred in Portland in 2020,” according to the Justice Department.

In addition to 10 years in prison, Muhammad gets three years of supervised release. Although the DOJ did not mention the Black Lives Matter (BLM) protests in the press release, Muhammad was arrested in 2020 following evidence collected at a BLM protest turned riot.

During the BLM demonstrations that ended in violence on Sept. 21, 2020, Muhammad threw a beer growler made into a Molotov cocktail on a police officer sitting inside his vehicle. The officer jumped out when he saw the firebomb, which did not blow, hurtling towards him.

“Anyone who thinks they can get away with trying to murder police officers and destroy this city should think again,” Police Chief Chuck Lovell said in a statement last year announcing Muhammed’s arrest.

“Holding accountable those individuals whose sole focus is violence and destruction, like Mr. Muhammad, is central to our ongoing effort to support the rights of all Oregonians,” said Scott Erik Asphaug, U.S. Attorney for the District of Oregon.

The district attorney’s office said that Muhammad intentionally and repeatedly jeopardized the lives of police officers, engaged in activities that destroyed public property like smashing the Oregon Historical Society’s windows, while calling on others to commit violence.

“The right to protest peacefully is absolute,” said ATF Seattle Field Division Special Agent in Charge Jonathan T. McPherson. “But it is clear Mr. Muhammad didn’t come to exercise his rights. He came from out-of-state to bring violence to our community.”