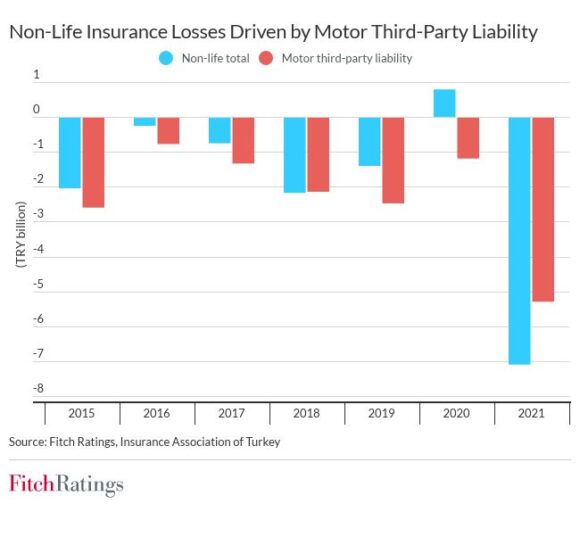 
Turkish insurers are facing one of their most challenging operating environments of the past decade, with earnings and capital adequacy likely to come under severe strain in 2022-2023, Fitch Ratings says in a new report.

According to Fitch analysts, the effects of macroeconomic deterioration, soaring inflation and the continuing price cap on motor third-party liability (MTPL) insurance could push some insurers below minimum regulatory solvency levels, forcing them to raise capital or to be acquired by stronger competitors.

Turkish CPI inflation rose to over 70% in May 2022 and Fitch forecasts it to remain very high (end-2022: 60%, end-2023: 55%). Sustained inflation at such high levels will have significant negative implications for insurers, pushing up the cost of claims and potentially leading to reserve shortfalls on longer-tail business lines. It will also erode customers’ disposable income, weakening their ability to buy insurance.

Fitch adds that insurers are unlikely to be able to increase their prices enough to cover the rise in claims costs. They are constrained by pricing competition and, for MTPL insurance, by regulatory price caps.

MTPL is the non-life sector’s largest business line by net premium written, and it has been the main drag on the sector’s underwriting performance in recent years. The price caps remove insurers’ ability to charge enough for the risk they are taking, forcing them to underwrite MTPL policies at a loss. High inflation will exacerbate this problem, and we do not expect MTPL pricing to be liberalised in the near future.

Turkish insurers’ ratings are pressured by Fitch’s Negative Outlooks on the Turkish sovereign (B+/Negative) and Turkish bank ratings, reflecting the insurers’ exposure to the challenges affecting the Turkish economy, their holdings of Turkish government and bank bonds, and their bank deposits.