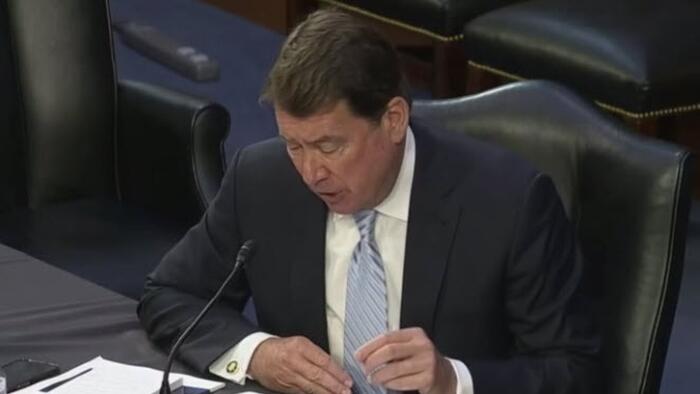 
At the end of May, amid a flurry of scapegoating over surging prices and plunging approval ratings, President Biden seized on an Oval Office meeting with Fed Chair Powell to argue that while fighting price increases is his top priority, that work was primarily the purview of the Federal Reserve.

“My plan is to address inflation. That starts with a simple proposition: respect the Fed, respect the Fed’s independence, which I have done and will continue to do,” Biden said.

Additrionally, Biden placed the blame for Americans’ suffering squarely on the shoulders of Russian president Vladimir Putin and his ‘Putin Price Hike’…

As we have noted numerous times, this is just farcical spin as the following chart shows consumer prices were accelerating dramatically well before the Russian invasion of Ukraine…

Democrat Chris Van Hollen of Maryland is having none of that at all as he affirmed Biden’s narrative during Powell’s hearing this morning, blaming the “three P’s” for inflation:

And definitely not over-zealous and massive spending by the Biden administration.

But having thrown The Fed under the bus in May, it appeared Chair Powell was not going to take that lying down as he responded surprisingly honestly to a clearly politically-angled question (fact)…

Sen Bill Hagerty (R-TN) addressed the Biden narrative, noting that “the problem [of inflation] hasn’t sprung out of nowhere,” before asking Chair Powell the following question:

“Would you say that the war in Ukraine is the primary driver of inflation in America?”

Fed Chair Powell’s response – which we note was completely ignored by many mainstream media outlets who were writing real-time transcripts of the hearing – was shocking in its frankness:

“No. Inflation was high, certainly before the war in Ukraine broke out.”

Ouch! So ‘Putinflation’ is not real after all?

As for whether Biden’s “strategy” of punting all responsibility for everything that goes wrong with the economy onto others, first Putin and now Powell, works we’ll just have to wait until November to find out. Here’s an advance look: