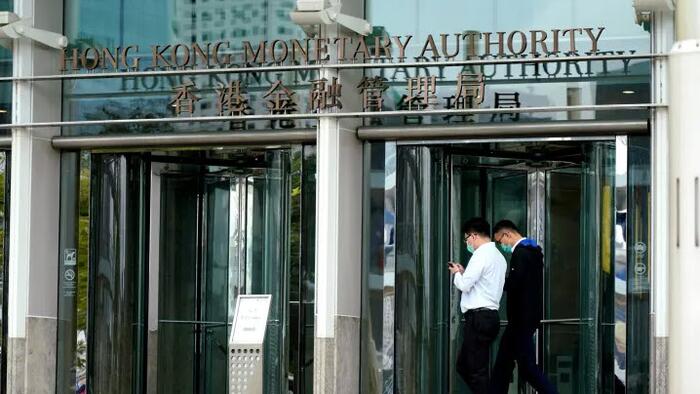 And today saw the HKD break below the lower bound of the peg, trading down to 7.8502/USD at its lows…

The main culprit behind the local currency’s slump is the carry trade which has been reignited by The Fed hiking rates and potential capital flight out of China/HK.

This is an arbitrage, where traders take advantage of differences in prices, selling a low-yielding product (the Hong Kong dollar) to buy a high-yielding product (the US dollar). In this case, the price difference is between the local borrowing cost known as the Hong Kong interbank offered rate (Hibor) and the US borrowing cost known as the Libor.

Simply put, traders are borrowing against the low Hibor, selling the Hong Kong dollar to buy the US currency for investments in high-yielding US assets. The difference between the two is widest since March 2019… and that is pressuring the HKD against its lower peg bound.

As more traders pile on to the carry, more pressure is placed on the Hong Kong dollar, causing it to weaken further against the US currency. As the chart above shows there has been some shift in the carry-trade-pressure since HKMA has stepped in.

Nevertheless, HKMA is forced to step in and as CNBC reported, HKMA’s Chief Executive Eddie Yue said last month that as it intervenes and funds flow out of Hong Kong’s system, local rates should rise, removing the incentive for market players to conduct “carry trades”, and hence keep the Hong Kong dollar trading within its band.

“All these are normal operations in accordance with the design of the Linked Exchange Rate System,” he said.

However, the size of the flows are starting to become significant… and are having less impact. According to HKMA, its aggregate balance will decrease to about HK$241.9 billion on June 23 (from HK$338 billion in May before the interventions began again).

That is almost HK$100 billion in reserves and The Fed’s plan to hike rates (as many as twelve more times this year) will do nothing to help ease the situation (especially since China will not be tightening its policy anytime soon) – meaning any USDs sold in defense of the weaker HKD will be battling global carry trade flows driven by The Fed’s tightening.

As we have detailed previously, China currently has a dilemma because it has to pick either to hike, and avoid capital flight, or cut and remain competitive with Japan, whose collapsing JPY means chinese exports are getting priced out of global markets.

The fund still has plenty of ammo to fight the carry trade pressure (for now) as we note the aggregate balance dropped to around HK$50 billion in 2019 after the last series of HKMA interventions to stop the currency weakening.

In 2018, as the HKD plunged on the same carry flow, the HKMA CEO reassured the public “Stay calm on the weakening of the Hong Kong dollar.” So far no such warning has been issued this time.