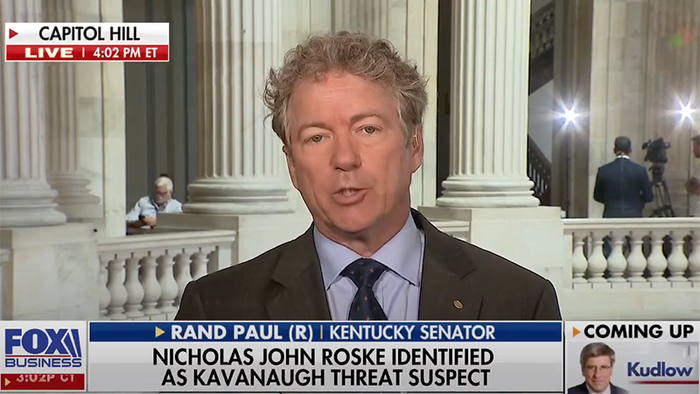 Senator Rand Paul reacted Wednesday to the arrest of an armed assassin outside the home of conservative Supreme Court Justice Brett Kavanaugh, noting that the White House and Democrats have actively encouraged such ‘crazy people’ to go to the homes of Supreme Court justices.

Referring to his own brutal attack at the hands of a crazed leftist a few years ago, Paul said “As a victim of politically motivated violence I’m particularly sensitive to this. I’ve been speaking out since the beginning.”

The Senator referred to the encouragement by Democrats and the White House of protests outside the homes of justices, noting “I’ve been saying it is dangerous for our justices, we shouldn’t be allowing crowds to disrupt the public, to be there at nighttime making noise. They should be arrested for disorderly conduct and be removed.”

“The white house steadfastly refused to condemn people outside of their houses,” Paul reiterated, adding “That is not peaceful protest. That is ginning up and encouraging, and intimidating the justices should not be allowed.”

“The Biden administration refused to have a full-throated condemnation of people gathering outside of justice houses,” Paul urged.

The Senator also hit out at the media, and so called ‘protesters’, noting that doxxing has to be punished.

“The concern is releasing justice’s addresses. Other networks put my address on the evening news,” Paul said, adding “They put global satellite pictures of my house on the evening news… encouraging crazy people. It has got to stop. We have to quit doing this to our justices. We should quit doing it to the elected officials as well.”

“We can have a civil discourse in this country but the people who are ginning up, encouraging people to be in front of a justice’s house, it’s wrong, it’s dangerous, and it will set up the milieu, the environment for violence,” Paul further warned.

Paul is correct, Democrats have encouraged protests outside justices’ homes in the past weeks, with Chuck Schumer even warning Kavanaugh that he will “pay the price” for his views:

Today, an armed man was arrested outside the justice’s home after issuing threats.

FLASHBACK to May 6: Nancy Pelosi called on people to actively pressure Supreme Court justices to try to influence the final decision.

At the same time, far-left groups were publishing the private addresses of justices’ homes.pic.twitter.com/8LadBrxNqi

Never forget that on May 10th, the official position of the Biden White House was to “encourage” protests outside of Supreme Court Justice’s homes.

Less than one month later—a pro-abortion terrorist shows up to Brett Kavanaugh’s house armed and ready to kill him.

Indeed, there are STILL people outside Kavanaugh’s house, even after the arrest, with police doing nothing:

The pro-abortion group made their way over to Chief Justice Roberts’ home. Again, police were outside the house. pic.twitter.com/1RplHsj9gI

The assailant, identified as Nicholas John Roske, told officials that he “wanted to kill” Kavanaugh, and that the motive for his intended attack was disagreement with the Supreme Court’s assumed plan to overturn Roe v. Wade.

A man was arrested with a knife and a gun outside Supreme Court Justice Brett Kavanaugh’s home. He said that he was intending to kill Justice Kavanaugh. pic.twitter.com/PrSvXZPpYP

A man with a weapon and burglary tools was arrested near Supreme Court justice Brett Kavanaugh’s home last night.

The unsealed arrest affidavit for Roske revealed that he was armed with a black tactical chest rig, a tactical knife, a Glock 17 pistol with two magazines, pepper spray, zip ties, a hammer, screwdriver, nail punch, crow bar, pistol light, duct tape, hiking boots with padding on the outside of the soles and other items.

The establishment media, in particular CNN, attempted to downplay the incident:

CNN’s Whitney Wild tries to deny that the man arrested trying to assassinate Justice Kavanaugh had a weapon “at all.”
She also tries to blame right-wing extremists for possibly trying to carry out the hit, claiming “the risk truly comes from both sides of this abortion debate” pic.twitter.com/fFYKYTA46G

While those who doxxed Kavanaugh refused to condemn the wannabe assassin and even attempted to use the incident in their favour:

Abuser Kavanaugh’s abusive groupies are delighted the man had a gun, a knife and pepper spray. 😏

Why’s the gun listed first? Everyone knows the gun is the problem — it’s the most dangerous weapon the lost attacker had.

Oh, Kavanaugh is a white supremacist & Zina Bash is too. pic.twitter.com/TN2dZSnqnt